Oppikoppi 2011: Soon to be 60, Hotstix is still strong, still bright 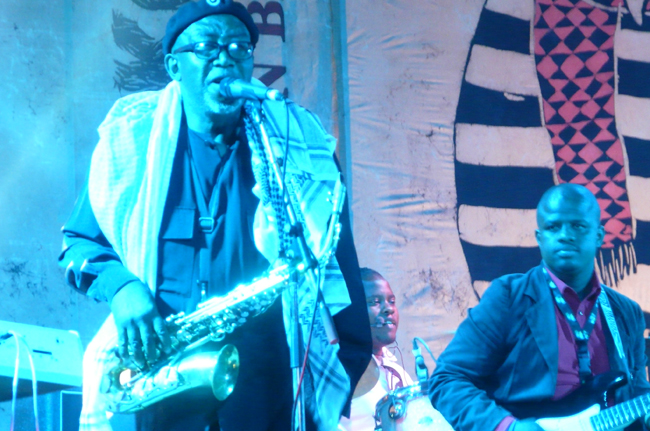 Sipho “Hotstix” Mabuse is a South African institution. Just ask any of the thousands of people who rocked to his great jive hits at the Oppikoppi Unknown Brother Festival in Limpopo. We managed to have a quick chat before his performance. By SIPHO HLONGWANE.

Sipho “Hotstix” Mabuse’s actual birthday isn’t until November, but it didn’t stop thousands of festival goers from yelling out an emotional (and dare we say, drunken) rendition of “Happy birthday to you”. Hotstix turns 60 this year, and what great career he’s had. On Saturday night, we saw why. He’s an electrifying performer – obviously not as sprightly as he was in the 1970s and 80s – but he captivates audiences today like he did back then. Quite simply, Oppikoppi loved Hotstix.

Before all that, we met briefly in the media tent to talk about his performance and, as it turns out, Hotstix loves Oppikoppi too. He said, “Oppikoppi is probably the most representative festival in SA because it caters for every genre and race. It is the most representative of South African music. So it’s always an experience you look forward to.

“For me it’s important that Oppikoppi retains its profile. It has a particular profile and style which it must keep. Everybody that knows Oppikoppi knows what to expect, and in most cases you don’t change a formula that works,” Hotstix said.

The flavour of this particular Oppikoppi festival was “Unknown Brother” and many newer artists were sprinkled into the line-up with performers like Hotstix. The styles were splendidly different – the likes of The Dead Will Tell and Not My Dog did metal, we had Dan Patlansky’s blues rock and Tumi & the Volume did their famous sultry Africa-laced hip hop.

The days when “mbhaqanga” and soul dominated, especially when it came to black performers, are long behind us. But Hotstix doesn’t find this threatening at all. “We shouldn’t consider it a competition,” he said. “The biggest concern for me is that in the media there is a very narrow focus on a narrow perspective of what South African music is. As a result, people are not exposed to other great musicians in South Africa.

“I know this country has great musicians. But very few of those artists are exposed to the South African audience. I wish more people would begin to expose themselves to SA music for its versatility and style. Hopefully the world will see that South African music isn’t just Miriam [Makeba] and Hugh [Masekela], but that there are many young artists who are making incredible music,” he said. But he did express disappointment at how rapidly money was coming ahead of music in the local industry. “You don’t just become a musician,” he said. “You are called to become a musician. You’ve seen so many people who have tried to be musicians and have failed dismally.

“The challenges today in music are much bigger than before. Those who go into music to make money, how long do they last? But if you are in it to make music, your calling carries you through.

“Music is not about entertainment, it’s about going out there and sharing your emotion and spirituality,” Hotstix said.

Hotstix shot to prominence in the late 1960s as part of Harari, a rock group he co-founded with Om Alec Khaoli and Selby Ntuli. The band was on the cusp of international stardom when the group fell apart. Hotstix would go on to launch a successful solo career. When we asked him what his plans for future were, he was cryptic. “What does the future hold for me? I’m in the future. I can’t speak about the future now, I’m already there,” he said.

Whatever he chooses to do, we’ll be there, lapping it up. Like the crowd on Saturday at Oppikoppi, as long as Hotstix is making music, we’ll be wanting more. DM