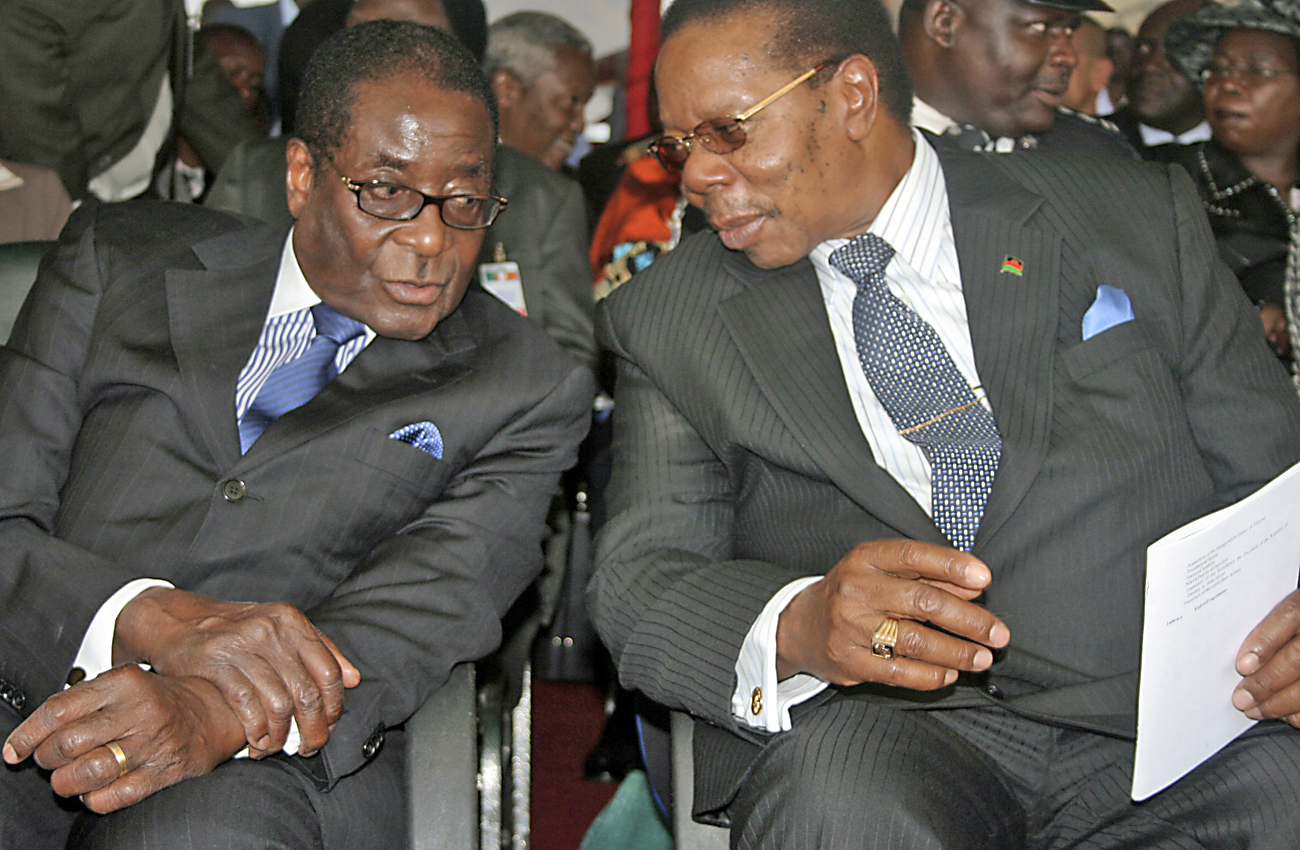 Malawi’s president likes to be known as President, Professor and Conqueror of Conquerors. His opponents call him autocrat, dictator and tyrant. Just who exactly is Bingu wa Mutharika, and why don’t Malawians like him very much? By SIMON ALLISON.

President Ngwazi Professor Bingu wa Mutharika’s name and titles reveal a lot about the man who rules Malawi. Born 77 years ago, his parents called him Brightson Thom – a rather colonial moniker which, as Mutharika grew older, didn’t fit in with his political aspirations. As Nyasaland became Malawi, so Brightson Thom became Bingu Mutharika; a more authentic name which served him well as the first Malawian employed in dictator Hasting Banda’s post-independence civil service.

The prefix ‘wa’ before Mutharika’s surname was added later, as a security measure. In voluntary exile – apparently as a precautionary measure to avoid Banda’s unpredictable purges – the ‘wa’ was designed to put Banda’s security forces off his scent, if they were indeed looking for him. Always in the lower case, the prefix has become the bane of sub-editors everywhere.

Mutharika educated himself in exile. While his title of Professor is honorary, he did obtain a PhD in economics from the Pacific Western University, which was in 1990s identified as a “diploma mill”. Returning to Malawi, he was appointed secretary general of the Common Market for Eastern and Southern Africa (Comesa), a post he held for six years before being fired for misuse of resources, abuse of office, gross insubordination and flagrant disregard for protocol; clearly all important qualities for a future Malawian president.

His first attempt at the presidency came in 1999, and was a dismal failure; Mutharika came last out of five candidates. Defeated, he rejoined the ruling party, which had unseated Hastings Banda in Malawi’s first democratic elections in 1994. Eventually, outgoing president Muluzi named Mutharika as his successor, to the consternation of party stalwarts. But after winning the election, Muluzi and Mutharika fell out, and Mutharika – while retaining the Presidency, of course – established his own party.

Mutharika wasn’t a bad president, in his first term at least. Under his watch, Malawi’s economy grew rapidly, and the country enjoyed food security for the first time in decades. He was rewarded with a convincing re-election in 2009, securing 55% of the vote, and in 2010 was chosen as chairman of the African Union. It was about this time that he awarded himself the title of Ngwazi, which means Conqueror of Conquerors and was last used by Hastings Banda

At this about this time things also started to get a bit weird.

Firstly, he married. Nothing wrong with that, although some would question the 27-year age gap between him and his bride, a cabinet minister. The problems were more about the style in which he chose to get hitched – the ceremony, which involved an imported limousine, brand new roads and a 28-tier wedding cake, cost around R22 million. Opposition figures and international donors were unimpressed.

At the same time, Mutharika was building an ornate mausoleum to house the body and possessions of his first wife. The president denies that the bizarre memorial, in the style of the Taj Mahal, was built with state funds, saying the millions of dollars needed for its construction came from well-wishers. The mausoleum was formally opened in December in 2010, with a stellar cast of African presidents in attendance.

And then there was the politics. Mutharika, wary of the impending expiration of his two-term presidential limit in 2014, began to groom his brother to succeed him. Ruling party MPs started to openly refer to Peter Mutharika as the president’s successor. “It is a fact that the incumbent president has greatly transformed Malawi…that is why we members from this side are of the view that Professor Peter Mutharika should stand in 2014,” said one MP. This reasoning is an almost open admission that a Peter Mutharika presidency would be a Bingu presidency replay. But to make way for Peter, the president had to get rid of his deputy, vice president Joyce Banda. Which he did, in no uncertain terms, although he couldn’t fire her from the vice presidency, as she’s an elected official, he expelled her from the party and has been taking verbal potshots at her ever since.

Mutharika also managed to alienate Malawi’s largest donors; a bit of a problem for a country that is heavily reliant on international aid. In the avalanche of secret diplomatic cables released by WikiLeaks was one from the British ambassador to Malawi which was deeply critical of the Malawian government, and of Mutharika in particular. Mutharika was offended and kicked the ambassador out of the country. “You see, if you don’t know, you my fellow Malawians, if someone insults me he is insulting you because it’s you who elected me your president… sometimes we should be bold enough to tell these people ‘take your money and leave’,” he said at a public rally. Which is exactly what happened; after Mutharika refused to back down, Britain announced it was suspending nearly R200 million of aid money to the country.

This was really the trigger for the mass demonstrations last week. Mindful that one man’s bruised ego cannot be allowed to determine economic policy – especially given that the economy’s not doing that well anyway – a coalition of some 80 civil society organisations came together to arrange the protest, which was always intended to be peaceful and within constitutional bounds. Notice was given to the government, who tried its hardest to prevent it from going ahead – requiring a R180,000 deposit to be lodged, obtaining court injunctions against it and sending thugs with machetes on the street the day before and the morning of the protest to intimidate potential participants.

But the protests went ahead. Inspired, perhaps, by the Arab Spring, the people took to the streets. The success of the Tunisians and Egyptians in getting rid of their autocratic leaders has become the model for resistance elsewhere – in Libya, Bahrain, Yemen, Syria, Jordan, Gabon, Swaziland… and now Malawi. But the failure of Ben Ali and Mubarak was also a salutary lesson for autocrats in how not to handle popular protests; a lesson that Malawi’s Mutharika has learnt well.

By disrupting the protests before they even began, Mutharika prevented the thousands of people from becoming tens of thousands demonstrating against him. By replacing the head of the army, he’s shifted blame for the deaths of at least 18 protesters onto the security forces, maintaining his own innocence. And by allowing the protests to degenerate into arson and looting – or using his own people to encourage the protests in that direction – he’s muddied the motives of the protesters, creating a veil of legitimacy for his crackdown.

And through it all, he’s maintained that he’s the reasonable one. In an address to the nation the day after the protests, Mutharika blamed civil society for refusing to enter into dialogue to solve problems peacefully. “Demonstration is not the answer. I am ready to discuss with you all these problems. Get organised into committees and inform me at State House so that we can resolve these problems.”

He was, however, less conciliatory the next day. “To overthrow a legitimate government is treasonous and you will hear from me soon,” Mutharika said in a broadcast speech. “I will smoke you out wherever you are because you have no right to destroy our peace.” At least five civil rights activists are now in hiding as a direct result of this not-so-veiled threat.

The protests were designed to curb Mutharika’s increasingly dictatorial tendencies, to remind the president that he was the merely the instrument of the people. Instead, the president has confirmed to all watching that his democratic credentials are nothing more than a fig leaf and that the future of Malawi is likely to be decided by how long he wants to hold onto power, and just how dirty he’s prepared to fight for it. DM