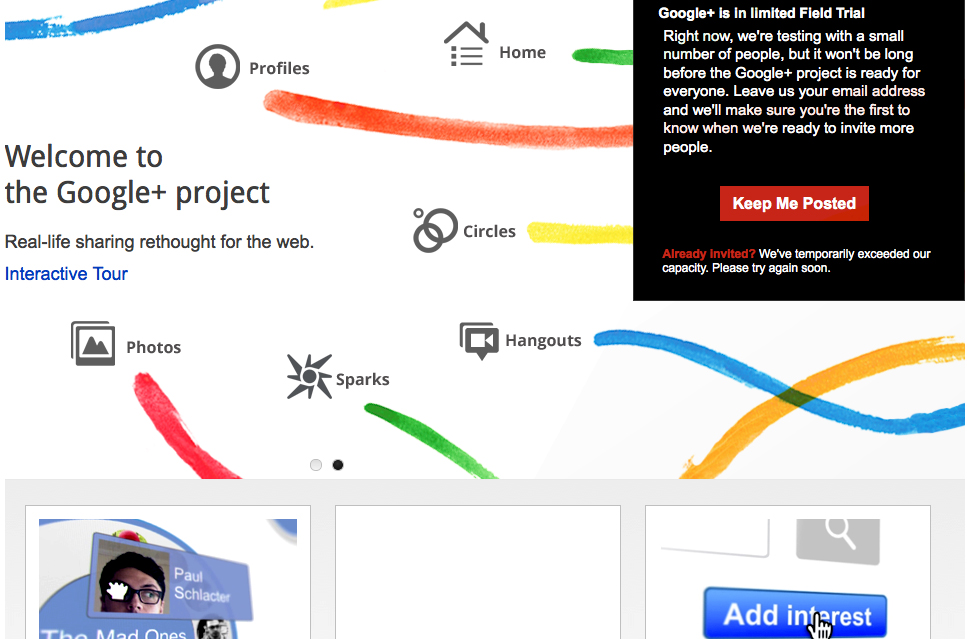 Hands up if you remember Google Wave, that next big thing on the Web that fizzled out and died a disappointing death. Then there was Google Buzz, another dud social network. Well, Google has learnt its lesson – and are now launching a third one, called Google+. Yes, we’re rolling our eyes. By SIPHO HLONGWANE.

Google doesn’t do social networking very well. If you discount email, which is oft-forgotten as a form of social networking, then the internet giant is absolutely terrible at designing platforms for people to hang out on.

Take Google Wave, for instance. It was a cumbersome, jumbled mess of email, instant messaging and animation that was utterly pointless. We already had Gmail for our mail, Gtalk for our instant messaging, Facebook for looking at our friends’ drunk photos and Twitter for, well, tweeting. Wave was entirely unnecessary.

It was the same story again with Google Buzz. This time, the chaps at Googleplex made a simpler interface that was embedded within Gmail, but yet again they failed to make it relevant to a normal person’s life. Buzz was (and still is) ugly, counter-intuitive and cluttered. Unlike Facebook, it couldn’t strike the balance between important conversations that last for days and breaking activities right on the stream. Unlike Twitter, it was a closed and stuffy network. Most of the people on my Buzz feed just throw their tweets up onto it. I can go onto Twitter for that.

You’ll forgive this reporter then for not investing much confidence in Google’s third stab at a social network. The newest attempt is called Google+ and very confidently tries to take on Facebook and Skype all at once.

One of Facebook’s enduring failures is how hard it is to divide people so that only certain groups can see certain activities and parts of your profile. The biggest social network is intuitively designed so that everything that you put up on it is automatically viewable by all your “friends”, which can be a bit of a bother if you’d rather some people didn’t see everything (some people WILL invite their bosses and then post pictures of their weeknight bacchanalia).

Google+ attempts to cure that by being designed for sharing information among smaller groups of people. You can subdivide your contacts into “circles” and each circle only sees what you choose to share with it.

The service features five basic services: circles, huddle, instant uploads, sparks and hangouts. The last service is a direct challenge to Skype – it allows up to ten groups of people to video chat together. Huddle is a group texting service, not unlike Beluga, according to the Washington Post. Instant upload is exactly that – you can upload photos and suchlike to a private album, and you can then choose who to share it with.

No social network these days would be complete without some sort of newsfeed function, and that is what sparks attempts to do by acting as an interactive RSS feed.

Users need a Google profile to sign up, and the service is being rolled out very slowly.

Essentially, Google+ took all the things that worked well in other social networks and plugged them together into a single interface. Even the looks are borrowed from Facebook. But Google tried that already with Google Wave and it was just too daft to work very well. Google cured its early mistake of designing ugly social networks by hiring Andy Herzfeld, who was on the original team that designed the Apple Macintosh.

Ever since social networking took off in a big way with Facebook, Google has been eyeing this development warily. A company which is heavily invested in internet search and cloud computing has come to feel threatened enough by social networks like Facebook that it wants in on the game. The attempts are understandable, and it may be early days, but it doesn’t feel like they’ve got it right this time either.

Google+ does what everyone else does. What’s new about it? Admittedly, they haven’t taken the “Facebook killer” route which is always a recipe for failure – Twitter isn’t the phenomenon that it is today because it tried to kill Facebook. But there’s nothing that feels even vaguely novel about Google+.

Facebook recently announced that about half of its 500 million users access it via mobile devices. Twitter itself started off as a text service. Both social networks are very friendly towards mobile devices and owe their exponential growth around the world to that. Google+ doesn’t seem to take this into its calculations at all. It’s as if Google just want to cater for people who already use Gmail. What are the chances that those people are already on Skype, Facebook and Twitter, not to mention Gtalk?

MySpace, Youtube, Facebook, Twitter, Skype and even Google itself were all developments that would redefine the online experience and all of them were designed by a few people who had a really good idea. Very few corporation-driven, top-down ideas thrive on the Net. Google’s last such successful attempt was probably Gmail and that was because there was a gap in the market for a web-based mail service. These big ideas driven by big corporations tend to be too inflexible and deaf to what the user really wants to succeed. How will Google+ escape that? DM