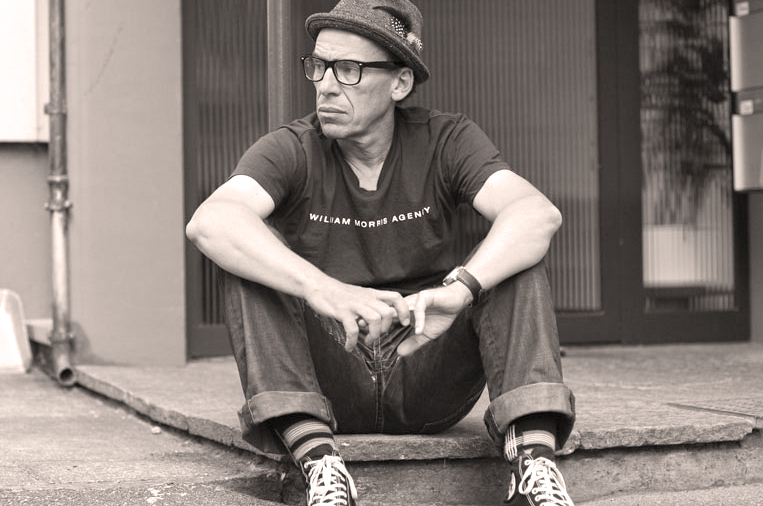 His direct access to stars like Pamela Anderson, Sharon Stone, Courtney Love and Sean Penn was astounding, but even more remarkable was Tom Kummer’s talent for getting them to open up and reveal their deepest selves. That was before he crashed and burned because of a trifle called “the truth”. By MANDY DE WAAL.

Not quite Hunter S Thompson, Kummer was more James Frey with a smattering of Howard Stern,  which only enhanced his status as a legendary LA correspondent for Europe’s top magazines. In Europe in the nineties journalists struggled to get direct access to Hollywood stars and a lot of German and Swiss media rehashed interviews with US celebrity glossies to feed the hunger for the most intimate of news about movie headliners. In that world, Tom Kummer was a prodigy.

He had spoken to Pamela Anderson about “Neuromancer”, that cyberpunk novel written by William Gibson about the ultimate hack. In his interview with Mike Tyson, the ferocious heavyweight boxer had quoted Nietzsche. Who knew Tyson could pontificate on a philosopher whose work would change the way society thought about existentialism and nihilism?

Predictably, Kummer’s piece on Courtney Love included talk about genitalia and breasts, but it was the fact that he coaxed her into opening up about joyless sex and disillusionment that saw the journalist’s work published in top German magazines like Der Spiegel.

The Guardian reported that Kummer revealed never-before-seen depth in Bruce Willis who said of himself: “I understood pretty early on that we do not advance through morality, but immorality, vices, cynicism.”

Watch the trailer of “Bad Boy Kummer” (in German)

Kummer’s face-to-face interviews with mega-stars like Sharon Stone, Sean Penn, Kim Basinger and Christina Ricci were revelatory to the point of being almost too good to be true. When Tyson told Kummer he had eaten cockroaches in prison as a source of protein it was beyond sensational – it was unbelievable. That was because Kummer had made that all up.

Just as he had invented his conversation about Kierkegaard with Sean Penn and fabricated Sharon Stone inviting him to look between her legs, Kummer had lied about Charles Bronson believing plants could communicate. Kummer’s celebrity interviews were nothing more than the product of his imagination and he was nothing more than a lying fake who had never even met any of those celebrities.

The bad boy of journalism’s reign of make-believe came to an end when Kummer pushed the boundaries of credibility too far with a spectacularly sensational interview with Christina Ricci. No sooner was the piece published in 2000 when a rival magazine broke scandalous reports about Kummer’s “celebrity scoops”. Kummer was unrelenting and refused to apologise. Instead, he claimed to have invented a new genre of reporting called “borderline journalism”. Kummer later declared that after his first fake interview with Pamela Anderson, the acclaim and attention he received was a drug that would prove far more addictive than seeking the truth. The journalist who traded the truth for his own celebrity is now a tennis coach of sorts. “He travels to Los Angeles, where Kummer now teaches paddle tennis, an aptly fraudulent sort of sport that uses smaller courts and less bouncy balls than the original,” is how The Guardian put it.

Fame hasn’t altogether deserted Kummer though. The disgraced journalist is now the focus of a German documentary aptly titled “Bad Boy Kummer”.  A film by Miklós Gimes, it looks at how the man with a penchant for invention was able to trick everyone, the media and celebrities included, and tragically exposes what a major talent he was and how his skilful imagination and writing were utterly wasted.

“I asked myself: ‘Who is this person? Is he your classic conman or is he a tragic figure? Did he destroy his own career out of an inner drive that is stronger than him?’ These are the questions I attempted to address in this movie,” says Gimes, who at one time was Kummer’s deputy editor-in-chief at Tages-Anzeiger Magazin (today called Das Magazin) and a magazine supplement to the Swiss daily newspaper Tages-Anzeige.

Gimes says Kummer grew up in the sixties in Berne, Switzerland, but immigrated to Berlin, Germany where he discovered writing. “He was hired by Tempo, the trendiest magazine of the early nineties. He engaged in extreme activities, always on the frontline researching in slum areas and in the drug milieu.” In 1993 Kummer and his girlfriend headed off to Los Angeles where he began penning his infamous celebrity interviews.

“Reading them now you realise that they are about his loneliness and his search for the meaning of life. Over the course of time, his stories became increasingly daring, bold and out of touch with the real world. He began to invent everything, even portraits and reports until he was exposed due to his own carelessness,” says Gimes.

The Swiss and German media that published Kummer’s now notorious celebrity interviews allowed little time for introspection and didn’t deliberate on their involvement in the making of this ‘bad boy’. A modest amount of fact checking would have easily uncovered Kummer’s inventions. Instead, the sensational pieces were readily placed in publications because they provoked massive reader interest, were much quoted by other media and in some instances were syndicated.

“The Kummer case remains a minefield,” says Gimes. “His former bosses no longer want to be reminded of him. In their eyes, Kummer is a notorious crook, in the best case, a nutcase who lost his grip.”

Gimes repeated advice to Kummer during the making of the movie? “It is hard to unveil the final truth, but it’s worth it.”

But what of the celebrity interviewees – Stone, Penn, Anderson and Tyson – who never came forward to deny conversations with Kummer about Kierkegaard, Nietzsche and “Neuromancer” as nothing more than invention? We’ll have to wait and watch, but it isn’t hard to imagine they liked being portrayed more cerebrally, more philosophical and having more depth than may actually be true. DM