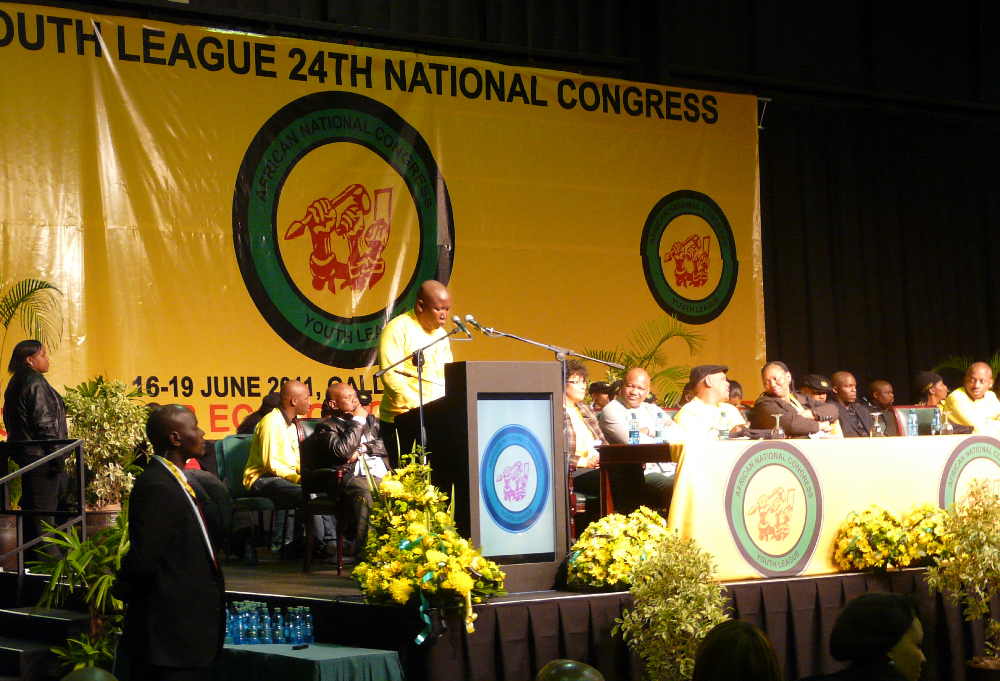 If there were ever any doubts about who calls the shots in the ANC Youth League (and there weren't), they were laid to rest on Thursday. Julius Malema was the very picture of control when he delivered his political report to the organisation's elective conference. Whether telling delegates how to behave, or very generously patting Jacob Zuma’s back, he held the delegates in the palm of his hand. Still thinking about running, Lebogang Maile? By SIPHO HLONGWANE.

The ANC Youth League’s last elective conference, the one in 2008 that went to pieces in Mangaung, did a lot to damage the image of the League. So said ANCYL President Julius Malema when he addressed the conference on Thursday. It is clear that the chaos of the last congress weighed heavily on the minds of the Youth League’s executive. Malema dwelled on the issue of discipline and unity within the organisation for a good portion of his speech. The money quote: “Nobody is going to disrupt the conference in my name.”

And it isn’t hard to see how he plans to prevent that. Malema has authority by the bucket-load within the League. Not to mention popularity as well. There was an awkward moment before Malema’s speech when his rival Lebogang Maile spoke. The Gauteng MEC’s salutations were met with chants of “Juju! Juju!” When Malema got onto the podium, he warned delegates to greet “in the ANC fashion” and not to factionalise. Unlike Andile Lungisa, Malema was immediately obeyed.

Malema really fired up when he dipped into the media. Over 600 journalists applied for media accreditation and according to him, this was so we could see the delegates booing President Jacob Zuma. That didn’t happen when the ANC president walked into the conference hall with Malema. Quite the opposite – he received a huge welcome. Malema spoke about the ANC Youth League supporting Zuma when it was unpopular to do so, and promised Zuma that his protectors from the media were the ANC Youth League. It was a fantastic strategy to position the media as the enemy of ANC unity.

Maile also received comfort from Malema. “He was my leader when I was at Cosas,” Malema said. “And now, I am his leader.” People would be allowed to back whatever candidate they liked, Malema assured the delegations, and that right would be protected. But keep in mind that he said that against a backdrop of conference discipline. Malema only mentioned Maile’s possible supporters (in a roundabout way) when he was speaking about how everyone should behave themselves. Even when he alluded to the fact that his presidency may be challenged, Malema left no doubt in everybody’s minds that he was in control.

The bulk of Malema’s long and eventually rambling speech focused on his economic ideas for South Africa. Yes, redistribution of land featured very strongly. Malema has been the only prominent South African to push the “without compensation” angle to land redistribution, and he repeated this position again at the conference. Since willing-buyer-willing-seller had failed to transfer enough land to blacks, the government should just take it, he said.

Oh, and the young people should only have one partner. Not many. And no, this message isn’t aimed at Jacob Zuma. “Every time they want to undermine this message, they say it is about Jacob Zuma. It is not for Zuma, it is for you,” Malema said. Zuma’s polygamy is allowed because he’s an elder, and not a youth “living in risk conditions”. Feel free to insert your own puzzled “hmmm” here.

Malema’s performance will have given Maile very little comfort. Malema is clearly well-loved, he is making unity a core issue, and his supporters are mobilised and ready to crush any challengers. This conference belongs to them – there’s really very little to suggest that there may be an upset here. Not for the man who can end up his opening address with a song – strangely reminiscent of another one of recent celebrity – containing the phrase “shoot the stray dog” in isiZulu. DM