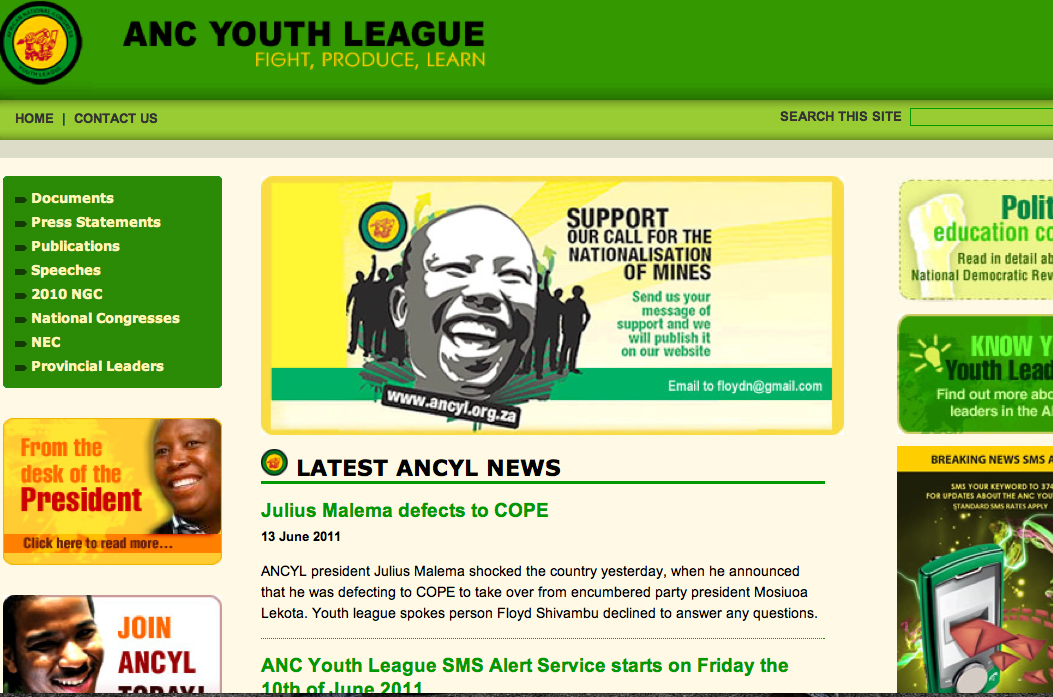 “Julius Malema defects to Cope” was a cute and obviously fake breaking-news item welcoming visitors after yet another hack attack compromised www.ancyl.org.za.  It didn't stop it from spreading like wildfire across Twitter on Monday night.  By MANDY DE WAAL.

The cyber compromise came days before the league’s national elective council, but didn’t fool local Twitter users who were quick to point out that the announcement was the work of hacktivists. SA’s Twittersphere was a flurry with ‘breaking news’ carrying links directing people to the ANC Youth League which featured the headline: “Julius Malema defects to Cope”.

News of the hack was broken by @Sinudeity, and was quickly re-tweeted by @gussilber who has some 5,855 followers. From there news of the hack reverberated through the Twittersphere.

The as-yet-unidentified hacker posted a note on the home page which read: “ANCYL president Julius Malema shocked the country yesterday, when he announced that he was defecting to Cope to take over from encumbered party president Mosiuoa Lekota. Youth league spokes person Floyd Shivambu declined to answer any questions.” The hack came just days before the ANCYL was due to meet in Midrand for its national elective conference this Wednesday.

The web attack wasn’t the only onslaught on Malema as the ANCYL prepared to meet and decide on its leadership.  Earlier this week a leaked Cosatu document saw fingers pointed at the ANCYL for what was seen as a campaign to oust both And president Jacob Zuma and his secretary general Gwede Mantashe.

The Sunday Times reported that the Vavi-penned document warned of SA becoming a banana republic. “If they succeed in this campaign, the ANC as we have known it will be history. Our country we love so much will go straight down the direction of a banana republic. The current challenge of corruption will be institutionalised with a risk that the very country will be sold to the highest bidder,” Vavi’s report read.

Soon afterwards the tripartite-bashing baton was passed from Cosatu to the South African Communist Party which resumed the war of words against Malema. The SACP’s Blade Nzimande didn’t mince his words when he said the youth leader was causing great harm to the ruling party.

“We are dealing with an anti-worker, anti-left, pseudo-militant demagogy that betrays all of our long-held ANC alliance traditions of internal organisational democracy, mutual respect for comrades, non-racialism and service to our people,” said Nzimande as reported on TimesLIVE. “It has created space for an anti-majoritarian, conservative reactive groundswell that seeks to tarnish the whole movement, portraying us all as anti-constitutionalist and as narrow national chauvinists.”

Tripartite spats aside, what of the likelihood of Malema ever crossing over to Cope? The fake news of the defection was met with much mirth on Twitter. Given that Cope is on record with calling Malema a “village idiot”, there is probably greater likelihood of Mbhazima Shilowa taking over the youth league than there is of Malema heading up Cope.

This isn’t the first time that the ANCYL website has been hacked, and it certainly is unlikely to be the last. In March this year the website was hacked and featured a fake note bearing the ANCYL leader’s name in which it was said he was stepping down. “After much thought, I Julius Malema have decided to step down as ANC Youth league president,” the note read. The hack took place before Malema was interviewed on a local radio station.

In May during the run up to the local municipal elections the site was again compromised. The digital fingerprints left behind included the posting of Malema’s matric results and a digitally altered photograph showing Zuma as a puppet master with Malema as his puppet.

Despite wishful hacker thinking about Malema’s departure, broadsides from the tripartite alliance and internal challenges to his throne Malema is expected to retain his leadership when this week ends. DM