Another Zuma-vs-Zapiro cartoon battle, another outrage in the wall 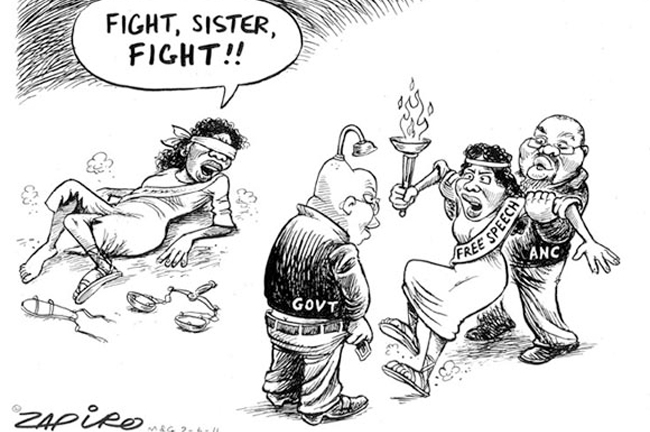 On Friday, the Mail & Guardian published another controversial cartoon by satirist Zapiro. Even though the rhetoric has subsided somewhat since the tempestuous days of 2008, little has changed between President Jacob Zuma and Zapiro. By SIPHO HLONGWANE.

The cartoon was something of a pastiche of an earlier work published by the Sunday Times on 7 September 2008 by the popular cartoonist Jonathan Shapiro. That explosive cartoon depicted Jacob Zuma unbuttoning his trousers in front of a prostrate Lady Justice, pinned down by Julius Malema, Blade Nzimande, Zwelinzima Vavi and Gwede Mantashe. There was little doubt in anybody’s mind what message this cartoon was intended to evoke.

The most recent cartoon shows Zuma in a similar position of undress, with Gwede Mantashe now attempting to hold down Lady “Free Speech”. Again, the metaphor of forceful violation is unmistakable.

Since 2008 the ANC, the Young Communist League and Zuma have brought litigious actions against Zapiro for cartoons, calling them defamatory and overstepping the bounds of the right to free speech. The YCL’s action before the South African Human Right’s Council was tossed out in 2010 after the council found that Zapiro didn’t infringe on anyone’s rights in his depiction.

The other court actions against Zapiro with respect to the 2008 cartoon have yet to be resolved.

The ANC responded much as it did last time around. ANC spokesman Brian Sokutu said, “Not only is the cartoon in bad taste, it borders on defamation of character in the way that it portrays the president [of the ANC].”

Sokutu said the ANC was considering further legal action against Zapiro: “We don’t have issue with any South African expressing themselves in any way, but we do take issue with this depiction. We also note this is not the first time Zapiro has portrayed the president in this way.”

Speaking to News24, M&G editor Nic Dawes said he would not apologise for the cartoon. “The cartoon was strong, tough and disturbing and an attempt to deal with a disturbing issue,” he said.

Zapiro told the Daily Maverick he didn’t allow any of these legal actions to weigh on his mind when he drew the new cartoon. “I would hate to think that the first thing I think about when doing a cartoon with a strong message is being sued,” he said. “I don’t do hard-hitting cartoons with that in mind. I did it like this because I am beyond angry with what is happening in the country right now, and with the ANC.”

What Zapiro did consider in far greater detail was how the use of the rape metaphor might offend rape survivors. He told us that after meeting with several such survivors after his 2008 cartoon, they would eventually accept that the imagery was justified. Zapiro said, “This is not the kind of metaphor I would use every day. Look, the dictionary definition of rape includes abuse of institutions. At the moment I feel outraged by the Protection of Information Bill, how it is being rammed through Parliament by the ANC and the obvious background influence of the security apparatus in passing this bill. There’s also the media appeals tribunal as well.”

Zapiro said his cartoon wasn’t intended to be taken literally. “It is indeed a metaphor,” he said. “It is something most newspaper readers would understand. Even readers with a passable understanding of newspapers would be able to see this is a metaphor. How anyone could take this cartoon literally is beyond me.

“I had no qualms about offending people in the [2008] cartoon because it was in fact an attack. But I certainly tried not to gratuitously offend women with the cartoon,” Zapiro said.
Aside from the hearing before the Human Rights Council, none of these cases has seen conclusion and it is difficult to predict which way our courts will rule. But the ANC and Zuma’s case against Zapiro do seem to stand on shaky ground. In its judgment on the 2008 case, the council said it was public knowledge the tripartite alliance partners were calling for a “political solution” to Zuma’s legal troubles. It also found Zapiro had acted with “bona fide artistic creativity, in the public interest”. It seems the arbiters of any cases brought against Zapiro this time would have difficulty finding otherwise. After all, the message portrayed in the latest cartoon is exactly the same.

However, nothing is set in stone as yet. The ANC is merely consulting with its legal people. It may decide that it has bigger fish to fry, and let Zapiro be. Or it may not. But it does smart a bit, knowing we have a president who can’t take harsh, but funny, criticism on the chin. DM