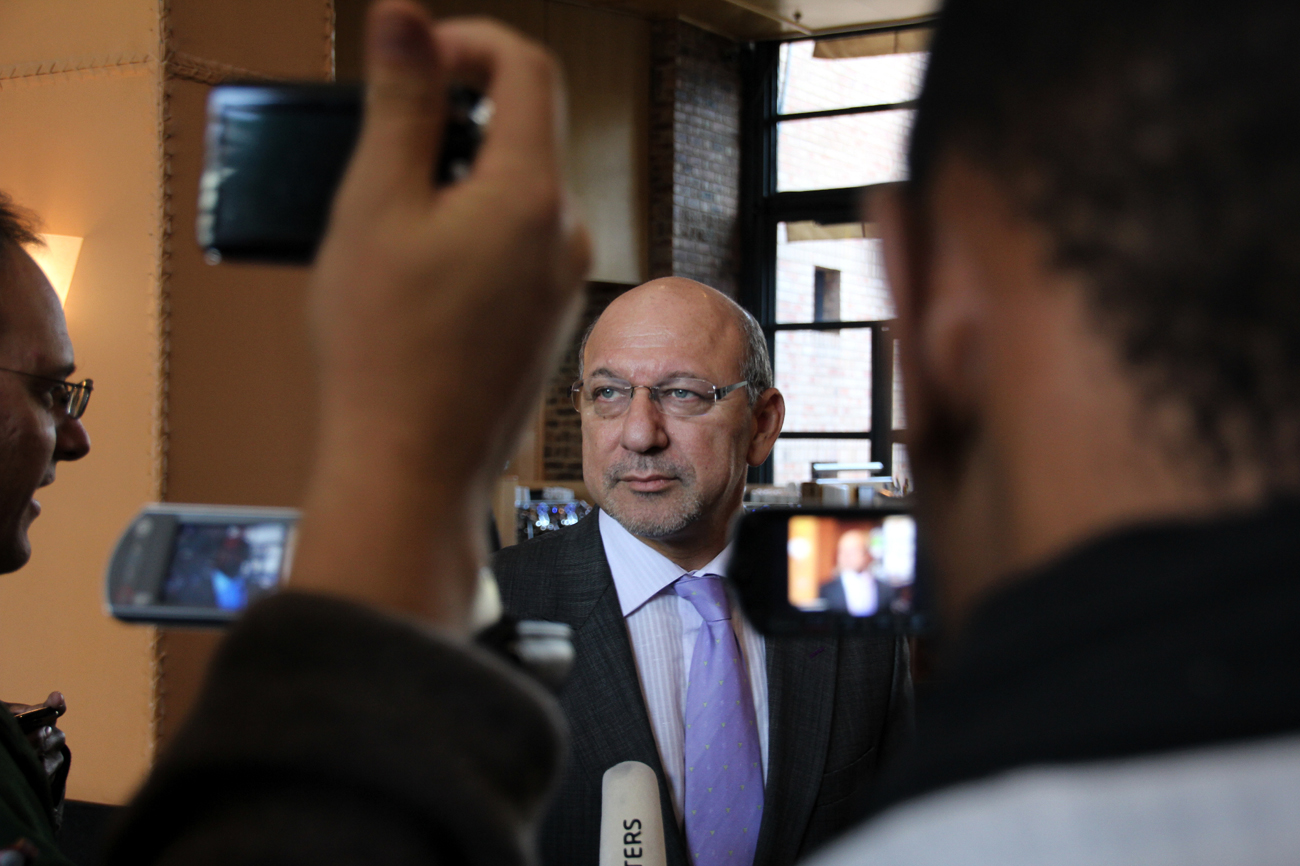 Trevor Manuel is definitely, absolutely not running for the top job at the International Monetary Fund, he told a hastily-convened press conference in Rosebank on Friday. His big battles are still very South African. What we did get was a glimpse of, though, are the obstacles that Manuel would have faced had he campaigned for managing director at the IMF, and what sort of institution he would have inherited had he made it. By SIPHO HLONGWANE and PHILLIP DE WET.

So that’s that, then – despite some poorly-sourced wire reports earlier in the morning, minister in the presidency and the head of national planning commission Trevor Manuel said: “I’ve decided not to avail myself”. So much for all the speculation about an African candidate, a Brics candidate, and that Manuel could take up the position recently evacuated by Dominic Strauss-Kahn.

We quickly got the sense that Manuel would much rather be at home at the moment. “I’ve never asked for the job,” he said. “I never put my hand up for the job. I’m actually exceedingly well-rooted in the country. I’m not even sure that I’d like to live in a northern climate. It’s not a decision that I’d ever take as an individual. I would hazard that Cabinet would give me the backing if I required it. The AU was speaking of an African candidate [at a recent meeting in Addis Ababa]. I would hazard that my name would be one of not too many in there.”

Manuel has stated before that he’d like to be around for his children a bit more – which would be a bit difficult if he’s working from Washington DC – but he’s also got a mammoth battle on his hands at the ANC. It involves a certain man by the name of Jimmy Manyi.

The ANC has of late leaned heavily towards a new wave of racialisation, and Manuel has positioned himself as the old-guard, non-racial leader within the party. He came out swinging against Manyi in a scathing open letter when the “too many coloureds” drama hit a crescendo. He is obviously very worried about what would become to the party should those who seek to completely racialise the ANC succeed.

But Manuel did have some thoughts about the IMF, and the issues that the organisation faces in its work. He believes that the continued dominance of European faces at the IMF is unsustainable. “I think a lot more should have been done to persuade Europeans that this birthright [IMF MD] is not a birthright that should have found resonance in an institution as important as the International Monetary Fund,” he said. “If because President Zuma happens to be Zulu-speaking, and we as South Africans say henceforth the president of South Africa should be Zulu-speaking, it would be quite bizarre. If you don’t have an open contest about these issues, it would be quite bizarre. Why, in the global context, do you accept that? That’s a question that the Europeans should answer about themselves and about the world.”

“We must continue to campaign for a change in that regard. We must also begin to put emphasis on the changes in the global economy because there clearly is a contradiction between an economy that is as globalised as the one we live in now and institutions that are still premised on the events of 1944.

The closing date for candidate submissions is Friday, and it is looking increasingly likely that it will become a contest between Mexico’s central bank boss Augustin Carstens and the French finance minister Christine Lagarde.

That leaves Manuel free to concentrate on domestic issues, like the upcoming ANC elective congress. From which he needs to emerge with a strong base of voters behind him, if he is to make any real dent in ANC policy or culture. We’re pretty sure he can pull that off, but then we’re more than a little biased. Manuel remains one of our favourite ministers. DM