The moment in SA's reality, according to Vavi

The moment in SA’s reality, according to Vavi 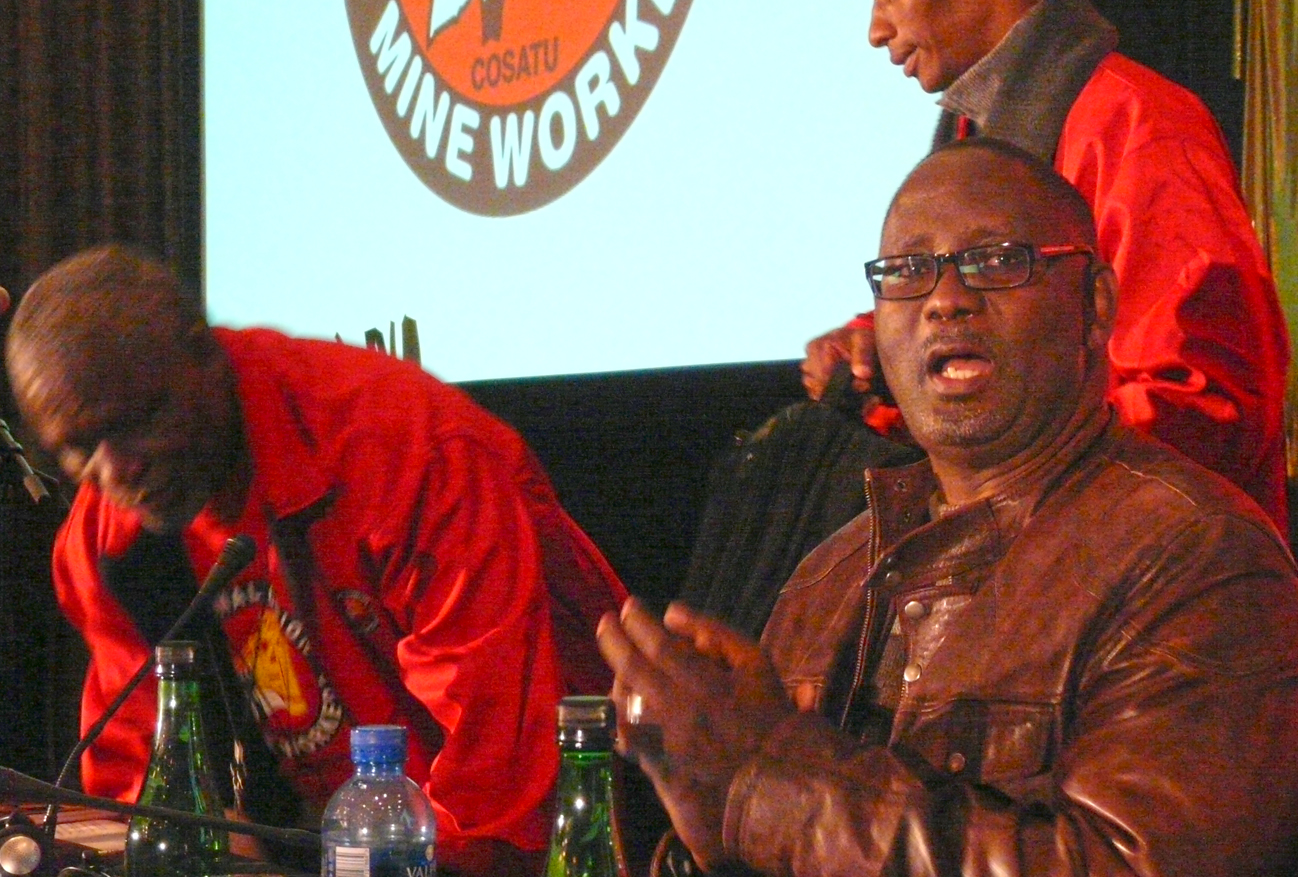 One imagines it would have been easy for a tripartite alliance partner to be generous in its post-election analysis. The ANC won a diminished but still convincing majority of votes after all. But gratuitous triumphalism has never been Zwelinzima Vavi’s style. In his speech to the National Union of Mineworkers, he reserved his fighting words for the Democratic Alliance, but there were plenty of warnings for the ANC. By SIPHO HLONGWANE.

You’d have expected that in his first major speech as secretary general of the Congress of South African Trade Unions since the organisation threw down the gauntlet to the ANC over the Protection of Information Bill, that Zwelinzima Vavi would have spent time dwelling on the potential threat to union members presented by the bill. But he didn’t. He elected to deal with the election first, and what it meant for Cosatu.

He was addressing the National Union of Mineworker’s central committee in Boksburg. NUM is one of Cosatu’s most vocal (and at times, militant) affiliated unions.

It is rather interesting to dip into Vavi’s (read: Cosatu’s) assessment of the election results, and to get a sense of what South Africa’s single most powerful political organisation thinks of the elections. In short, Vavi is not impressed in the least with what he sees as unwarranted triumphalism by the DA, given that they only won 23% of the total vote. Vavi laid into the media, saying “these analysts have tried hard to convince themselves that the party with 62%, despite these economic challenges, has lost and that the one with 23% has won. The confidence of the black working-class in the ANC flies in the face of those who seek to attribute the fact that the black working-class majority still votes for the ANC to some nostalgic national liberation symbolism and history.”

Vavi went on to label the condemnation of “black people and Africans in particular for voting for the ANC” as nothing more than “naked opportunism and racism” by the opposition party and analysts.
But despite coming down heavily on the side of the ANC in his analysis of the local elections, Vavi didn’t sway once from his usual script of condemning the weaknesses of the post-Polokwane ANC. He did have a very narrow space to navigate – on the one hand, cheering the ANC’s victory and on the other not slackening back on his condemnation of the trends in the ANC that he’s been sounding alarm bells about for a while now – and he did it superbly.

The bit where he pulled back after congratulating the ANC on its local elections is worth quoting at length:

“We need to start asking tough questions after these elections,” Vavi said. “Chest-thumping and denialism will only lead to complacency. The people have given us a clear and categorical message – their vote is not unconditional. They have told us we must pull our socks up and not take their vote for granted. They want to see a movement hard at work changing their lives for the better.

“They have told us they hate divisions and factionalism that consume all the energies of leaders instead of using every ounce of our strength to build a better life for all. They have told us they are sick and tired of inefficiency at all government levels, mainly caused by our slate politics that have sidelined talented individuals in favour of those who come from the more powerful factions.

“They are tired of the endless leadership contests that are so removed from the need to confront poverty, unemployment, growing inequalities. They have told us they are not preoccupied with 2012 [ANC elective conference], but with their (personal) plight.

“These elections were a huge wake-up call to the ANC-led liberation movement. If there is one message we should heed from these elections is that the national liberation symbolism and history will eventually wane and mean nothing to a hungry stomach and there will always be readily available opportunist parties like the DA willing to prey on our people’s hopes and aspirations for a better life, including appropriating the liberation symbols they rejected not so long ago,” Vavi said.

After condemning the South African Communist Party’s approach to key economic questions, Vavi said the ANC itself wasn’t completely free of mistakes. “The post-Polokwane ANC leadership has also committed some serious mistakes, ranging from dithering and steering clear of taking bold decisions, openly attacking the workers’ federation and a failure to consistently drive the Polokwane resolutions and the five priorities of the 2009 Elections Manifesto,” said Vavi.

From the ANC’s perspective, the message was clear, but not very different to one they have heard before – Cosatu is unhappy with a lot of things, but not so much that it would consider rupturing the tripartite alliance. Vavi spent a bit of time analysing the recent rise of the right wing in Europe, saying this was because the left had failed workers. He urged the ANC not to let that happen in South Africa. Again, we couldn’t help feeling this strategy serves only to weaken Cosatu’s stance against the ANC in the long term.

And the verbal beat-down Vavi handed to the DA can only serve to reinforce the position, for the millionth time, that Cosatu can really take a serious beating from the ANC and still consider life outside of the tripartite alliance a lot less healthy than inside it. We don’t imagine this speech, as powerful as it was, will give Gwede Mantashe and Jacob Zuma sleepless nights. DM