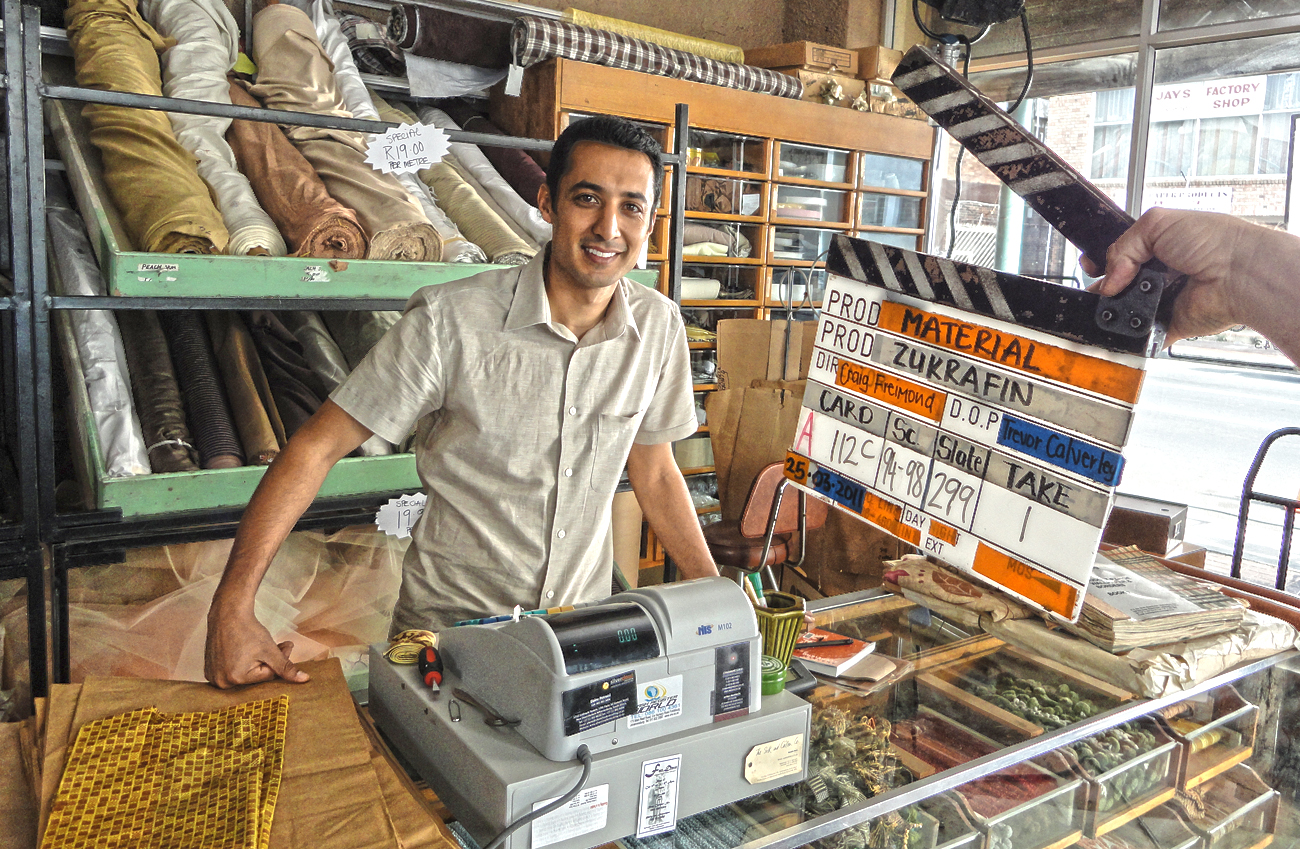 The local film sector’s crying out for a feel-good movie that could thrust the South African industry and a home-grown character into the global spotlight. There’s no one more deserving than the comedy “doctor”, Riaad Moosa. A humble, gentle man, Moosa believes laughter can heal a fractured nation and open doors to intercultural understanding. Enter “Material”, the movie. By MANDY DE WAAL.

The vibrant coloured rolls of woven fabric that occasionally edge out of textile shops studded across Fordsburg, the difference a sleeper movie could make to the South African film sector.

Inspired by Muslim stand-up comedian Riaad Moosa, “Material” sparked the imagination of Ronnie Apteker and tells the story of a Fordsburg family who own a fabric store based in the Oriental Plaza. A fiction loosely based on the story of Moosa’s life, the film is about expectation, tradition and destiny. It is about a young man’s dream of becoming a stand-up comic flying in the face of everything his father wants for his son.

“I think it was Riaad’s second year of stand-up. He started when he was 22,” says Apteker. If you have ever seen Moosa perform, you’ll know why Apteker was so taken by the young comedian. In a world where laughs often depend on crossing boundaries and shock value, Moosa slays audiences with a laid-back approach that often includes exploring misconceptions about Muslim stereotypes. Or as Moosa would put it: “A Muslim with a plane ticket is like a South African politician with a travel voucher – a bit suspicious.”

In real life Moosa gave up medicine to become a comedian in a world where it was not even permissible to go into a bar, never mind get people to laugh at Muslim jokes. “In the story the father is very proud, principled and has this shop, but wants to leave it to his son. The son, of course, wants to be a stand-up comedian, which becomes the irreconcilable aspect of the drama,” says Apteker. In the movie Moosa plays Cassim Kaif who abandon’s the family hopes for him to inherit his father’s material shop for a life of laughs on stage. “On set, Riaad blew people away on a level no one can comprehend. None of the people making this movie could believe what a gift was sent our way. We were blessed. Riaad is incredibly down to earth and almost humble, and this is almost unheard of in the world of art and film.”

This isn’t Apteker’s first foray into films. The legacy of his first flick called “Purpose” made in Hollywood, left him bereft and bedridden. Not one to take defeat lying down, Apteker’s love affair with films continued and he made a couple more movies before graduating to “Jerusalema” which, although not a box-office success, achieved some critical acclaim.

If you know Apteker you’ll know he’s always saying he’ll never make another movie again, but there’s something different about “Material”. “I have been through the movie-making process many times, but it is painful when things don’t come together. I have had some amazing victories, but in past years I have also had some severe hidings. Making movies is a particularly difficult thing to do,” says Apteker.

Being on set or watching the stills posted on Facebook there’s a strong sense this could be our “Bend It Like Beckham”, a gentle, heart-warming film that breaks down cultural boundaries and gets the world to sit up and take notice of Moosa, Fordsburg and the films that can be made in this country.

The local industry needs as much help as it can get because, despite anomalies like “Tsotsi” and “U-Carmen eKhayelitsha”, the stalled sector has never quite taken off. Hollywood does come to South Africa because of the affordable production costs and the growing interest in all things African, but our local productions lag way behind Brazil, New Zealand, India or Australia, despite our industry being older. Without crying wolf there may yet be life in the industry thanks to sleeper films and small, smart screen wonders. Business Day says The National Film and Video Foundation reported that 23 films were produced locally in 2010 and captured 11% of local market share in gross revenue. Not at all shabby considering the South African cinema staple is Hollywood and occasionally Bollywood fair. It’s also a steep increase on the 0,7 % market share reported by the NFVF for 2007.

Then there’s the fact that making sleeper films, never mind blockbusters, is incredibly difficult. You have to be incredibly talented, connected and lucky to make a movie that makes the world sit up and take notice. “I think there are incredible things about this movie and the constellation feels right, but every time Ronnie gets too excited about it I say: ‘Let’s just take it one step at a time.’ These things have a weird sort of alchemy,” says Craig Freimond, who originated the script and directed the film.

“There is this sense of magic that you feel when you shoot and yes it can feel good, but you never know until you put it all together,” says Freimond, who wrapped up shooting on location in Melville and Fordsburg a couple of weeks ago.

“One of the reasons I was excited about the story was because the milieu is a character, so Fordsburg has a very particular character which does feel to me will be very rich on screen. Besides the schism between father and son, there’s the divide between tradition and what the character is trying to do as a stand up comedian. All these different worlds collide amid beautiful images of Johannesburg and Fordsburg which illustrate the contradiction of trying to live a traditional life in a very cosmopolitan city.

“We have had so much help from the people of Fordsburg and from the Muslim community who have gently guided us on a number of aspects of the film that relate to faith. We were looking for a mosque to shoot in and Joey (Rasdien), who also stars in the film, took us to his mosque and the imam let us in. It felt a bit like going beyond the veil because when we first started with the project we tried to meet people to help us and it wasn’t that easy because the people are quite shy and very private. But they have so much respect for Riaad. As soon as you mention his name doors open.”

Besides Moosa and Rasdien, “Material the Movie” stars Vincent Ebrahim of “The Kumars at No. 42”, Nic Rabinowitz, Denise Newman and the legendary Mel Miller. It is currently in post-production and is set to launch toward the end of the year.

“Our country is starving for role models. We are starving for a good-news story to celebrate. I am hoping our timing is good and that luck will be on our side,” says Apteker. He’s not the only one. Perhaps the stars are aligned for “Material” to become a local hit, if not an offshore sleeper sensation. DM