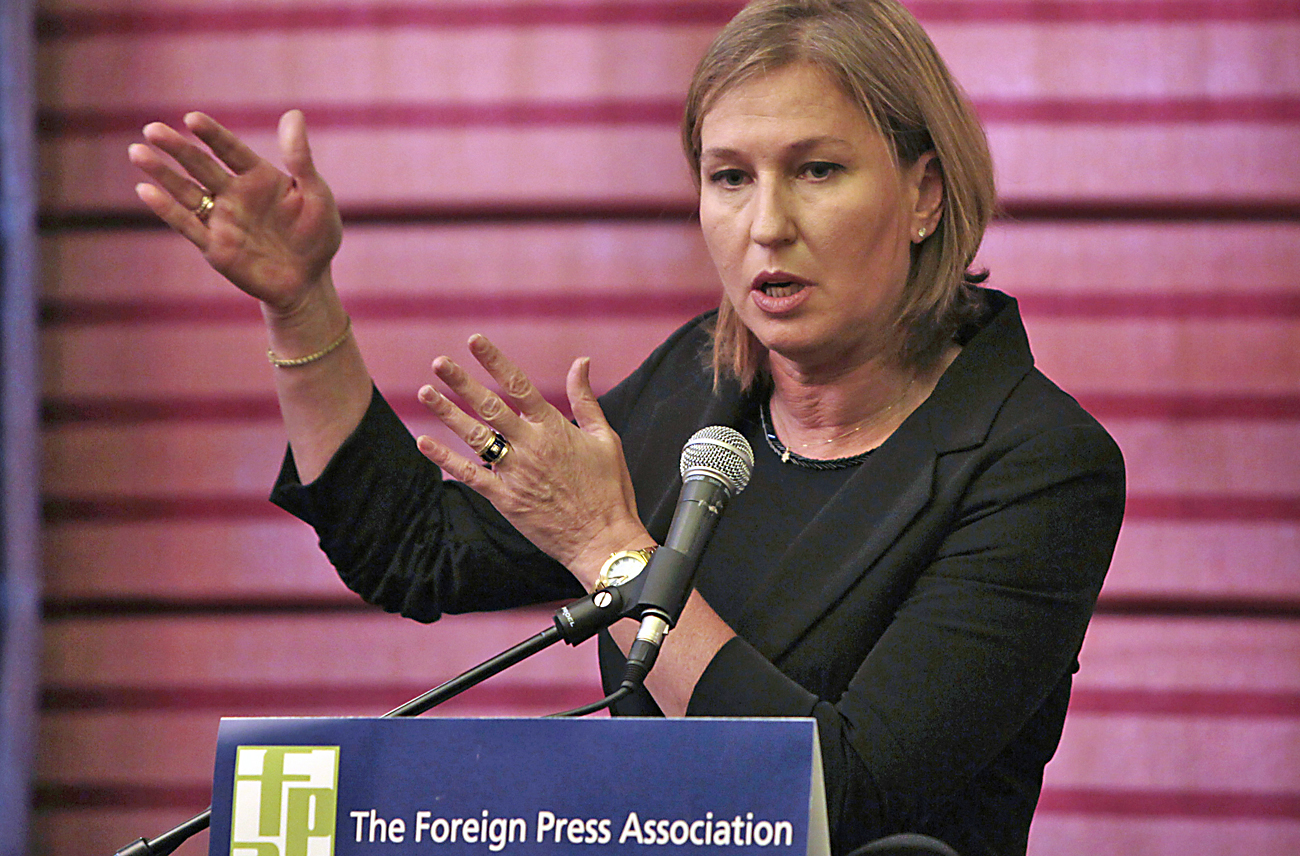 Tzipi Livni occupies a strange position in Israeli politics. As the woman whose party won the most seats in the country's Knesset she should be answering to the title of "Madam Prime Minister". But owing to the strange electoral maths of a country dominated by the issues of security and its very existence, she has to settle for less. So while Benjamin Netanyahu struts the world stage, she takes care of domestic issues. By STEPHEN GROOTES.

Bodyguards can give you strange insights into politicians – how important they see themselves, as opposed to how important their electorates see them. Arriving at the Knesset one expects to be searched. There’s a queue, but it’s not as paranoid as your average Youth League gathering. As we were about to cross the main road in front of the building, a small convoy came racing through. It was short, and not particularly loud. If we hadn’t been told that it was Netanyahu himself, we wouldn’t have believed it.

Tzipi Livni’s office has a similar disregard for ostentation. It’s small. Smaller than just about any office in the Union Buildings. Sure, it is in the corner, but there’s no sofa, just a desk, a notice board and a small meeting table. And a young guard, in a short sleeved shirt with the standard issue earpiece and attitude. Our meeting lasted about 40 minutes. He stood in a spare corner of the room, arms folded for the entire time. You had to keep checking he was still there.

But you wouldn’t really want to look at him, because your attention would be focused on the woman herself. She is one of those people who comes out of her office to greet you, even if you are just part of one of those boring troupes of journalists who pass through on a daily basis. Brusque and businesslike, there’s the ushering to the meeting table, around which eight people can just fit. And then she talks. That she can do. About her country, about why it matters, about security, about history. The usual stuff in Israel, then.

She’s one of those people who you will look at twice, a hint of Sweden in her features, tall, robust, not slight, but would draw the eye of anyone who saw her in a Hyde Park coffee shop. If we may be so bold, she is almost the complete opposite of the woman she wants to emulate, Golda Meir.

What’s striking is about how little she gives you about herself or her party. Kadima, that strange beast formed by Ariel Sharon, a hardliner who wanted to give up Gaza, but couldn’t take his own party with him, “won” the last election. But there’s a big divide between hawks and doves in Israel, and the doves as a whole couldn’t get enough votes to stitch together a coalition. So into the gap blasted Netanyahu. Halfway through a relatively brief meeting with Livni, you may ask yourself if she is perhaps missing the passion, or even the confidence the cigar-smoking Netanyahu has in abundance. There’s almost a reticence about her, that is not too common in Israel.

In most democracies, if you ask the leader of the opposition what they would have done differently in a big speech compared to what the prime minister has just said, you prepare for a longish reply. For Livni, there’s virtually no answer at all. Last week Netanyahu gave an important speech to the US Congress, and she did not respond. No interview, no statement, no soundbite-heavy comment. Why? At first blush, perhaps, her position is a strange conundrum. In Israeli politics your view on security is everything. It’s like race on steroids in South Africa. Nothing else matters. And if you are the main opposition party and you agree with the prime minister on this issue, well, then you are stuffed, well and truly. So perhaps you just shut the hell up and wait for the moment to pass. Besides, you wouldn’t want to come across as disloyal to the cause at a moment like this.

On personal issues, she is more forthcoming. In January she was invited to South Africa in a move that was always going to create a bit of a stir. Two Muslim groups objected, and asked the National Prosecuting Authority to arrest her on arrival. She was foreign affairs minister during the conflict in Gaza and thus, they claimed, could be responsible for war crimes. Our government, rather scandalously, but not entirely surprisingly, took a week to make a decision. Bear in mind that no matter what the crimes of Israel may have been, South Africa has hosted a range of leaders who must surely be guilty of crimes equal or greater than the magnitude of what she may be responsible for theoretically. Our government has not even thought of acting against them. Hell, in just the last month we’ve hosted the head of Iran’s “Human Rights Commission”, an oxymoron. Apparently the reason they’ve executed so many people by the way, is the fault of drugs traffickers, not the authorities. When asked about this incident, Livni immediately remembers the swift sidestep she used at the time. Apparently she couldn’t get the right travel documents due to a “strike” at the foreign ministry. Ja right, and Julius Malema lives as his supporters do.

But she doesn’t hang about in turning the whole thing to her advantage. “I would happily go there and get arrested for what I believe in,” she says, “My parents were (arrested) by the British before Israel even existed.” Of course, that wouldn’t hurt her in the polls now, would it?

So what then does she think of the chances for peace? Again, she doesn’t give much away. Is peace with the Palestinians possible? Yes, “I’ve sat opposite them yes…but trust, trust is missing.” There’s another point she makes quite forcibly, “a religious conflict is unsolvable”. That’s probably true. And her views on the issue, “It’s complicated, newspaper headlines are what; eight words long? You radio people when you speak on radio it’s worse, and this is complicated, I can’t explain it quickly.” There’s almost a weariness about her when it comes to this. But she seems unwilling to give up any more details.

All professional politicians have to be professionally charming. Some are better than others. Livni is very good at it. She draws you into her story, and yet doesn’t appear to dominate the room. In a parliament where fist fights break out from time to time, she must be almost an aberration. Perhaps that’s the secret, the quiet appeal to reason. Either way, she is certainly the complete opposite to the arrogant confident men who have dominated Israeli politics recently. Which may be why she did win more votes than any other in the last election. DM