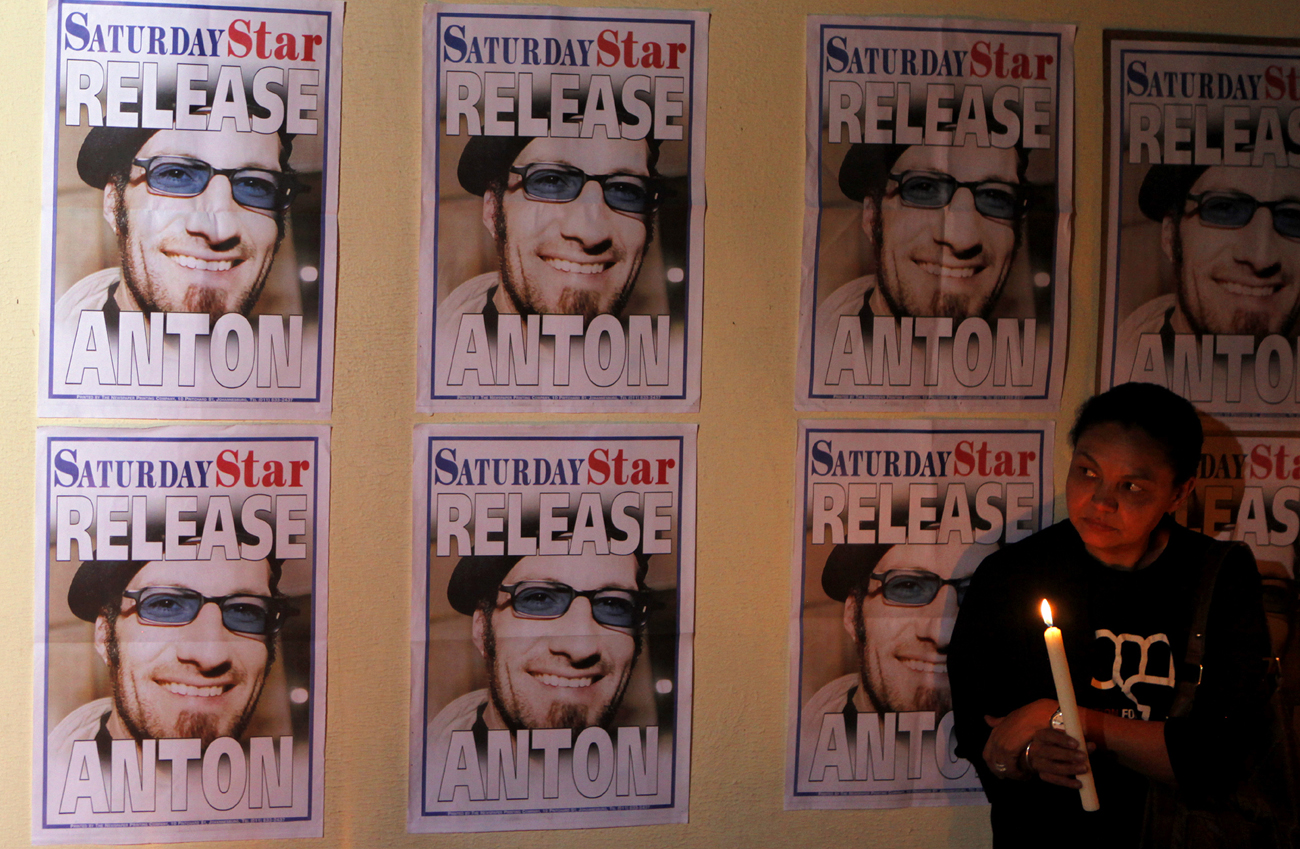 On Tuesday evening it was announced that four journalists held in Libya – Manu Brabo, Jim Foley, Clare Gillis, and an unnamed fourth – would be released, possibly as early as Wednesday. We don't know if the fourth journalist is Anton Hammerl, but it seems unlikely. And in South Africa, the lack of information and action is still difficult to believe. Either the SA government doesn't know or doesn't really care. Or both. By THERESA MALLINSON.

Photojournalist Anton Hammerl has been missing in Libya since 5 April. Since then, our government has strung Hammerl’s family, friends, supporters and the public along with third-party assurances of his safety. Last week, minister of international relations Maite Nkoana-Mashabane appeared confident that Hammerl was still alive. When The Star newspaper asked her whether the South African government had proof of this, she answered, simply, “Yes”. But, in light of the progress that had already been made on the case of the three other journalists, it sat uneasily that this “proof” had not been made known to Hammerl’s family. As his wife, Penny Sukhraj said: “For us to know this for sure we need proof, not only the word of the people holding him captive, but concrete proof in the form of a phone call or consular access. Where is that proof?”

Tuesday morning brought bitter-sweet news as it was reported by AP that four journalists being detained would have a hearing and likely be released soon. Manu Brabo, Clare Gillis, and Jim Foley were all listed, but the fourth journalist was not named. At the same time, Libyan government spokesman Moussa Ibrahim told AP that Hammerl had “not been found”.

“This latest news from the Libyan government is devastating – all this time they have provided third-party reassurances to the South African government that Anton is well,” said Sukhraj. “This a real about-turn for them now suddenly to say he is not with them. We urgently need news of what has become of Anton, following his capture. We’re powerless to do anything about this and are relying on our government to intervene in this situation and do everything possible to save its citizen.”

On Tuesday afternoon, department of international relations spokesman Clayson Monyela again outlined the government’s three-point plan in the increasingly desperate situation. “The people who are in Tripoli are trying to: Firstly ascertain Anton’s whereabouts; secondly get access to him; and thirdly secure his release,” he said. That they’ve been trying for that 40 days now, without it any results, shows a dismal failure on their part.

When asked why the minister had previously stated the government had proof of Hammerl’s safety, when Ibrahim claimed even the Libyan government did not know where he was, Monyela said: “We are doing all of these things on the assumption that he is alive, that is what the minister is saying.” Dirco had better get its story straight, because assumptions are very different from proof. And implying that our officials are privy to more information than they are is simply stupid. Not only does this hamper the search for Hammerl, but displays a callous lack of concern for his family’s feelings.

To give the government some small credit, South African ambassador to Libya Mohamed Dangor returned there on Monday, after being evacuated in February. “In addition to sending people there, we’ve now sent the ambassador back to Tripoli. Because he’s been in that country for a number of years, he obviously has strong contacts with the government of Libya,” said Monyela.

But, unfortunately, it seems to be one step forward and two steps back in terms of the government’s commitment to the now high-profile Hammerl’s case. While Dangor has been dispatched to Tripoli, the minister herself was too busy to meet with the South African National Editors Forum on Tuesday morning, as scheduled. Yusuf Abramjee, head of news and current affairs at Primedia Broadcasting, who was instrumental in setting up the meeting, said: “[The postponement] was something of a shock, because we were looking forward to the meeting at 10:00. Obviously we are disappointed. There is obviously extreme concern regarding Anton’s whereabouts.”

Monyela stressed that the meeting had been postponed, rather than cancelled, and explained that this was due to the minister’s “election commitments”. He was eager to emphasise the government’s dedication to the Hammerl case. “This thing with the editors; it’s not like they requested the meeting. We thought it was a good idea do[sic] this meeting,” he told the Daily Maverick. But Abramjee said this simply wasn’t true. “That’s not true. I personally requested a meeting with him (Monyela) last Friday, and I personally contacted him,” he stated. “To say that they came with the request of the meeting is absolute rubbish.”

There is already enough misinformation regarding Hammerl’s situation, without government representatives further confusing the issue by claiming credit when it isn’t due. It only lends credence to the impression that the South African government simply does not care about Hammerl’s fate; that its lacklustre efforts to find him are only an attempt – and a poor one at that – to deflect criticism, rather than any genuine concern for the safety one of its citizens.

Late on Tuesday evening it was confirmed, again by AP quoting Ibrahim, that Brabo, Foley, Gillis and an unnamed fourth journalist had appeared in court, and would be freed soon. “They should go home today or tomorrow (Wednesday) at the latest,” Ibrahim said. It remains completely baffling, at least to us, why the fourth journalist remains nameless. But Sukhraj said that she had not heard any information about her  husband being released. If Hammerl is indeed the fourth journalist, she believes she would’ve been told.

When Brabo spoke to his parents last week, he indicated he was being held in a safe house with two American and one British journalist. It seems possible the British journalist he mentioned would be released with the other three. It is exceedingly strange that there is no information available about this journalist’s identity beyond nationality; and whether the “British Journalist” is in fact South African Anton Hammerl is anyone’s guess – our government certainly has no idea.

“We are all really worried, now more than ever before,” said Abramjee. “We want the intervention of the South African government; it’s been continuing for far too long now.” We couldn’t agree more.

UPDATE: On Wednesday morning Libyan government spokesperson Moussa Ibrahim told AFP that Anton Hammerl was the fourth journalist who would be released. Since this is the same official who 24 hours ago said the Libyans were unable to find Hammerl at all, his friends and family say they will believe the latest news only when they receive concrete proof, such as a phone call.

CORRECTION: The Sapa article that stated Ibrahim said Hammerl was the fourth journalist has since been updated to reflect that Ibrahim referred only to a South African journalist, without naming him. However, the original AP report does not quote Ibrahim on the nationality of the fourth journalist.

Meanwhile, although Dirco had stated that Nkoana-Mashsabane was unable to meet with Sanef about Hammerl’s case on Tuesday morning owing to “election commitments”, the minister still found time to accept “the highest public award” from the Russian Federation of Veterans in Pretoria. She was honoured with the award, among other reasons, for her “long and fruitful struggle on [sic] creation of real freedom and equality in the Republic of South Africa”, according to a Dirco press release.

UPDATE: Libyan government spokesperson Moussa Ibrahim confirmed on Wednesday afternoon that four journalists would be released soon, after having received one-year suspended jail sentences for entering the country illegally. The names he listed were America’s Jim Foley, Spain’s Manu Brabo, Tunisia’s Lutfi Ben-Qasim, and Britain’s Nigel Chandler. This list differed from the one he gave on Tuesday, which included neither Ben-Qasim, nor Chandler, but did mention Clare Gillis. Hammerl’s name was not included on either day’s list of journalists to be freed.

Photo: A woman with a lit candle stands near posters of South African freelance photographer Anton Hammerl as journalists, friends and family gather in Johannesburg on World Media Freedom Day May 3, 2011. REUTERS/Siphiwe Sibeko.