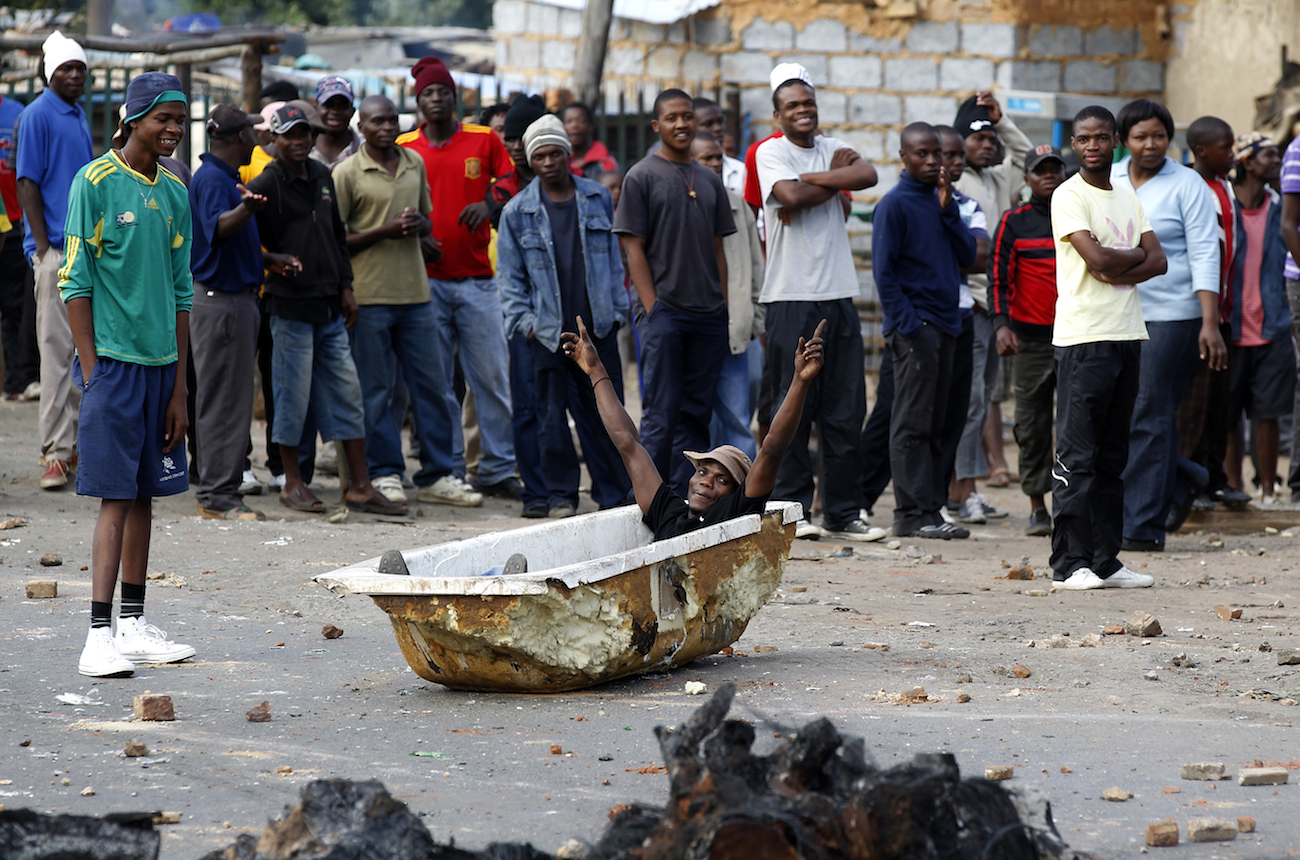 At the Daily Maverick we try to keep a certain level of decorum. Pop into our office sometime and check. It may be trestle tables, but they’re classy. We may not eat with silverware, but we try to keep it clean. So we apologise in advance for the rest of this piece. So, if you object to reading about toilets, lavatories or holy thrones, please stop reading now. But if you are interested in matters scatologically political, then please, dive right in. By, who else, STEPHEN GROOTES.

This election is supposed to be about local government issues, the provision of basic services, lights, water, that kind of thing. No one really expected it to be about the most basic of all services, making sure there are proper toilets to flush. But this is what’s happened, and perhaps it’s a measure of how our politics tends to plumb the depths. But there we are. What started as the ANC finally finding something to bash the DA over the head with on the subject of service delivery has now ended being thrown up all over them. In a wonderfully splattery manner. It’s what you would call a political U-bend.

There is a certain amount of hubris to all of this. Jackson Mthembu and company crowed so happily when the DA foolishly allowed the Makhaza toilet saga to drag on. While they had a legal defence (that the City of Cape Town had done a deal with residents where the city would provide the cisterns and the residents the walls) they simply didn’t have a political defence. How Luthuli House must have loved the entire movement! It simply went on and on, with the DA being overly legalistic and ending up being told, by a judge no less, to do the right thing.

And then came Viljoenskroon. The Moqhaka municipality produced one hell of a parcel for the ANC. First, the claims in the ANC’s favourite newspaper, the Sunday Times, with pictorial evidence, of toilets out in the open and then, unbelievably, the news that the mayor, Mantebu Mokgosi (still in office though not for long) was actually a part-owner of the company that constructed them. How do you sum up her future career in just one word? How about “Ker-FLUSH”.

Breaking the news to Cosatu general-secretary Zwelinzima Vavi on Thursday morning was a moving experience in itself. He was apoplectic with anger, he actually needed a minute to think (he usually thinks more quickly than most). His soundbite was pure Vavi, “I’m shocked, I’m….I’m embarrassed, but I’m not surprised.” And yes, he did call for the mayor to be fired. Immediately. And taken off the candidate list. Now, not tomorrow.

The ANC now has a steaming pile to handle. Because despite the denials and the frantic “Oh my God, but we didn’t know” from Luthuli House, it’s pretty clear they really did know. And did nothing. Mokgosi says she did tell the Free State ANC her husband’s company (of which she is a director) had been the contractor. So there’s a trail of brown stuff for someone to follow up. ANC spokesman Jackson Mthembu was adamant on Thursday, “Luthuli House, we didn’t know, really, why would we say that we didn’t know if we did know”. Gee Jackson, have a little private time in a small room with a lot of white china around and think about it for a while. It should take about eight minutes for you to produce something. Without giving away too much about our habits, we came up with an answer in a second. Our mature grown-up response would involve pointing our finger and singing a song with the words “your pants are on fire”.

It simply won’t wash. No matter which room you use to meditate over it. The fact is the ANC saw an opportunity, went for it and didn’t stop to think. Of course, in all the municipalities it controls (and there are more than 200 of them) there must have been the smell of something somewhere. It was always going to happen. Did they stop to look at their own outhouse? No. And now they’re paying the price.

But what does the ANC’s reaction tell us? Well, for a start, we know more and more that there is an instinctive “react first, think about it later” around during election time. To be fair, it’s not alone, it’s a disease that is infectious, and everyone succumbs at one time or another.

So the ANC now has to spend time meditating, exercising its grey matter, pondering what to do next. It’s not an easy thing to fix. For a start, in politics hypocrisy is supposed to be a capital offence, one that could land you in a place where you share the facilities with strangers. That’s not likely to worry the party for the moment. But it does need to do something. Apart from using this ridiculous pamphlet saga as a distraction (There’s another use for election material printed on paper? – Ed). However, it’ll probably rely on the old tried and tested routine. If at first you push and don’t succeed, push harder. The rhetoric that is. Mthembu et al will merely repeat the refrain, again and again, that the ANC “doesn’t need to be told what to do by a court. It does it because it’s the right thing to do.” In other words, claim it’s still superior to the DA.

In the end, this election campaign is going to be remembered for being about matters lavatorial and very little else. It seems unlikely that the warm scented breeze of clever campaigning is going to define this pre-election period. It’s a pity, but it was probably to be expected.

However, this does tell us that perhaps the ANC is a little worried. It won’t say so publicly, of course, and no, don’t get too excited, we’re not expecting a huge electoral movement involving the contraction of the ANC’s voting muscle and the release of the DA’s. We are saying though that it’s interesting how, in previous elections, the ANC hasn’t really attacked the DA quite as much as it’s doing now.

It’s something to ponder when you next get eight minutes alone. DM

Editor’s note: Stephen Grootes has been on the campaign trail for some time. He’s been dealing with a lot of … stuff from politicians. We hope he recovers. Feel free to leave a message of support below. Double ply would help, too.

Photo: A township resident gestures as he sits in an old bath tub used as part of a barricade during protests over the lack of housing, electricity and sanitary water supplies in Zandspruit, north of Johannesburg April 26, 2011. Police used rubber bullets to disperse the crowd and 16 people were arrested for public violence, according to local media reports. REUTERS/Siphiwe Sibeko