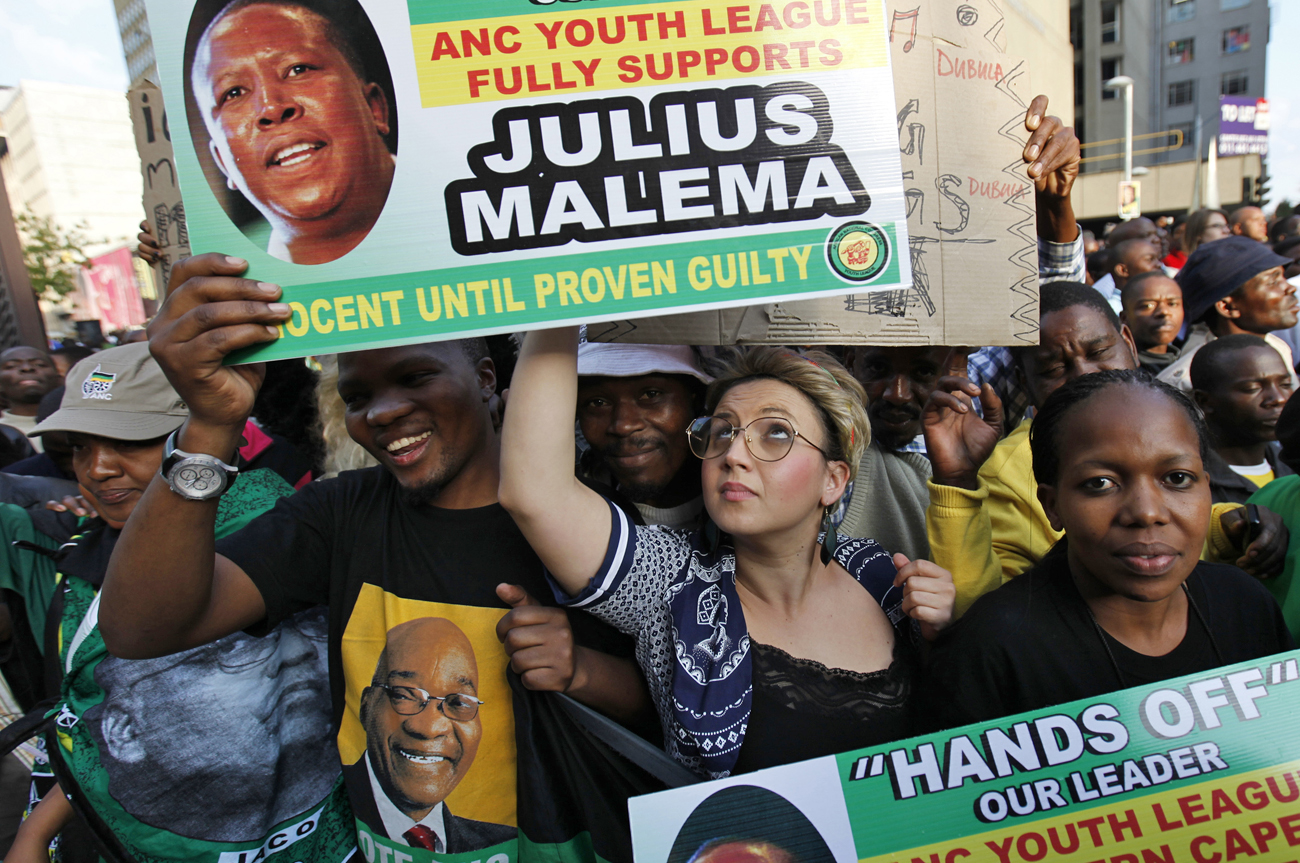 The ANC Youth League has a reputation for being, well, good partiers. It knows how to celebrate after a hard hour’s rallying. Some of its leaders appear to be showing the effects of this lifestyle. Let’s just say the designer shirts are a little tighter than they used to be. So it’s a little surprising the League is taking a hard line on  banning drinking for youngsters under 21  and introducing compulsory, yes, compulsory PT in schools. C’mon Julius, chest out, tummy in. By STEPHEN GROOTES.

That’s right, we’ve read another ANC Youth League discussion document, this time on education and health, that’s been prepared ahead of its national conference in June. Overall, you would think the League would spend most of its brainpower on this particular document. It’s about health and education, issues that affect everyone more than just about anything. Yet it’s only 14 pages long. Compare that to the economic paper, which is a third longer. But that did have to deal with the League’s favourite subject, nationalisation. And not boring things like health and education.

The population structure of any country is always fascinating. The younger the population, the greater potential is for trouble, unless, of course, development is hugely accelerated. Countries tend to follow a population curve, a fact that can allow one to make some predictions. For example when the Labour Party was campaigning in the British 1997 elections, it was careful not to promise to reduce crime, knowing that the number of young men in the population between 18 and 25 was going to rise. So, we should worry when the League tells us 70% of South Africans are younger than 40. And a little more than 12 million of them are at school. Of those, 350,000  are in independent schools, the rest are being educated by government.

But that’s it. No real proposal on schools. There’s a proposal for a national audit on what bursaries are available and some kind of coordinating mechanism to make sure they’re used effectively. Oh, dear. Do you really think private businesses are going to allow government to decide who they give their bursaries to? We can’t see it happening either.

But that’s really where the hard-and-fast thinking about education stops. The League “implores the organisation to desist from regurgitating discussions we have had before” on the education issue. It wants action, and, as usual, it wants it now. Quite frankly, the ANC has passed many resolutions on education issues, and very little has come of it, so we can feel their frustration.

But the League has some firm ideas about how the youth should be treated. It really does want them to be forced to get active. It’s part of an international trend and they might find some companies willing to help them. Go to a public park, and you’ll see a kiddies plastic jungle gym, replete with “Simba” logos. Filthy capitalists realise they could be cast as the bad guys of the obesity epidemic, so they should roll with the punch and help the League get everyone moving.

The Young Lions are also keen on sobriety for a few more years. It fits in nicely with what seems to be a shift within the ANC generally on matters alcoholic. Earlier this year Gauteng Premier Nomvula Mokonyane said she wanted to review the licensing laws in her province. There’s been much attention on how young children are getting drunk. But it doesn’t really matter what the legal age is, like sex, people will do it no matter how old they are, if their social situation is conducive. And, like sex, the ANC and the League should be a little more realistic about it. Currently the age of consent is 16, but you can have a no-questions-asked-abortion at 14. It’s a legal fiction, but it’s also the right thing to do. What we’re saying is upping the age to 21 is one thing, but you’ll never be able to enforce it, so it’s a pretty hollow thing to do.

The second most controversial proposal is for the League to lead a discussion about the possible legalisation of prostitution. The authors sum up the issue very neatly, saying some “argue that because it is human trafficking and stands at odd with the very essence of humanity, it should neither be practiced nor legalised. Whereas others argue that legalisation will help health authorities to deal with and control the spread of sexual transmitted[sic] infections and that a regulated sex industry will provide protection of sex workers”. That’s pretty close to a tweet. But somehow this issue is probably going to be taken away from the League, it’s something their elders and betters will want for themselves. If a real debate on this ever gets going, it’ll be a doozy.

So if that’s not the most controversial part of its discussion paper, then what is? Well, the ANC Youth League wants history to be made compulsory in all schools, and “further calls for the revision of the subject content and support projects aimed at capturing history accurately”. Yip, it wants to rewrite history where it really matters, the schools. Let’s get some things straight here. We could certainly support a call for everyone to study history. But you don’t want kids to hate our past leaders because they have to study their names and dates all the time. That’s exactly what happened with the Transvaal Education Department’s unhealthy fascination with the Great Trek. You also, perhaps, want our children to move on. It’s a difficult argument.

We have no doubt that some text books in current use are not, shall we say, politically correct. The problem, of course, is that our history has a tendency to change pretty quickly, we doubt most teachers could keep up. And yes, we’re well aware of what we’re saying here. But hell, the fires of damnation will be unleashed if we’re going to have a big argument over what should and should not be taught in our history classes. It’ll make the fight over Julius Malema’s songs a picnic. The Youth League knows this very well. And somehow we can’t see them suffering from another nationwide eruption of anger. DM

Photo: Supporters of African National Congress Youth League President Julius Malema hold placards during his appearance for a hate speech trial at the Johannesburg court April 20, 2011. Malema is being charged for singing an old anti-apartheid song, “Kill the Boer”. AfriForum, a civil rights initiative, is claiming that the song is polarizing and dividing South Africa along racial lines and contributes to the continuing killing of white farmers by mainly black assailants. REUTERS/Siphiwe Sibeko