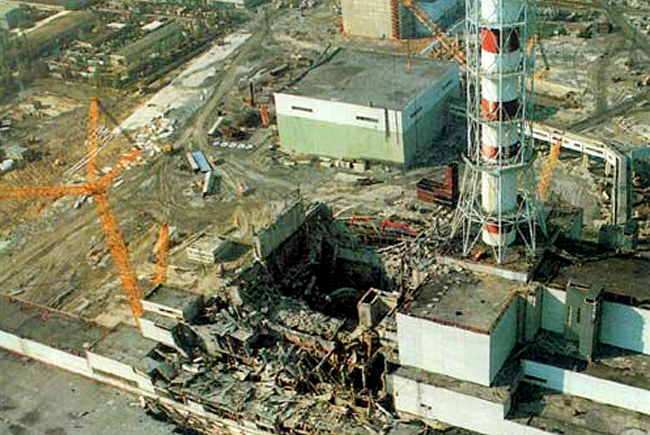 As the world hunkers down under the continued threat of a meltdown at Japan’s damaged Fukushima nuclear plant, the result of the devastating earthquake and tsunami that ripped through that country a month ago, a chilling anniversary is being commemorated elsewhere. Twenty-five years ago, Reactor 4 at the Chernobyl nuclear power plant in the Ukraine, exploded, sending a cloud of poison into the atmosphere. A quarter of a century later the legacy of that disaster is still being assessed. By RICHARD POPLAK.

Of all the ghastly stories that emerged slowly like seeping radioactive sludge from the Chernobyl disaster, none is more disquieting than that of the Bridge of Death. In the nearby town of Pripyat, fastidiously built by the Soviets in 1970 to house the plant workers and their families, the nightmare came in steady waves. It was a warm April, signs hung on the streets for the coming May Day celebrations, and folks who had been cooped up for a long winter were pushing kids in prams and frolicking in the river. Pripyat, a well-off place by local standards, had recently been presented with a Ferris wheel for its small fun fair. Pripyat was eagerly awaiting the first ride.

When Reactor 4 blew up, hundreds of people stood on a railroad bridge crossing the Pripyat River and watched the glow of the fire. They were drenched in lethal levels of radiation – hence, the Bridge of Death.

There were no warnings to stay indoors, no orders to wash the fallout from hair or clothing. It took a full two days to round up the 1,100 buses needed to evacuate the town’s 45,000 or so residents—a delay that amounted to a death sentence for many. As the disaster widened, the chance of a positive outcome for Pripyat and its people narrowed to zero. Hundreds died, thousands became sick, and 25 years to the day after the disaster, it is coded into their chromosomes, written into their genes. Pripyat is utterly deserted. A macabre tourist site, where for 100 or so euro, you get to stroll about an empty town and learn the meaning of the term “fallout”.

Pripyat enjoys one specific benefit over the rest of the affected areas: Its fate is clear. The Chernobyl explosion, still the world’s worst nuclear accident 25 years on, exemplifies the unknowable legacy of such a calamity. Here’s what we do know: On 26 April 1986, at 13:23, a SCRAM, or emergency shutdown, was ordered in Reactor 4, which was undergoing a series of experiments. There was a massive power surge, which caused the first of a series of explosions. Radioactive smoke billowed up from the reactor, and prevailing winds sent it north-northwest. It was suddenly the world’s problem.

Years later, 200,000km² of Ukraine, Belarus and Russia were listed as contaminated, and almost 340,000 people relocated. Farming was halted on 785,000ha of land and will continue to suffer indefinitely. Ukraine and Belarus have dropped more than $12 billion each on the disaster so far, expenditures neither country can afford.

When it comes to the explosion’s human tally, there is no definitive set of figures. Thirty-one plant workers and emergency crew were killed in the immediate aftermath of the explosion, and a further 64 were hit by gamma rays so severe that they were practically roasted and died weeks afterwards. The World Health Organisation says 4,000 were killed. Greenpeace insists 200,000 have died as a result of the accident. A Russian publication puts excess deaths at a staggering 985,000. That said, you wouldn’t want to stake your livelihood on any of those numbers.

The cause of the accident, once thought to be gross human error, has now been attributed to the design of the reactor. The Chernobyl explosion was, however, the starkest example of the crumbling of the USSR, its infrastructure in as poor repair as its ideology. Three years later, the communist regime fell. Twenty-five years later, Chernobyl remains mothballed, Reactor 4 contained in a sarcophagus that already desperately needs a makeover.

In the 30km or so exclusion zone, or black zone, surrounding the plant, life has returned to normal, of a sort. Peasants live in the forbidden area, hunting and subsistence farming among the most radioactive soil on earth. Wild boar is shot, the meat served in high-end restaurants in Moscow and Kiev. Those that live there are resigned to their fate. For now, though, the black land gives them what they need to survive. DM