Hammerl’s supporters demand SA government gets its act together 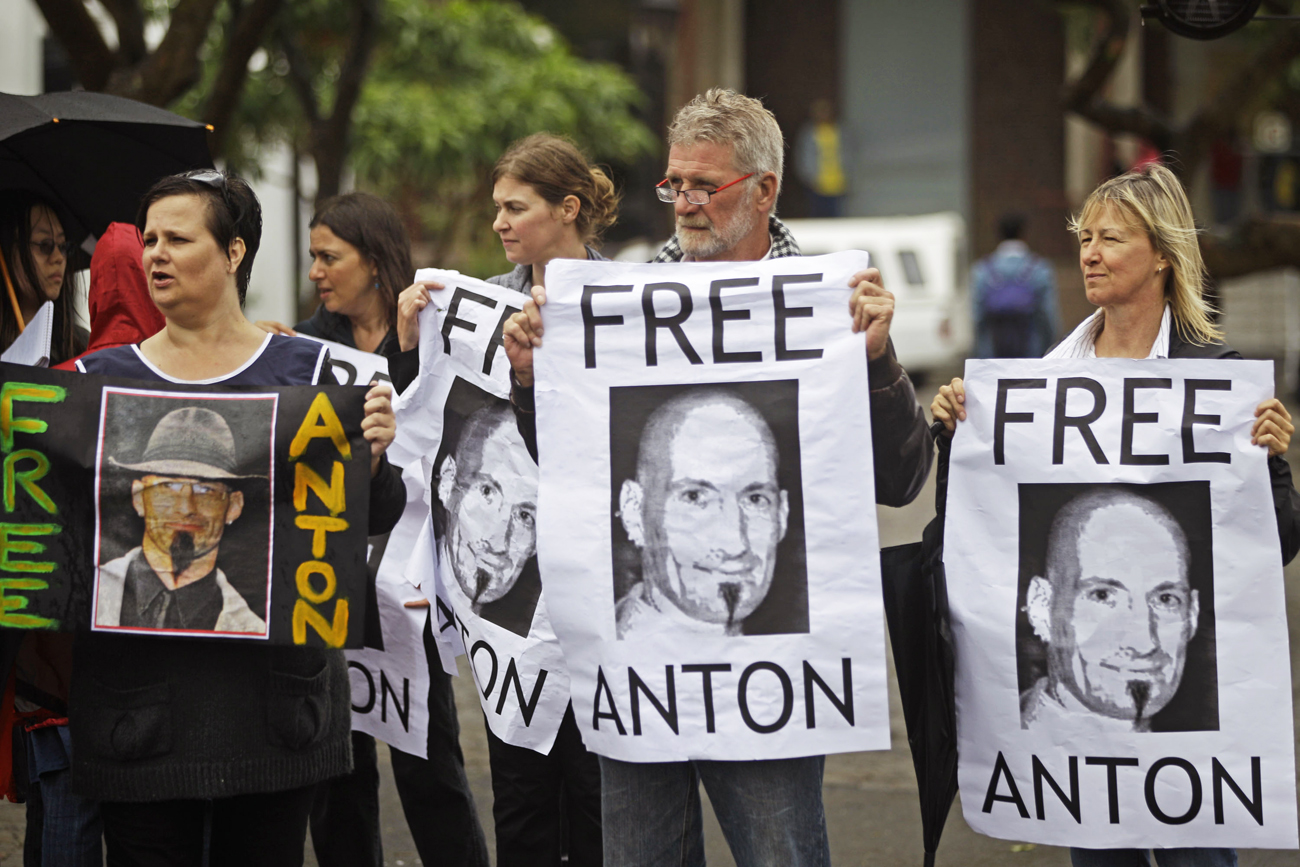 It's now been 16 days since South African photojournalist Anton Hammerl was captured in Libya, along with fellow foreign journalists Jim Foley, Clare Gillis and Manu Brabo – and still there is no definitive information regarding their whereabouts. But while they wait for news, family, friends, and supporters of the captured journalists are doing their best to keep the story alive. By THERESA MALLINSON.

Government officials in both the US and South Africa have been cagey about giving details of progress in negotiating the release of the foursome. That’s assuming there has been any progress, and phrases like “doing everything we can” aren’t particularly reassuring when the world is kept in the dark as to what “everything” entails.

On Tuesday, a group of 15 to 20 journalists and supporters of Hammerl gathered outside Parliament in Cape Town and handed a memorandum to the and cooperation. The memorandum was endorsed by NGOs the Treatment Action Campaign, the Social Justice Coalition, and Media Monitoring Africa, industry group ProJourn and The Daily Maverick and Free African Media.

Journalist Anso Thom, one of the organisers of the event, said that while not many people attended, there was major media coverage. “I probably spent the whole 90 minutes just giving interviews,” she said. “It was pouring with rain, which probably had something to do with why not many people pitched up.” However, Thom said the demonstration had achieved its aim. “What we wanted was to build awareness and that happened. And, of course, we wanted to hand over the memo, which we did.”

One of the more tangible achievements was a statement issued by the presidency in response to the memorandum. While it did not contain any new information, it was the first official statement from the government regarding Hammerl’s imprisonment. “President Zuma instructed the Department of International Relations and Cooperation to use the necessary diplomatic channels to obtain information regarding his whereabouts.”

Spokesman Clayson Monyela emphasised that South African officials had been sent back to the embassy in Libya, after previously being evacuated, for the sole purpose of working towards Hammerl’s release. He said they were on the ground in Tripoli and working to establish Hammerl’s whereabouts, gain consular access to him and to secure his release. Monyela explained government was “also careful about what we put in the public domain, because we don’t want to jeopardise current negotiations.” While Monyela admitted that “so far there hasn’t been a breakthrough”, he was emphatic effort were continuing to secure Hammerl’s release.

Spokeswoman for the presidency, Zizi Kodwa, echoed this line. “On such issues, you don’t make announcements on every step you take. What is important is that we get his release,” he said. In response to a question from The Daily Maverick, whether it was time for other avenues to be explored, for example a personal phone call from Zuma to Muammar Gaddafi, Kodwa said: “It would be irresponsible that we announce decisions, except to say what is in the statement. Our foreign relations is(sic) working 24/7 to locate Anton.”

Penny Sukhraj, Hammerl’s wife, said she was pleased government had been in daily contact with her, as promised. “(They) even report back when there is nothing to report,” she said. “It is frustrating, but, at this stage, we have to give them a chance to do their best, and hopefully there’ll be a breakthrough.”

Alex Hammerl told The Daily Maverick the family felt the South African government was increasing its efforts to release his brother. “We feel a lot more confident that something’s being done,” he said.

Meanwhile, around the world, friends, family and supporters of the other three captured journalists are doing their best to raise awareness and secure their release. Jim Foley’s family was given a fax number for Gaddafi’s sons, and duly sent a fax calling for Foley’s release, but have yet to receive a reply.

Michael Foley, Jim’s brother, said he was particularly concerned about the situation, considering the fact that photojournalists Tim Hetherington and Chris Hondras were killed in Misrata on Wednesday. “It’s hard to describe the emotions my parents and my siblings and I are going through at the moment. The lack of information is the most difficult,” he said. Regarding promises reportedly made by the Libyan government that Foley would be able to call his family within the next couple of days, Michael said it was a “less than full commitment” from the Libyan government. “I think the term ‘semi-commitment’ was used,” he said.

When asked whether he felt the US government was doing enough to secure his brother’s release, Foley said, “It’s a hard one to answer. I understand they’re not providing 100% of the information to me. I have received assurances that everything is being done. (But) until our family receives a call from a senior official, there is doubt in the back of my mind. I haven’t received confirmation from the top.”

Thomas Durkin, who first met Foley at Marquette University in the early 1990s, described his friend as “an adventurous guy”.  Foley was previously embedded with US forces in Iraq and Afghanistan, and reported from both wars. “Ultimately, this led him to Libya,” said Durkin. “Jim’s goal has always been to find an objective truth in whatever he covered.”

Eliabeth Mellyn, a close friend of Gillis, described her as equally adventurous. “When Egypt started to go, she made a decision, and said: ‘I’m going to Egypt.’ She spent a good part of the Egyptian Revolution in Tahrir Square at the heart of the action. I’m not sure that she wanted to be a war correspondent, so much as an essayist, probably along the lines of someone like George Orwell.

“What ended up happening, was there was a huge flight of journalists from North Africa. So she started a blog. She started writing for USA Today and the Atlantic, the Boston Globe and other papers… She’s a person who asks hard questions and she’s a problem solver. This really set her on fire in a way I’d never seen before.”

Regarding the US government’s efforts to secure Gillis and Foley’s release, Mellyn said: “I appreciated the statement Jay Carney, the press secretary, made at a briefing on 11 April. He called for the immediate release of the detainees, though admitted the US government’s limited ability to act directly. That was measured and reasonable.”

Carney tweeted on Tuesday about the situation, “We are very concerned but can’t go into detail. We’re working hard to assist them in any way we can.” The Tweet caused some consternation among the Facebook groups dedicated to Foley and Gillis’s release, which Mellyn attributes to the pessimistic light in which news agencies reported it. Personally, she said she felt “a little underwhelmed by how Carney is talking about the matter”, but added that she was “encouraged that the administration has not let the matter drop”.

While they wait for news from the official channels, the journalists’ family and friends continue to play their part in creating awareness around the story. “(On Thursday) my parents and I will be on MSNBC with Andrea Mitchell,” said Foley. “I understand Clare’s family, who we’ve been coordinating with, are going to be on NBC’s Today Show tomorrow morning. We continue to work those public angles.”

On Wednesday evening, The Daily Maverick was able to speak briefly to Pablo Fanjul, a childhood friend of Spanish journalist Manu Brabo. Fanjul reported on the demonstration demanding Brabo’s release that took place in Grijon, Spain earlier in the day. “We are quite satisfied, because there were 300 people, more than we were expecting,” he said. “Manu’s family felt really well when they arrived and saw the number of people who were supporting. They were really happy.”

In South Africa, another “Free photographer Anton Hammerl” demonstration will take place in Hyde Park, Johannesburg at noon on Thursday. Alex Hammerl had this message to give to his brother’s supporters: “I’d just like to say thank you all for your commitment, and that Anton has definitely been captured and is being held. It’s just a matter of applying pressure to have him released.” DM