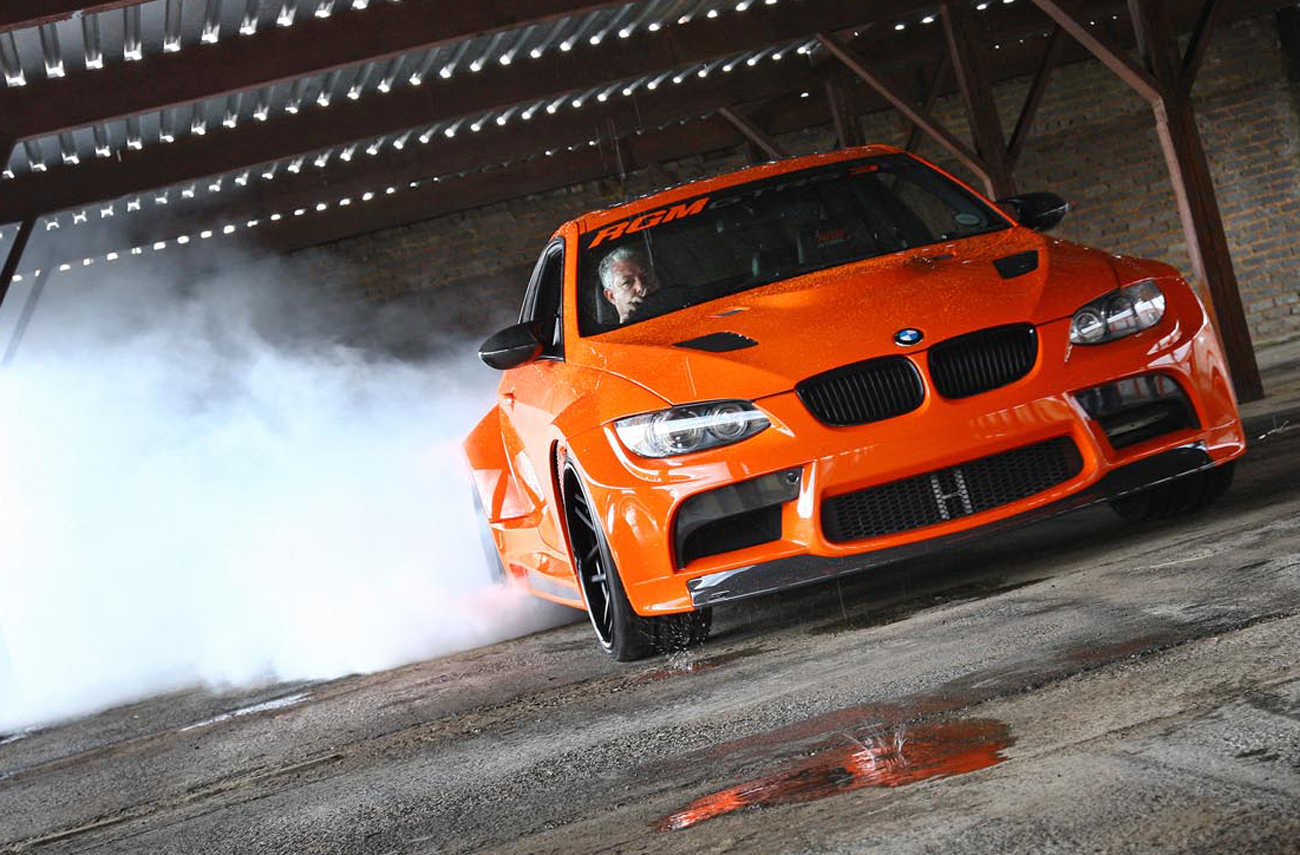 It might have a name almost as long and obscure as a VIN number. But the Orange Monster is also one of the quickest and most powerful variations on the M3 theme we’ve ever encountered.  Is that a grin on my face? You bet! By DEON SCHOEMAN.

I’ve been lucky enough to drive a long list of BMW M3 examples over the years. There was that first, boxy E30-based version, with its resolute, no-nonsense appearance, a dogleg gearbox and a purity of purpose that remains undiluted and challenging to this day.

By comparison, today’s sleek and oh-so-grown-up, latest-generation E92 M3 Coupé is much more sophisticated, and much, much quicker. It can run with – and beat – several supercars in real-world driving conditions, but for all its high-tech appeal, it demands driving talent too.

There have also been some truly wild ones. The superfast and super-expensive M3 GTS, created by BMW M as the ultimate M3, was conceived specifically for unrivalled driving thrills, on and off the track. Pity it costs Porsche money and won’t be sold in South Africa. Even rarer is the Schnitzer-tuned M3 Frozen Edition – a limited-production model unique to SA and featuring one of the loudest exhausts ever to grace a production car. With its matt-black finish, uprated engine, beefed-up suspension – and that exhaust note – the Frozen Edition may well join BMW legends such as the 333i as one of the scarcest and most collectible of its kind.

But none of them comes close to an M3 I’ve already dubbed the Orange Monster. Built by Rob Green and his team at RG Motorsport in Randburg, the Monster is one of the wildest, most outrageous BMW M3s ever created. It transforms what used to be an already extremely rapid car into a brutal speed machine.

The Monster started life as a normal E92 M3 Coupé with a six-speed manual gearbox and a 309kW V8 mill under the bonnet. For most of us, that would be more than good enough. After all, the standard M3 is already a very satisfying performance machine, with a breadth of capability that, as I’ve said, can embarrass a supercar. But Green wanted more. And so, the M3’s transformation began. Initially, all the changes made were under the skin, while leaving the exterior stock standard. But what was going on under the bonnet was quite spectacular.

The internals of the M3’s high-revving four-litre V8 remain essentially unchanged, but a Vortech mechanical supercharger is bolted on, together with some complex ducting and an air-charge cooler located above the ram tubes of the intake system.

The conversion is entirely reversible, and the engine isn’t opened at all. That says as much about the M3 powerplant’s robust nature as it does about Green’s engine conversion skills. To make the most of the changes, the engine management system is adapted using a Unichip piggyback system. The  boost in power is substantial. Green claims a flywheel figure of 504kW at 8,000rpm, together with 634Nm of torque at a peaky 6,000rpm. That easily outshines the standard car’s 309kW and 400Nm. The clutch remains a standard M3 unit, as does the six-speed manual gearbox.

But the engine isn’t the only modification. To meaningfully apply the extra urge, the GTRS 3S is fitted with a KW suspension upgrade that retains the M3’s adjustable electronic dampers, but allows a much wider scope of adjustment in loading and rebound. It also lowers the Monster by 15mm. The most outrageous part of the GTRS 3S, however, is the exterior. I’ve yet to drive anything that attracts so much attention – including the Audi R8, the Nissan GT-R and any number of other sports cars. But then, it’s hard to ignore a bright orange M3 on steroids.

Imported from Germany, where the car-tuning business is almost a national sport, the Vörsteiner GTRS 3 body kit comprises a new carbon-fibre bonnet, a revised front airdam with new splitter, a carbon-fibre boot with larger integrated rear spoiler and a pronounced rear diffuser.

The extra space allows the fitment of equally radical wheels and tyres. The Michelin Pilot Sport 2 rubber measures 285/25 R20 in front, and 325/25 R20 at the rear. The black three-piece V308 aluminium wheels are also by Vörsteiner and add further visual menace. The body kit was fitted and spray-painted by Sabbatini Auto Stylists in Northriding.

Given  all the radical changes to this car, the cabin is almost disappointingly stock. The only notable change is the BMW Performance steering wheel, which integrates a configurable display on the top arc. Data includes lap times and oil and water temps, while shift lights are included too. Settle in behind the wheel, engage the clutch, hit the starter button, and the V8 instantly burbles into life. The exhaust note is louder, but not deafening, and the throttle response is immediate and incisive. The clutch pedal feels meaty, just like a normal M3, and the gear shift action is hefty and positive.

Trundling around the Midvaal racing circuit, it takes a while to get the oil temperatures up, but even at cruising speeds, the stiffer suspension makes the BMW feel planted and purposeful. On trailing throttle, the whoosh of pressure escaping from the supercharger’s waste gate is almost louder than the engine.

Finally, you can give it stick – and nothing can prepare you for the almost violent kick of the M3 GTRS 3S when you floor the loud pedal. It leaps forward like a scalded cat and the acceleration is relentless. You can feel the rear tyres struggling for grip and the first corner looms much quicker than expected.

Midvaal’s main straight is long enough to really get a sense of how quick the Monster M3 is. The speedometer needle has moved well into the 200km/h territory by the time you have to haul out the anchors for the corner, while the altitude-tested zero-to-100 time of 4.17sec feels entirely possible.

Those Brembo brakes provide the necessary stopping power, but to be fair, they have to work hard in track conditions to temper the velocity at the end of the straight to more manageable levels. Other keynote figures include a quarter-mile dash of 12.2 sec, with a terminal speed of 200km/h, and a 1,000m terminal speed of 267km/h. Green believes the car is capable of well over 300km/h, even with the extra drag of the wide body.

With all that power, throttle input becomes an important part of controlling the GTRS 3S. Fortunately, those huge gumball tyres deliver plenty of bite and the chassis set-up gives plenty of warning before the back steps out.

Switch the stability control off, step on the accelerator too quickly and you’ll need a whole armful of lock to counter the oversteer. But even driven with gusto, the orange monster feels composed and inspires confidence. Bolt on a set of slicks and this would become a formidable track weapon.

The total for this RG Motorsport GTRS 3S comes to more than R815,000 – and that’s without taking the initial cost of the car into account.

Yes, the M3 GTRS 3S is over the top in every respect. But you have to admire both its considerable performance potential and the workmanship that made it possible.

This is not a cobbled-together hot rod, but a properly developed and carefully executed performance machine – and while it costs a king’s ransom, the end result warrants the investment.

However, the stratospheric performance comes at a price: It lacks the outright balance, and the finely honed personality, of the standard M3. By comparison, the GTRS 3S is a monster – but what a thrilling one! DM