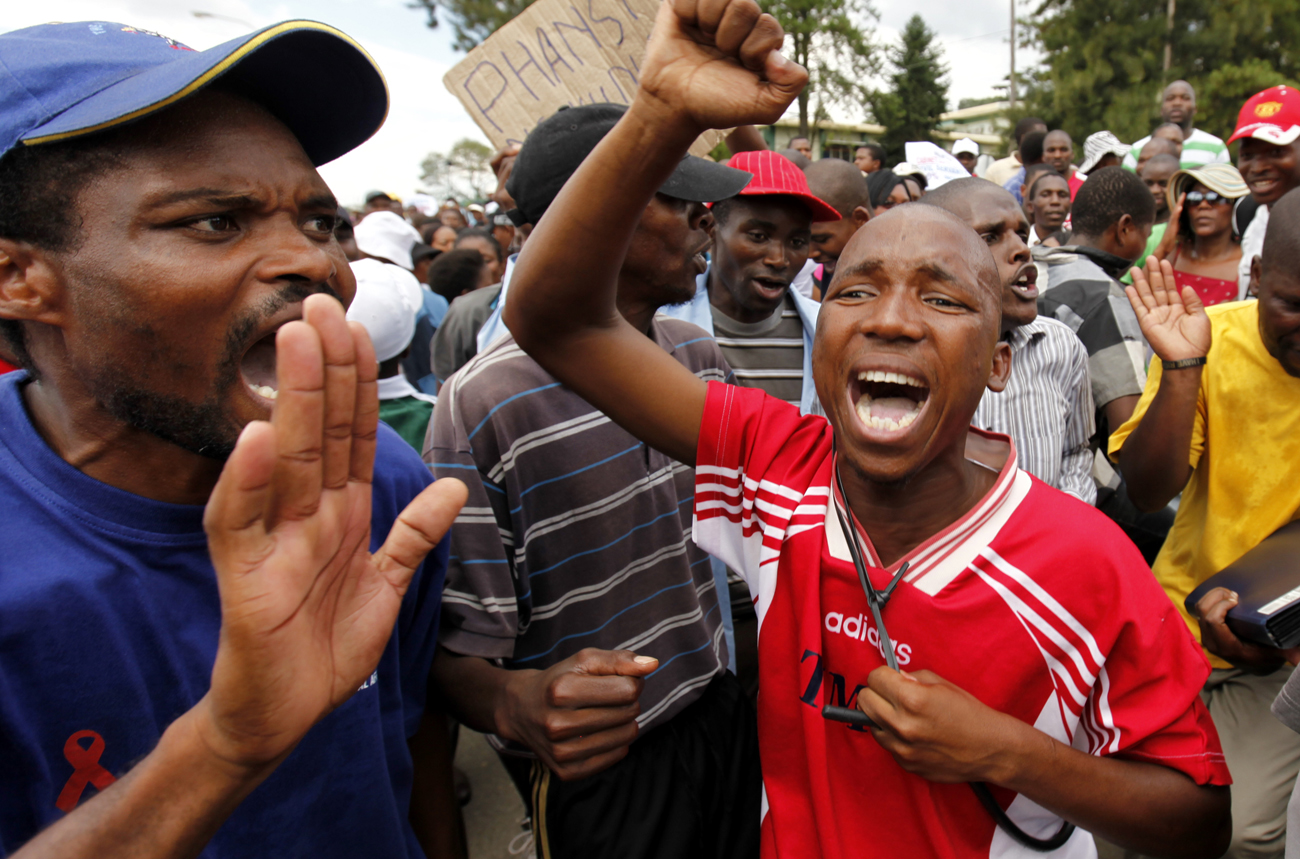 The Daily Maverick's Swazi correspondent, Manqoba Nxumalo, was detained in Manzini at noon on Tuesday, but released shortly after. We'll be updating this story throughout the day with news from Nxumalo, as well as other activists and journalists in Swaziland.

The Swaziland Solidarity Network (SSN) has confirmed that all union leaders who were arrested on Monday and Tuesday have been released. However, the four union members detained on Sunday – Maxwell Dlamini, president of the Swaziland National Union of Students; Simanga Ginindza, deputy secretary of both the Swaziland United Democratic Front (SUDF) and the Swaziland National Union of Students; Sifiso Mabuza, the Swaziland Youth Congress deputy president; and Themba Mabuza – are still in prison. SSN spokesperson Lucky Lukhele told The Daily Maverick that it is now known where the activists are being detained, and lawyers will visit them tomorrow. “The treason laws in Swaziland don’t allow them to be held for more than 48 hours [without charge],” says Lukhele. “So logic dictates that tomorrow they will be charged or released.”

Swaziland Democracy Campaign spokesperson Mary Paia da Silva has also now been released. Da Silva’s interview with Radio 702 was curtailed just after noon on Tuesday, when security police barged into the SUDF headquarters, and began punching and kicking her, before bundling her into a van. She was detained and interrogated for about two-and-a-half hours. “After the interrogation, I was strictly warned to desist from my activism, and the station commander stated that they would do everything possible to find some incriminating evidence so that I can be arrested and imprisoned because I was proving to be a very painful thorn in their behinds,” she stated. “I was also given a ‘friendly’ warning that my safety cannot be guaranteed.

Speaking to the Daily Maverick, Da Silva says that while she is legally able to take action against the police regarding their treatment of her, she does not know if it will be successful because the judiciary is appointed by the king. “Often the outcomes of these cases are predetermined,” she says.

And she is adamant that the beatings and detentions will not deter Swazi activists. “We are very committed to carrying out our programme of action, which we came up with last year. The people on the ground have spoken; they’ve actually asked what is happening tomorrow, because despite security clampdown, they want to protest.

For her own part, Da Silva also will not be cowed. “I’ve gone in for medical attention; they’ve given me the necessary medication,” she says. “I should be up and running tomorrow.”

Manqoba Nxumalo reports that activists and journalists are busy having a post mortem of Tuesday’s protests.”Currently people are regrouping in Manzini Cultural Centre and at the church building,” he told The Daily Maverick. “A lot of people have been abducted, and beaten up, as well as taken by cops and escorted to far-flung areas of the country.”

There are rumours that the prime minister wants to convene a press conference, but this has not been confirmed.

Meanwhile Mail & Guardian journalists Niren Tolsi and Lisa Skinner were questioned twice by police on Tuesday – once in the morning, and once in the afternoon. When they were taken into the Manzini police regional headquarters in the morning, Tolsi’s list of Swazi contacts was copied. In the afternoon, Skinner says that the police were rounding up people wearing red T-shirts indicating that they were union members. The two journalists have subsequently moved hotels, as the police had found out where they were staying.

Manqoba Nxumalo reports that police in Manzini have used teargas and fired rubber bullets to disperse protesters after a protracted standoff. Protesters have scattered, and are currently trying to regroup.

Just after noon, Swaziland Democracy Campaign spokesperson Mary Paia da Silva was updating Radio 702 about the latest situation in Manzini, when her phone call was abruptly cut off. When the producer called Da Silva back, her phone was answered by someone else, who swore at the producer.

On Tuesday morning, the Swazi National Association of Teachers headquarters were blocked off by police, with the intention of preventing more than 500 teachers from joining the protests. Similarly, according to the Swaziland Solidarity Network, police are “camping out” at the University of Swaziland Kwaluseni, preventing students from leaving the campus.

Reports of the numbers of activists detained in Swaziland so far on Tuesday range from 100 to 300. Meanwhile, the whereabouts of the four trade union leaders who were arrested on Sunday are still unknown.

Manqoba Nxumalo was released after being briefly questioned at the Manzini regional police headquarters, apparently because the police did not wish to hold a journalist. Nxumalo told The Daily Maverick that he had not been mistreated by the police, and had seen no abuse of protesters who had been picked up with him, although there had been altercations at the time of the arrests. The arrests were apparently at random.

Daily Maverick correspondent Manqoba Nxumalo has just been arrested, along with 15 trade unionists. No other information is currently available.

I am currently in Manzini, the centre of the April 12 protests. I was with three unionists, who were arrested right in front of me, and taken to the Manzini regional police headquarters. I managed to evade arrest because I had gone to take some footage in an adjacent building.

Right now the town is littered with police officers and armoured personnel are flooding the streets, dispersing people walking in groups of three. I have also been informed that labour leaders Vincent Ncongwane, secretary-general of the Swaziland Federation of Labour (SFL); Muzi Mhlanga, secretary-general of the Swaziland National Association of Teachers; Barnes Dlamini, president of the Swaziland Federation of Trade Unions (SFTU); Sipho Dlamini, the president of the SFL; Mario Masuku, the president of the People’s United Democratic Movement (Pudemo); Cebile Dlamini, Sebe Nxumalo and at least one hundred others have been arrested for assembling in town and talking about the march. They are currently being held at the Manzini regional police headquarters.

Sebe Nxumalo just called me to say that they are being asked about the march and why they are in town. Schools have been closed, and the University of Swaziland is also closed. The university’s Student Representative council deputy president Sibusiso Nhlabatsi, has also been detained. I have been informed by Sibusiso Lushaba, the secretary-general of the Swaziland Democratic Nurses Union, that until their leaders are released they will not go back to work and that they will ensure that they paralyse the economy.

Some people are staying away from Manzini – perhaps in fear of what is likely to erupt. Already, police officers are all over the town trying to control the flow of traffic, mounting roadblocks and ensuring that those who come from other areas are stopped from reaching the town in Manzini. Erick Dlamini, a sugar cane worker from Lubombo and also a member of Pudemo called and told me that they had been stopped at a place called Mbhadlane, a few kilometres from Manzini.The activists stopped at Mbhadlane have decided to organise a rally there, rather than returning home.

For now more than 200 people have been detained in various police stations across the country. While the march has not yet started, more people are flocking into Manzini. DM

Protesters take part in a march in Mbabane, the Swaziland capital, March 18, 2011. Thousands of Swazis marched on the prime minister’s office on Friday in a rare protest to demand the resignation of the tiny southern African kingdom’s government. Swaziland is in the grip of a serious financial crisis and civil servants fear they will not be paid this month after Africa’s last absolute monarchy suffered a huge drop in income from the Southern African Customs Union. REUTERS/Siphiwe Sibeko.