Analysis: Zuma’s impatience with Mugabe signals he is out of good options 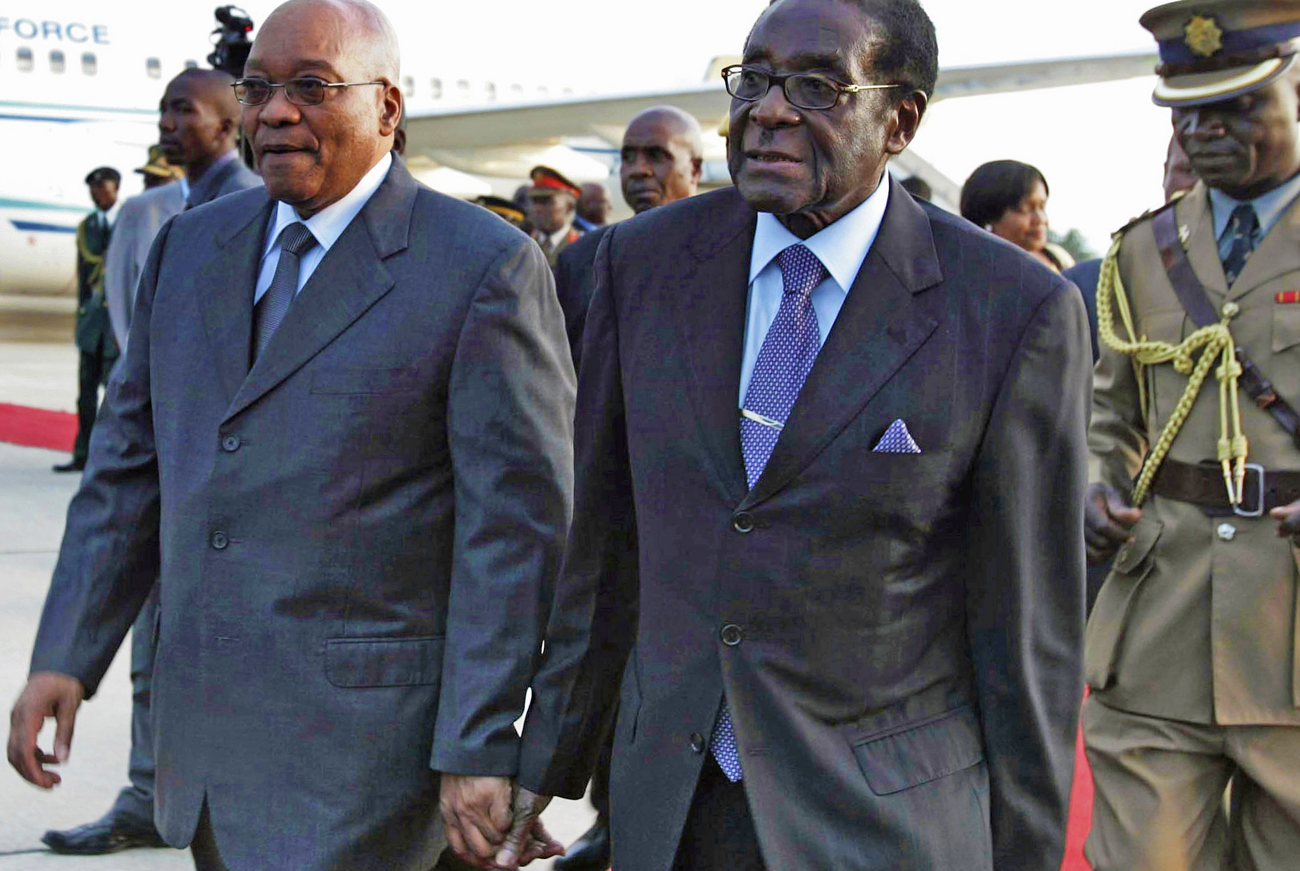 Zimbabwe has been a news story for so long, that we often forget it’s even happening. We all remember the “Global Political Agreement” signed by MDC leader Morgan Tsvangarai and President Robert Mugabe in 2008. It was the highpoint of President Thabo Mbeki’s diplomatic life. Followed a day later by the lowest part of his domestic life, the Nicolson Judgment that led to his recall. Since then, things have been in a sort of holding pattern, with life on the ground getting worse, then slightly better, then worse again. All the while, there’s been no huge change in South Africa’s policy towards Zimbabwe. But why would that all seem to be changing now? By STEPHEN GROOTES.

It’s easy to think everyone in the ANC likes Robert Mugabe and ZANU-PF. Didn’t Zimbabwe give the ANC succour during the Liberation Struggle. Didn’t the Zimbabwe Broadcasting Corporation (back when it actually had a functioning television station) always refer to South Africa as the “Racist Apartheid Pretoria Regime”? And remember picture after picture of Mbeki, then Kgalema Motlanthe, then Zuma himself being met by Mugabe at Harare International Airport, looking a silly with garlands of flowers around their necks, and holding hands. And then there was Mbeki’s insistence on “Quiet Diplomacy”, which always seemed to bear a startling resemblance to doing nothing.

But Zuma has been different. He’s never been on the same page as Mbeki on this, and this is now becoming clear. It’s not that he has been biding his time for the last two years, it’s that he has had very little space to move. He has always had a mandate from the ANC to do what he thinks is best, and if you’re looking for someone to act as a mediator, Zuma is your guy – he is naturally gifted at these things.

The problem is now, as it always has been, Mugabe himself. How do you negotiate with someone who is able to rule by the gun for all these years, and has no compunction about continuing to do so. How do you negotiate with someone is simply the most cunning political mind to emerge out of Southern Africa, who is able to turn any kind of pressure on him into pressure on his opponent. Where do you even start. What Mbeki did, and did well, was to convince Mugabe the best way out of his situation was to hold an election. The cunning part was there were actually people monitoring the election, who could see where the vote rigging was happening. It was about counting votes in polling stations, and putting the result of that polling station on the station’s door, and having someone there to look at that number. That number could then be compared with the number registered at the central counting stations, and thus the MDC stood a fighting chance.

But since then, Mugabe has manufactured crisis after crisis. First it was Roy Bennett, the MDC’s deputy agriculture minister who was arrested on trumped up charges, then a fight over the governor of the Reserve Bank, then one over the Speaker’s office, and then the usual excuse, sanctions. This has always been about Mugabe being able to say to his people, “Look, the MDC are imperialists”. It’s a lesson Julius Malema has learnt well.

From his side, Zuma has tried to remove the excuses Mugabe has. He has always known, perhaps better than most, Mugabe has never had any interest in ruling for the benefit of his country, only for his circle of henchmen. While it’s almost always a mistake to get into matters of “tribalism” to even try understanding political events in Africa, Zuma knows Mugabe has ruled at the expense of nearly half his population. He knows Mugabe is only in it for the bigger group, and the other can go to hell.

There’s something else of which Zuma seems to be keenly aware. It’s that Mugabe is a violent man. So Zuma’s entire policy, the lynchpin of his approach up until now has been about containing that violence. In his view, it’s better to eke out a way to democracy without the army turning its guns on the population. Of course, he’s right. And he knows he has to make sure Mugabe has no excuse to create these crises. This is why he’s spoken out so strongly against sanctions, why he seems to be so close to Mugabe. It’s not an easy job, because he also can’t be seen to be too close, because he doesn’t need Tsvangarai to pull out either. That would be a Zuma nightmare. The other section of this would be for Mugabe to throw everyone out of Zimbabwe altogether, and claim he’s using his legal sovereignty to do so. So out with the World Food Programme, the US embassy staff, representatives of the South African government, the whole bang-shoot. That would be a prelude to some serious banging and shooting in Zimbabwe.

The point here is that people who are celebrating that Zuma “has finally told Bob where to get off” are entirely wrong. If Zuma is really now putting the pressure on Mugabe, it’s because all his other strategies have failed. It’s because the whole general plan of keeping the guns in their holsters until another election hasn’t worked. Mugabe is intent on pulling out of this government of national unity at all costs. He wants to provoke an election as soon as possible, and preferably one where his soldiers can make sure the words “free” and “fair” will have nothing to do with it. He needs to do it before the Tunisian revolution makes it way down South. What happened in North Africa must be frightening him out of his wits. This adds pressure to the situation, it makes him more dangerous than he was before.

If Zuma is really trying to put some serious pressure on Mugabe now, it’s only because he’s run out of ways to stop him turning violent. We should all be very worried indeed. DM