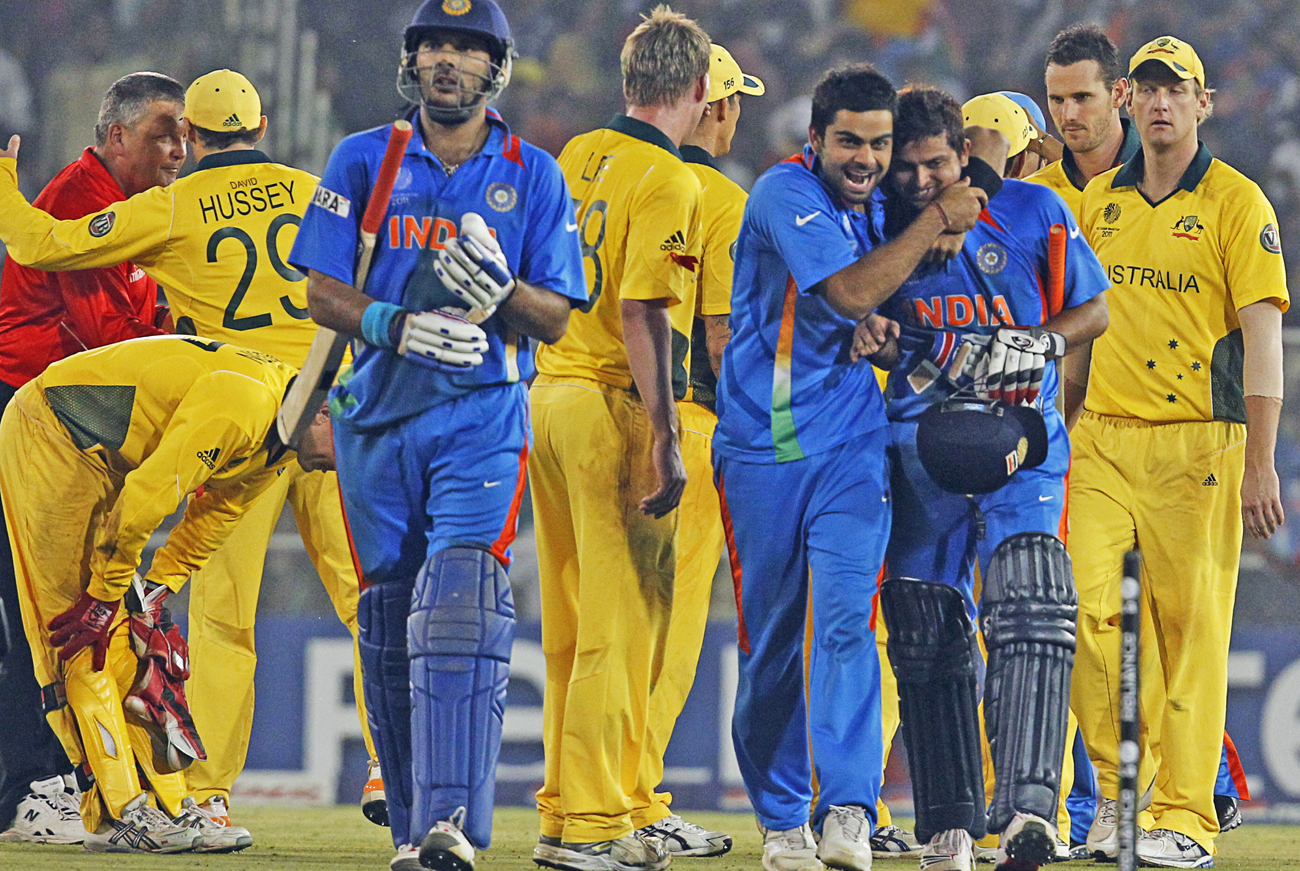 Australia’s dazzling World Cup run, which started in 1999, finally ended as India came from behind to win the second quarter-final. Ricky Ponting scored a hundred in what is probably his last World Cup match, but three Indian batsmen passed 50 – including Yuvraj Singh again – as they reached the target with 14 balls to spare. By SIMON WILLIAMSON.

The powerhouse of world cricket took on the champions of the last three Cricket World Cups in the second quarter final. Ahmedabad played host for this fixture and a banging crowd packed a full house as cricket’s best modern rivalry took stage.
Australia came into this game with problems. Ponting’s form looked like its majority shareholder was a state-owned mining company. Mike Hussey is still making a return from injury and Cameron White – well, I don’t know why he even bothered bringing a bat to the tournament. Australia dropped Steve Smith, their young all-rounder and re-introduced one of their form players of recent times, David Hussey.

India had problems of their own, particularly their bowling which, except for Zaheer Khan and, surprisingly, Yuvraj Singh, hasn’t shown any consistency.

Brad Haddin and Shane Watson opened for Australia who won the toss and decided to bat first. Watson departed early trying to have a hit at Ravi Ashwin (mercifully finally having been picked in the Indian team) and in came skipper Ricky Ponting. Ponting’s tournament has been a horror show and he walked in with the two Indian off-spinners – the kind of bowling he can be susceptible to – bowling in tandem. Indian skipper MS Dhoni proceeded to whip them off shortly afterwards and in what would become a key passage of play, Ponting was allowed to settle into the pedestrian pace of Munaf Patel and the slightly-more-than-part-time spin of Yuvraj Singh. Haddin issued the ball around the ground while Ponting began to remember where the middle of the bat was, and by the time the next wicket fell (Haddin for 53) Ponting had accumulated 29 off 37 balls. Photo: India’s Virat Kohli reacts as he walks off the field after his dismissal by Australia’s David Hussey during their Cricket World Cup 2011 quarter-final match in Ahmedabad March 24, 2011. REUTERS/Andrew Caballero-Reynolds.

As the Australian innings capitulated around him (Michael Clarke 8, Mike Hussey 3, White 12) Ponting passed 50 off his 67th ball and, when joined by David Hussey, decided it was time to up the run rate. Dhoni and his bowlers haemorrhaged the Umpire Decision Referral System (UDRS) as usual, so when Harbhajan Singh finally did trap Ponting in front, both reviews had already been wasted and a decision by Ian Gould couldn’t be contested. On played Ponting, finally with a willing ally in David Hussey, and brought up a superb century – his 6th against India and his 5th at a World Cup game – with a sweep into the leg side off Ashwin. It took something as ludicrous as a reverse-sweep to finally get rid of him for 104 as he scooped to a short third man during the Power Play, but he had given Australia a decent chance having reached 260/6 at the end of their innings.

Everyone’s favourite opening batsmen walked to the crease for India and for the first time in the World Cup so far, Virender Sehwag did not hit the first ball for four. In fact, the fluency he has shown throughout the tournament vanished and a skied pull off Watson sent him back to the pavilion for 15. Outside the loss of that wicket, India started in solid fashion with neither batsman – Sachin Tendulkar or Gautam Gambhir – scoring particularly fast.

Tendulkar departed for 53 (his 94th in ODIs), feathering a Shaun Tait delivery through to Haddin, and Gambhir fell after reaching 50, enduring two attempts to run himself out before finally managing it with a non-existent single to short third man. A mature knock had come to an infantile end. Dhoni came and went, chopping one to Clarke at point and in came another player who has struggled for form, Suresh Raina, to join Yuvraj, the last pair of recognised batsmen.

Ponting tried to put pressure on India with his quicks, but the pair was having none of it. In the 40thth over, India scored six off Tait, then 14 off Brett Lee in the next. The 42nd over, also bowled by Tait, went for 13 and featured a Harmisonesque wide which flew over the head of first slip.  Ponting was forced to bring on his slower bowlers and Jason Krezja stopped the boundaries with the 42nd and 44th overs which only went for two  and three runs respectively.

Either side of his overs, though, Shane Watson leaked runs and off the last five overs – during which the batting Power Play was forcibly taken – only 22 were required. Lee returned for it and Suresh Raina plonked him back over his head for six off the first ball. Johnson started the following over with a short ball which Raina merely helped around the corner and some good shot placement and running – hard to believe after what we’d witnessed 10 overs before – meant that India actually cantered home, with Yuvraj thrashing a ball through the covers for the win.

It is the first time Australia have been knocked out of the World Cup since they lost the final to Sri Lanka in 1996 – a game in which Ponting played. This will probably be his last World Cup game and, much as he may rub people up the wrong way (myself included), the cricketing world is better with his bat strokes in it. Cricket’s greatest stage will miss him.

And, for the record, a new champion will be crowned in 2011. The first non-Australian one in 12 years. DM