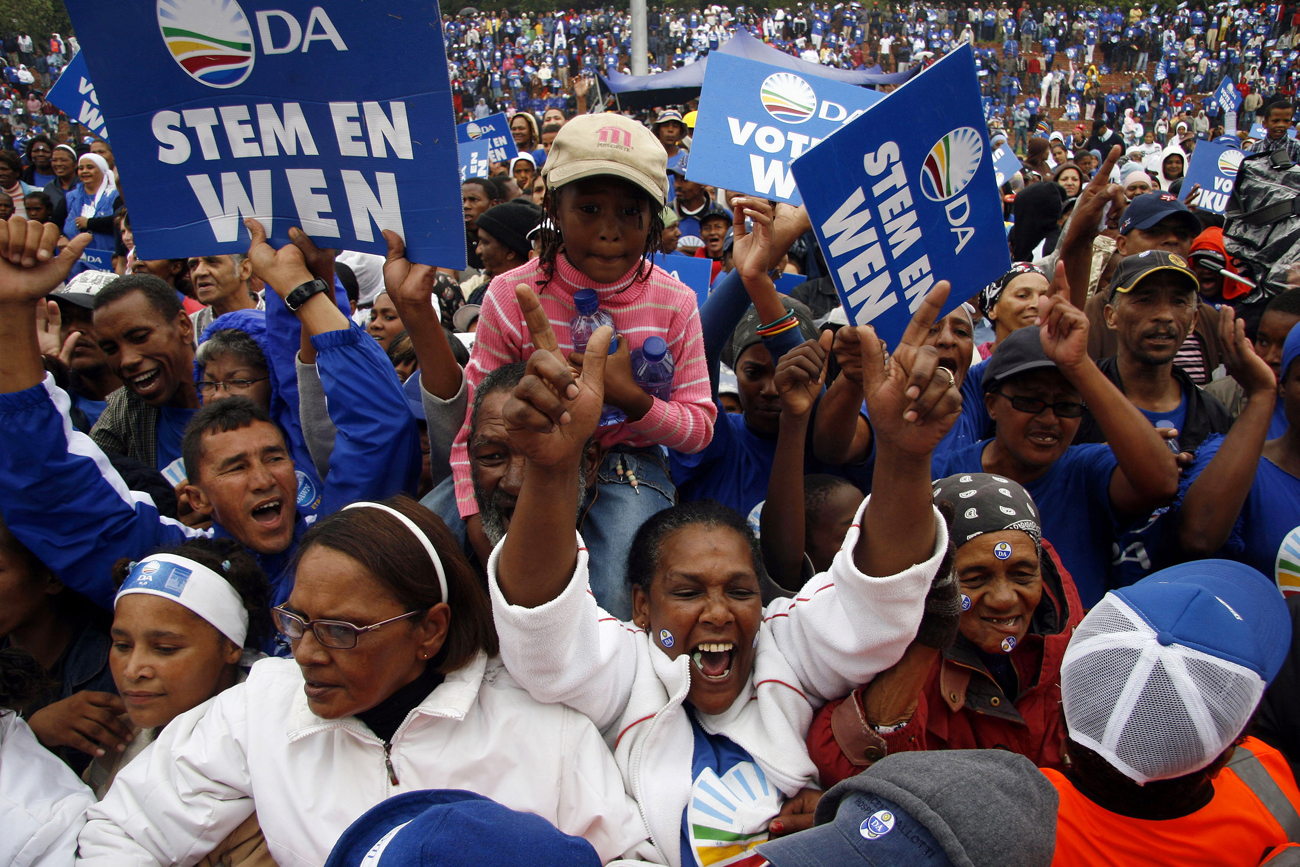 At The Daily Maverick, like with so many other SA publications, we spend a lot of time focusing on the ANC. It is the ruling party, and what happens within it matters, a lot. The upcoming local government elections are important for the ANC, and of course, for us. But for the opposition Democratic Alliance, these elections matter much more. By STEPHEN GROOTES.

Hell, the outcome of these elections could well be an important factor in who becomes our next president, and when.

It’s easy to forget how far the DA has come in the last few years. Sometimes the ANC’s propaganda bluster that the DA is a party of white people can be difficult to overcome, despite the fact that a DA congress nowadays is far more brown than white. Just five years ago it was pretty much out of office completely, it held no metro, no province. It was just an opposition party. But now it’s been in power in Cape Town for almost five years, it’s been running the entire Western Cape for almost two. That’s not really a long time in overall political terms, but it seems to have become a different era in terms of events on the ground.

This really grinds the ANC. Actually, it drives them mad. It makes it hard for the non-ruling party in Western Cape to cope. For a start, it just can’t get its crap together to create a unified provincial party of its own. While there are plenty of dynamics within the Western Cape ANC that have made it difficult for a unified leadership to take over, one of its problems has to be that it’s been under pressure. It hasn’t yet learnt the lessons of how to be an opposition. One presumes they’ve been studying from their opponents in other legislatures (they could do well to look particularly at Jack Bloom in Gauteng). But to be a pain in the butt of the ruling bunch requires hard work and constant engagement. Not easy for an inward-looking party whose members are more concerned with ousting the person next to them.

It’s been patently obvious the DA’s strategy is to turn what it calls the “story of Cape Town”, and now Western Cape, into a national narrative, to point to the city and say, “Look, here’s what we’ve done here, we’ll do the same for you too”. For the DA, this means the local government elections matter hugely. Their ultimate path to power involves many things, the de-racialisation of the South African identity, the gratitude that the ANC still invokes for liberating us to end and for policies and issues to matter more than who we are. In short, until most South Africans vote with their heads and not their hearts, it stands little chance. And even if people did vote just with their heads, the DA would still have to fight hard against what could be very good ANC policies.

So, in circumstances like these, what does a longer-term thinking opposition do? The DA has spent some serious time, money and effort on finding “the right people”, and training them up. It runs a “Young Leaders” programme, where the best and the brightest are given some serious training in thought, how to run things, how to get people to agree with you, and more crucially, on what really matters in governance. It’s a very clever system. You get the sharpest tools in the box and give them a crash course in why you think your philosophy is the best. Some of these kids will fall out over time, they’ll do other things. But while doing those things, they’ll make a mark in a way that will strengthen the opposition in the country anyway. And if one or two end up on the ANC’s national executive committee in 20 years’ time, well, maybe they’ll still govern better than they would have otherwise. For DA leader Helen Zille, “We grow our own timber in the DA”.

Step forward one of the party’s tallest young trees. Musi Maimane is the DA’s mayoral candidate for Joburg. He’s only 30, wields an iPhone and is halfway through his second (that’s right, second) Masters degree. He’s a sharp tool if ever there was one. DA insiders say there was a little surprise that the electoral college picked him, but Zille says, “He blew them away at his interview”. It’s easy to see why: He’s sharp, a good speaker, easy to chat to and fairly new to this politics thing. But his background is what will make him hard for the ANC to attack. He’s, dare we say, “pukka” black, legitimately black. He grew up in what he laughingly calls a “standard government issue four-room house in Dobsonville in Soweto that the apartheid government lovingly bestowed upon us”. His parents, two sisters and younger brother are still there. He went to school in the area at first, Catholic St. Angelas before being one of those Mbeki Children who went out of the township for high school, Allan Glen High in his case. Despite his youth, he’s been married for six years already and has a young son.

He gives the DA an ideal symbol to represent the party in Joburg. At the same time, the ANC hasn’t yet been able to agree on its mayoral candidate, so two things happen. One, Maimane has no symbol to tilt at, and two, he gives the ANC someone to attack. But he can get around this by pointing out the person most likely to take over from Amos Masondo is Parks Tau, who, as the man in charge of the city’s finances, has pretty much delivered us into the hell that is the Joburg Billing Crisis. A few months ago the ANC would have tried to use the race of Maimane’s wife against him (she didn’t grow up in Dobsonville). But recent events (the Manyi saga etc.) have probably removed that weapon from the ANC’s arsenal. Maimane is not going to be Joburg’s next mayor, despite complicated maths and talk of “perfect storms” because ANC voters are pissed off and DA voters are taking the trouble to register this time. But it shouldn’t be too difficult for him to better the DA’s 27% in the Joburg Council. And the ANC will probably get far less than the 62% it has now. But Maimane must do better than just pick up votes from the smaller parties. He should go for more.

In Cape Town, things are much easier. The DA has a candidate, Patricia de Lille, while Cosatu’s Tony Erinreich is going to be running for the ANC, and they’ll have a jolly good shouting match. The DA will win though, because the ANC has zero chance after years of making a hash of things in Western Cape generally.

Where the DA is fighting and winning, so far, is on implementation. But it still makes mistakes  The saga over the “open toilets” was a silly mistake. It didn’t have to happen, and the DA should have realised that in politics it’s not always about principle and truth – and sometimes you just have to give in to move on. The decision to drop Sowetan journalist Anna Majavu from their mailing list because of her stories about a DA councillor was also politically stupid. No matter the rights and wrongs, the DA did political damage to itself, and it allowed itself to be painted as a group of young white know-it-all’s.

The party cannot afford these kinds of mistakes. It needs to be the party of quiet governance, and in places where it rules, politics should be on pages five and six of the newspaper, not on the front page.

But, in all, they are making good progress and the local elections of 2011 are likely to be very important for DA and SA indeed. DM

Grotes is an EWN reporter.