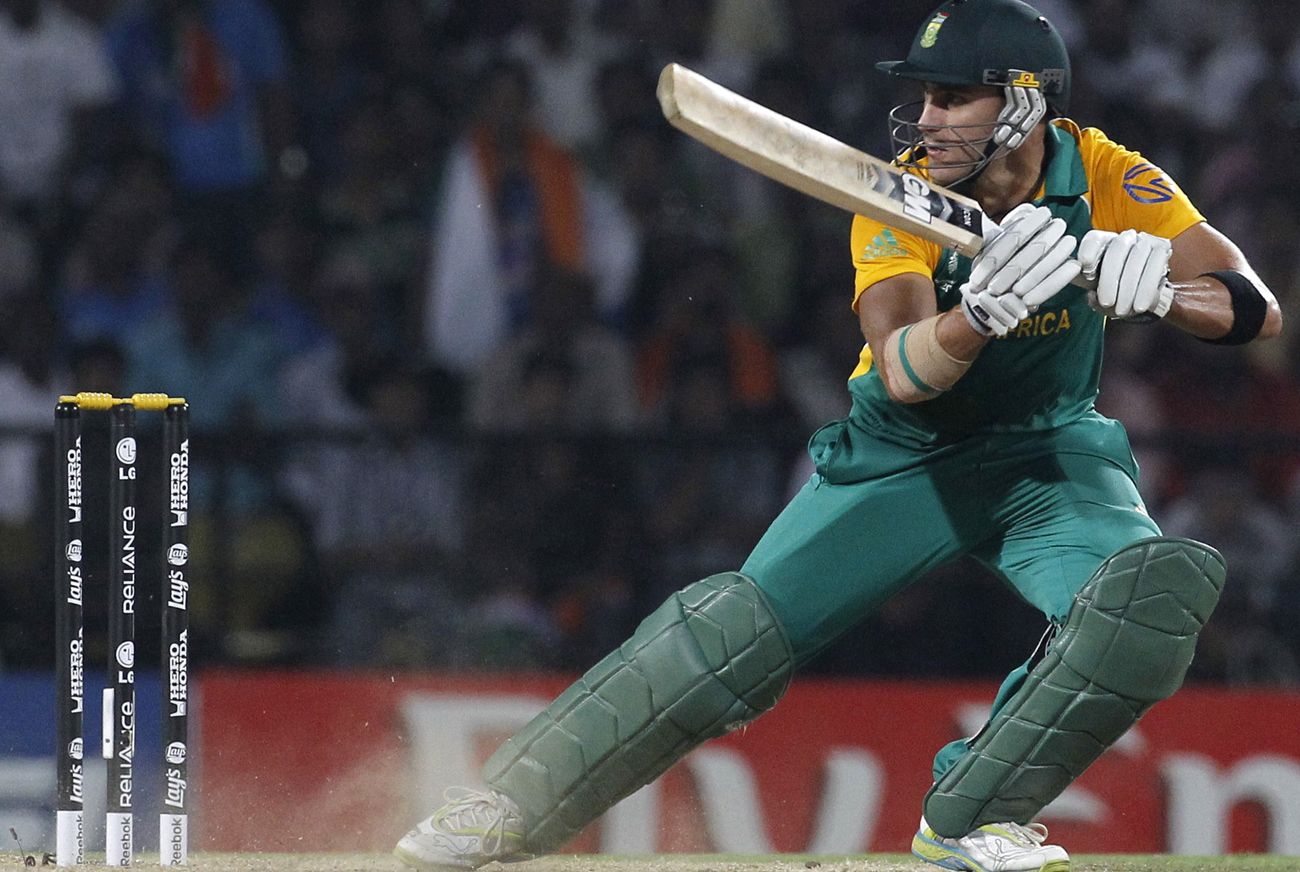 South Africa recorded a famous victory against the World Cup hosts and favourites in a tense fixture in Nagpur on Saturday, throwing the “chokers” mantle away as superb responses to serious pressure throughout the match marked their performance, including last-over drama in which Robin Peterson had to score 13 - and racked up 17 instead. By SIMON WILLIAMSON.

The first instance of these reactions to major pressure was reining in the Indian innings. It had threatened to run away into an unassailable score as Sachin Tendulkar and Virender Sehwag took advantage of a sloppy start by South Africa – including missing a standard chance off Morné Morkel’s third ball – and posted 142 in 17.4 overs. Gautam Gambhir came in after the departure of Sehwag and stuck with Tendulkar (who scored his 99th international hundred), pushing the score to 267 for 1 with 10 overs and a batting Power Play to come. It was quite conceivable at this point that South Africa could have been chasing more than 350, possibly even 400.

Johan Botha had earlier applied the brakes somewhat, pulling the run rate below seven an over with a superb spell of seven overs for only 24 after all the other bowlers had been clobbered. But as has happened throughout the tournament, the Power Play changed everything. India, having cruised to the 40th over, collapsed in the face of disciplined South African bowling and excellent fielding. Tendulkar tried to smash the first ball of the Power Play through the leg side and lobbed a leading edge to point. Gambhir, Yusuf Pathan and Yuvraj Singh also departed during the five overs, but the collapse continued. Virat Kohli popped a return catch to Peterson and then Dale Steyn destroyed the tail with five wickets in a Man-of-the-Match performance. By the end, India had lost nine wickets for 29 runs to post 296 – still a very good score, but South Africa went into the innings break feeling the match was back on their terms.

Graeme Smith captained the side well toward the end of the innings (coming back well after some really odd earlier decisions) by keeping the field up and starving the Indians of singles as Indian skipper MS Dhoni just couldn’t get on strike to build anything with the tail. It was a superb come-back – one of the best ever – but there was still serious work to be done in the chase on a dry pitch that was beginning to slow up. South Africa began the chase in usual fashion, electing to keep wickets in hand and have a thrash at the end – a tactic that would ultimately, yet marginally, prove successful. Smith, however, still looks remarkably out of form and his situation with Zaheer Khan is becoming Warne-Cullinanesque as he was dismissed by the bowler for the 13th time. Jacques Kallis joined Hashim Amla and the pair kept the innings steady in the face of commentators and fans alike whining about the lack of boundaries.

What many people fail to understand is that South Africa are absolutely superb in the middle overs of an innings. While many teams stagnate outside the initial Power Play overs, South Africa’s scoring rate, in general, actually increases – AB de Villiers is the best in the world at that point in an innings and Amla is third best, taking into account runs scored, strike rate and how often they go out. And it is this principle that applied once again as I think the number of twos we ran today was the major difference between the sides. Amla and Kallis raised the runs-an-over rate at about the same speed one turns a cruise ship, but it was indeed on the up when Harbhajan Singh dismissed Amla with one that spat off the deck and brushed his edge on the way through to Dhoni.

Kallis, who continued as the anchor, was then joined by De Villiers who injected the innings with exactly what he usually does – using his feet to the spinners, timing the ball superbly and exuding exactly the correct assertive body language required. His 52 off 39 balls sped the innings up and gave South Africa an excellent shot at victory before he was caught on the long-leg boundary and Kallis ran himself out.

A piece of sharp captaincy by Smith involved taking the batting Power Play just after the mandatory ball change, even though South Africa had just lost a wicket. It worked and Proteas took 52/1 off the five overs and forced Zaheer Khan into bowling out earlier. Dhoni would have certainly preferred Zaheer to bowl two of the last three overs instead of one.

JP Duminy was stumped off a wide after scoring 23 off 20 balls and it was once again left to the lower order, along with Faf du Plessis, to scrape the runs required for victory. Morné van Wyk came and went pretty quickly, and his selection as the reserve wicket keeper still mystifies me. Although he may be a better batsman on paper than Mark Boucher, Boucher is a better keeper, an excellent finisher, bats well with the tail and has the BMT of someone who’s returned from war.

The fallen wickets had swung this yoyo of a match back in India’s favour, but then came the second big response to major pressure.

Johan Botha’s short, but sharp innings of 23 off 15 balls swung the momentum back the Proteas’ way. When he was out South Africa required 17 off the last two overs, and then 13 off the last. Robin Peterson wound up on strike for the last over, which was surprisingly bowled by Ashish Nehra when many of us expected Harbhajan Singh to be given the ball.

At this stage I would have said India were the favourites to win, particularly as Du Plessis, the better batsman was off strike. Peterson, however, kept a cool head on his shoulders. He swung so hard at the first ball of the over that the resultant wind may have changed the temperature in Nagpur, but his inside edge went down to the fine leg boundary for four. Nine needed off 5 balls.  Nehra (mystifyingly) bowled another length ball which Peterson swung at again and this time he connected – a huge six sailed over cow corner and the match clearly swung South Africa’s way with 3 needed off four balls. A scampered two meant only one was needed and a smash to the cover boundary while, Indians and South Africans were hyperventilating, off the next ball sewed up the win.

While South Africa played well, India did let themselves down somewhat. Zaheer Khan has the ability to spear reverse-swinging yorkers in at will, but none of him, Munaf Patel or Nehra produced any. The outfielders also should have put more pressure on the South African running, with the amount of twos costing them dearly. The decision not to play Ravichandran  Ashwin or Piyush Chawla also hurt them today – 10 more overs of high-quality spin could have made a huge difference.

With fixtures against Ireland and Bangladesh to come, and only one victory required for a confirmed quarter-final spot, with renewed confidence South Africa look set to keep the momentum going.

And perhaps we’ll get a respite for a few days from those who screech “choke” after every South African loss. DM