Analysis: Zuma has a battle on his hands, again 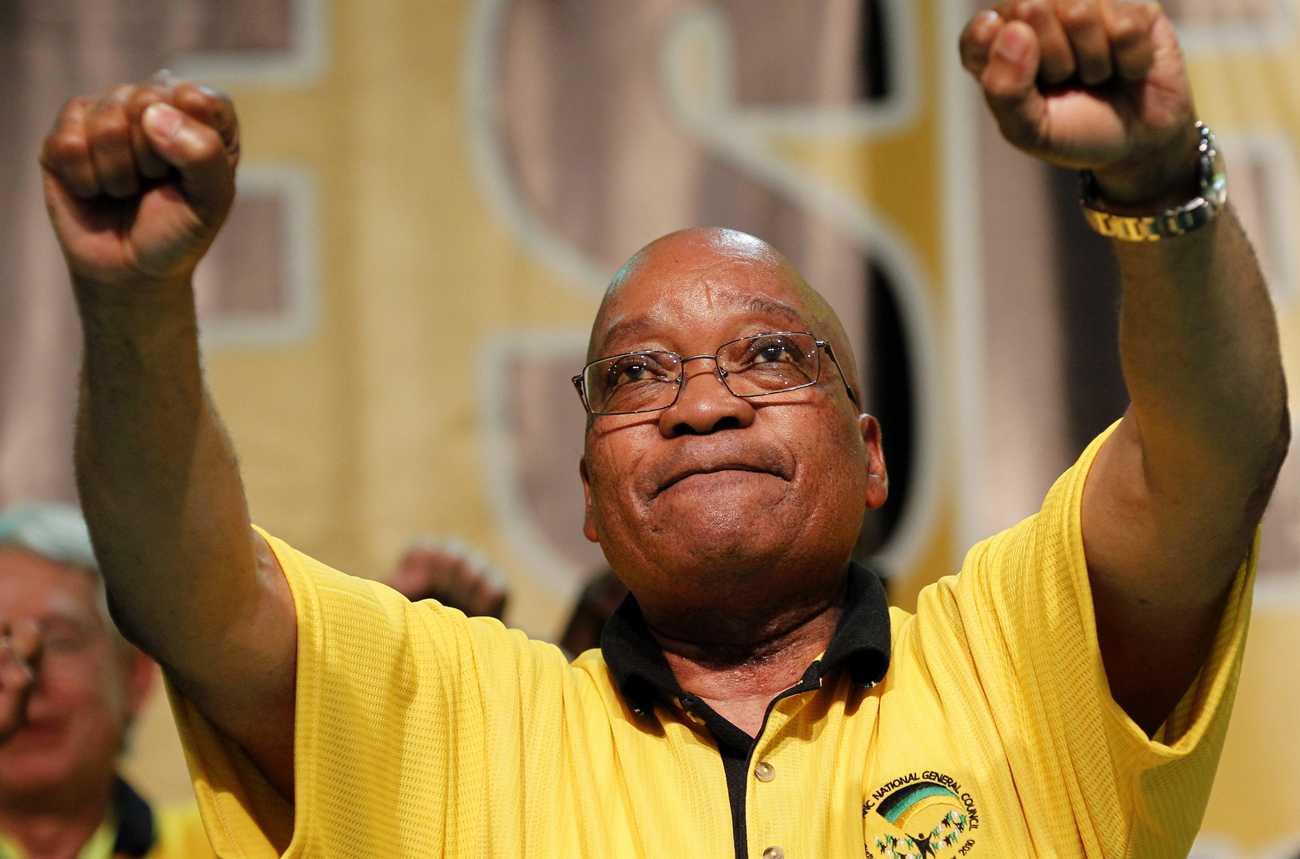 Early this year President Jacob Zuma appeared firmly in control and on top of things both ANC and government. Suddenly, in the space of a few weeks, things have changed again. Suddenly the forces that would seek to undo him are gathering and growing. By STEPHEN GROOTES.

Only a month ago Zuma was standing tall. He’d delivered his State of the Nation address that found a non-ideological way to perhaps start the process of creating jobs. The nightmare he went through in early 2010 was fast receding, and he’d won the “middle ground” of the ANC at last year’s national general council. His statement that “youngsters must listen to their elders” had reverberated around our politics, to the extent that he was the MacDaddy once again. Even Julius Malema was quietened.

The way news emerges out of the ANC often makes it difficult to view a true picture and in real time. The fourth dimension is always seriously affected by the fact that virtually all the bits and pieces and facts and factoids that emerge are according to someone’s agenda. Even when “facts” are true, the timing of their release and the mechanism by which we get to know things means we don’t necessarily see their true nature. When facts suddenly emerge in a big spread, it can look like it’s the result of a leak. If they are the result of good old fashioned journalistic investigative work, you’ll probably find that someone who passed on a vital fact was not necessarily leaking, but certainly was a human being with failings. And of course, yes dear reader, we as the Fourth Estate do have our own issues.

So this means that while it now looks as if the fight for 2012 has started now, in the first quarter of 2011, it’s always been there. Probably since the Wednesday morning after the Tuesday evening that saw Zuma take the mantle from Thabo Mbeki. But it is now becoming clearer who some of these forces are, and what their intent might be.

In September 2010, Zuma and ANC secretary-general Gwede Mantashe appeared to become politically one. Their speeches at the national general council had clearly been written together, and with one intent, to stay in power and to keep a lid on dissent. This worked. It was clear that if you messed with one, you messed with the other. But it also meant, for some, if you were an enemy of one, you were now also an enemy of the other. In a way perhaps with a longer-term view, this opened up more fronts for both of them.

The duo who gained most from this are Malema and sports minister Fikile Mbalula. They learnt last year that for Mbalula to become secretary-general of the ANC, not only must Mantashe be defeated, but Zuma too. And the duo decided to go public. They held their coming-out ceremony at last week’s announcement of the ANC’s local elections manifesto. Malema was spokesman with his “This is not a democracy of families”.

It was, of course, a shot at the Guptas, the family currently providing accommodation and some of life’s other necessities for Zuma’s son, Duduzane. It was a calculated attack, bolstered by the Sunday Times revelation that there were concerns at the highest level about the influence of the family on the President.

While the Guptas have had to hit back by themselves, the only real entity that’s come to their aid is the MK Military Veterans’ Association. When it revealed it had a shareholding in a Gupta company, all was explained. The fact they’ve become slightly tainted politically is perhaps an indication, not necessarily of how worried other ANC leaders are about them, but of how people are perhaps afraid of getting involved in this fight. Being between Malema and Mbalula on the one side, and the greatest come-back kid South African politics has known would be awkward at the very least, politically life-threatening at the worst.

The response to the Jimmy Manyi fiasco has also been revealing in looking at the range of forces within the ANC at the moment. Planning minister Trevor Manuel can hardly be called a Zuma-ite. Thus you would think it would be easy for him to have been completely slammed since his open letter to Manyi on those ill-considered comments he made about Coloured people in Western Cape. But the highest profile person to have a go so far has been Paul Ngobeni. Ngobeni, while being seen as in Zuma’s camp, is no political heavyweight. He may have been involved in some of the legal dealings in killing the corruption charges against Zuma, but his moral authority (click here to see the “wanted” poster) is dented somewhat by the fact that he’s still wanted for jumping bail in Connecticut. If Ngobeni is the highest profile person Manyi can get to help him, then he’s in more trouble than he knows. It also shows us Zuma’s appointment of Manyi doesn’t have Cabinet support. No minister has come to his aid and officially the ANC has been saying very little. There’s certainly been no full-blooded support. And yes, while that may be motivated by the political situation in Western Cape in an election year, the party has come to the support of some pretty ropey characters in its time.

Cosatu’s response to the whole thing, which fell just short of actually calling for him to be axed (it wants an “investigation” and feels this casts aspersions on his “ability to hold high office”) also tells us the trade union federation is ready to challenge Zuma on some issues. While giving the ANC its traditional support for the upcoming local government elections, its support for Zuma can surely only be soft at the moment. While not campaigning actively against him, he may have to give Cosatu something soon, or else.

The SACP’s condemnation over the weekend of the “conservative forces” who are making hay out of all of this is typically SACP at the moment. Its policy towards pretty much all the important issues in the ANC can be defined in just one term – fence-sitting. There sometimes seems to be almost a complete inability for the SACP to make a decision about an alliance issue. But this also means its support for Zuma could be softening. But for the SACP to jump either way, an opponent would have to first emerge and be gaining real momentum.

Having said all this, for Zuma to start losing any sleep whatsoever, at least two things need to happen. One, the ANC needs to get a real pasting in this year’s municipal polls, and two, a credible candidate needs to emerge. If the elections are a disaster, Zuma can be blamed. It doesn’t matter if it’s his fault or not, but he could be the fall-guy. He promised service delivery, it didn’t happen, cheers. While the ANC is unlikely to emerge from these polls any stronger than it is now, Zuma may be able to escape the blame. But he’ll have to be pretty clever about it.

Whether another candidate will emerge is the much more interesting question. Ask us now who it’ll be and we’ll have to say Kgalema Motlanthe. We reserve the right to change our minds at any time, and for any reason. But Motlanthe is so far the only guy doing any running. And crucially, he seems to have the respect and possibly the backing of the Malema/Mbalula axis. His reception at ANC Youth League events has been particularly telling. To win elections in the ANC you need someone to give you their full-blooded support no matter what, and then you start to build momentum from there. Mbeki had Nelson Mandela, Zuma had the League. We should watch Motlanthe’s dance around the League very closely.

Last year Zuma was in a far worse state than he is in now. There had been a disastrous State of the Nation, an unexpected “love-child” and generally unhappiness abounded. He was able to turn all of that around. But this seems to be different now. This looks more calculated and the result of a plan. It is no coincidence that we saw, at pretty much the same time, the headlines about Guptas and seemingly wasteful expenditure around the renovations  that are about to be done to Zuma’s residence.

This means people aren’t just unhappy with him. It means people are plotting against him. And timing matters here, December 2012 (when the ANC’s Mangaung conference will be held) is closer now than a year ago.

It would be foolish to write off Zuma. He is a brilliant politician, who came back many times before, even without the advantage of incumbency he now holds. But as more information emerges, at a time and point determined by those who gain from the release of such information, it does look he may have a fight on his hands. DM