Discovery’s final flight: Planet Earth is blue and there’s nothing we can do 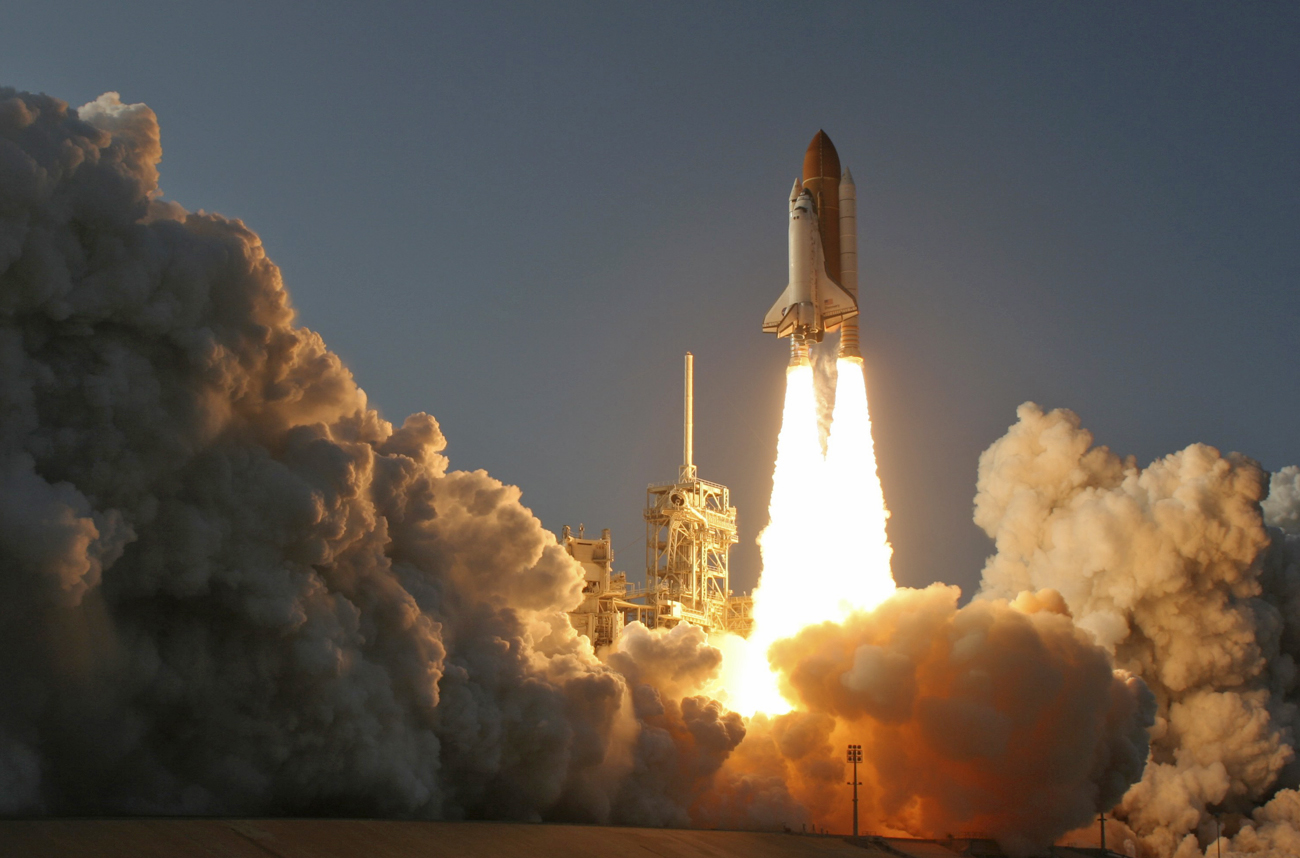 Tragedy, bravery, disappointment, heroics - all the dramatic twists and turns inherent in exploration. NASA’s space shuttle programme has been part of collective human experience since 1981. On 24 February, USS Discovery made its final voyage, signalling the end of an era. What comes next? By RICHARD POPLAK.

We see it in the distance – a carnation blooming on a plain of dun-coloured Earth. The petals open to reveal a smoky proboscis that extends skywards. The trail moves quickly, gaining hundreds of metres every second. “It’s fast,” says a voice on the other end of the camera. So begins an amateur video posted to YouTube immortalizing the final flight of the space shuttle Discovery – the swansong of the 30-year-long initiative that has alternatively gripped and horrified the planet.

The YouTube video, taken from a commercial aircraft, went viral almost as quickly as Discovery cleared Earth’s atmosphere. It brought an element of awe to a phenomenon that had become sadly passé. Even before USS Columbia exploded over the southern US during re-entry in 2003, the romance was over. Launches had become routine. Long past its best-by date, it was time to shut down the programme.

Twenty-seven years after its maiden voyage in 1984, Discovery began its final journey on a clear Floridian day, en route to the International Space Station to deliver both goods and maintenance. It was one of six shuttles to form part of Nasa’s space shuttle fleet, instituted in the mid-70s to create reusable Earth orbiters that could make repeated voyages. Along with Enterprise, Challenger, Atlantis, Columbia and Endeavor, the programme was astonishingly successful, if outmoded and dangerous by the time the final Discovery flight blasted off.

As the YouTube clip suggests, there is nothing prosaic about a rocket leaving the atmosphere. I’m not sure whether I actually remember the first shuttle mission, or whether my mind has constructed a memory for me. (What individual human memory amounts to in the information age? A question for another day.) On YouTube, good Lord, is it an awesome sight! A fury of fire and smoke, followed by a sleek, polished machine rising from the chaos at a stately pace. It ascends, buoyed by all this sturm und drang, and burns out into darkness. It is unholy, elemental and awe-inspiring.

Discovery, the fleet leader, will have made 39 missions when it returns to Earth on 7 March. It has spent almost a full year in space, and orbited our planet 5,628 times. This is its 11th, and final trip to the ISS. It outlasted Challenger, which exploded in 1986, killing the first civilian in space, teacher Christa Mcauliffe. And it outlived Columbia, which crashed on re-entry in 2003. What, one wonders, will replace these craft?

When US President Barack Obama arrived to give a major address at the Kennedy Space Centre on 15 April 2010, he did not do so as the country’s most space-friendly commander-in-chief. Nonetheless, he sounded all the right notes. “By the mid-2030s,” he said, “I believe we can send humans to orbit Mars and return them safely to Earth. And a landing on Mars will follow. And I expect to be around to see it.” Which is all very well, until you realise that—in an era of cutback-fundamentalism—the “space exploration” line on an annual budget looks like an easy kill. To see that Mars landing, the Obama administration needs to start spending now. Luckily, political expediency may play a role: Into the king-making, swing state of Florida every administration must shovel pork, and the loss of jobs at the Space Centre means trouble. Obama will have to keep the taps open, however slow the trickle.

And what a trickle it is. Replacement craft for the space shuttles have hit snag after snag. Lockheed Martin was unable to effectively develop its awesome-looking X-33 craft, which, in artists’ renderings, looks like a sleek luxury yacht boosted by two vast afterburners. (The X-33 was designed as an unmanned, single-stage-to-orbit craft, which meant no pesky, fallible astronauts and bulky rockets.) The significantly less awesome Orion craft—think of an enormous Coke can with two flattened umbrellas plonked at either end—would have carried up to eight crew and a payload, until it was hamstrung by budget cuts and delays. George W Bush insisted its maiden voyage would take place in 2014. That is all but impossible now. Orion was in turn part of the Constellation programme, developed to get us further into the solar system, all of which has withered on the interstellar vine—killed in part by Obama’s new space policy.

It’s worthwhile asking, at this point, whether anyone cares? The real tragedy, as the space shuttle undertakes its final mission, is that we have lost the sense of wonder that made this sort of thing possible in the first place. In the four decades since the first moonwalk, the optimism, curiosity and derring-do that once drove us skywards has curdled into a dullard’s disinterest. I actually prefer this reading to the alternative—that our rush into space was merely a Cold War contest to weaponise the heavens before the Russkies did, and that our sense of blissed-out rapture was a result of the propaganda pouring forth from our television sets. We’re a species of homebodies, content to sit on the couch and watch rockets blast off on telly, so long as we don’t have to pay for it.

Either way, the glory days of government-funded space exploration are behind us. Or, at the very least, on an extended sabbatical. We are still tethered to this rock as firmly as we were 50 years ago. The politics behind Nasa, like the politics behind everything, has become toxic and divisive, and space is once again the sole purview of Hollywood. The Chinese, the Russians and others will fart prestige satellites and other craft into space, but without significant international—read US—cooperation, they are pretenders. Indeed, space exploration has always been an international effort. It isn’t called the International Space Station for nothing. Canada, Britain, France, Russia, China, and India have all played major roles in developing the programme and many other besides.

But it never pays to count out the human spirit. There are hundreds of individuals, some of them with means, who look heavenwards and want answers to that essential question—What’s up there? Space exploration is privatising, which was part of the mandate of Obama’s new programme. Essentially, Nasa will be renting aircraft from private aerospace companies, who will in turn benefit from generous subsidies and humungous contracts. There is every chance that the first mission to Mars will be brought to you by Nike, and the craft will resemble F1’s logo-riddled supercars. It doesn’t matter. We need to keep exploring. That’s what makes us human. DM

Photo: Space shuttle Discovery lifts off from the Kennedy Space Center in Cape Canaveral, Florida, February 24, 2011. Six astronauts are aboard on a mission to the International Space Station. REUTERS/Pierre Ducharme.