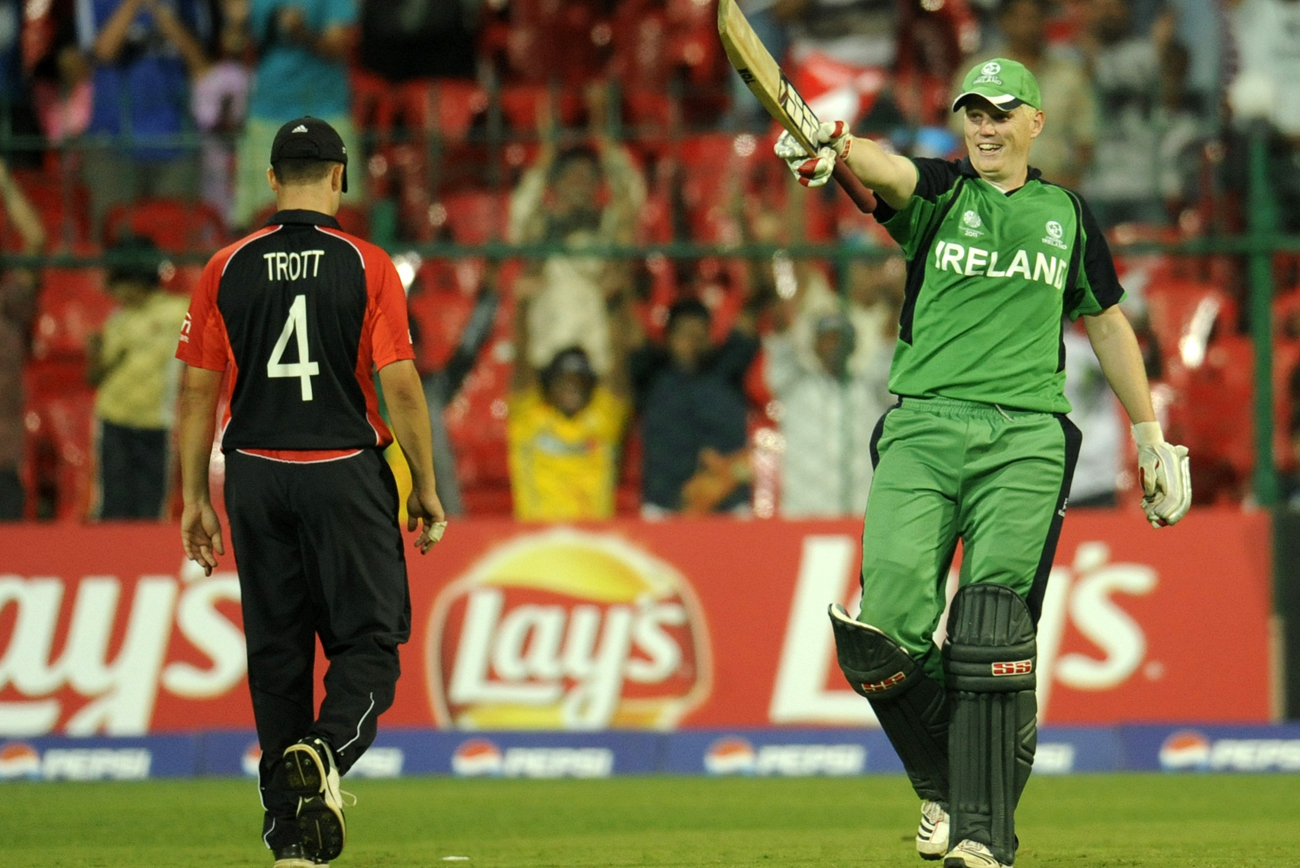 Three quarters of last night’s cricket fixture between England and Ireland was precisely what we had all expected. Until the utterly unexpected and unpredictable happened – cricket’s version of changing water into wine. By SIMON WILLIAMSON.

England batted first and again Kevin Pietersen opened with skipper Andrew Strauss. KP opening, so far, hasn’t set the world alight, but neither has he disappointed to the point of forcing a change. Although he clipped 59 off 50 balls, he is yet to play the authoritative knock we are awaiting.

The real guts of the innings came from Johnathan Trott and Ian Bell, who put on 167 together.  During Trott’s innings of 92 he reached 1,000 ODI runs in only 21 innings, tying with Kevin Pietersen and the great Sir Vivian Richards. It is quite phenomenal that two of the premier one day international players in the world today – Trott and our own Hashim Amla – were considered unsuitable for the shortened version not all that long ago.

England put up what seemed a match-winning score of 327/8, but last night was a great reminder that this sport can change tack whenever it so chooses.

Ireland’s reply stuttered initially – their top two players, William Porterfield and Ed Joyce scored a first ball duck and a slow 32 respectively, and when the team struggled to 111/5 it looked to be pretty much over.

An edged four from a Swann delivery kicked his innings off, but it was an over from the other England spinner, Michael Yardy, which really got him going with a pulled four off a long hop and a drive through extra-cover. Swann’s next over saw O’Brien clear the boundary twice and the stage was set.

What O’Brien proceeded to do was take the match by the scruff of the neck and then beat the hell out of it – it was like watching a real-time mugging. Strauss brought Stuart Broad back to try to quell this resistance and he was deposited to the point boundary. The next Swann over featured a delicate tickle down to fine leg for four and only then did we realise that O’Brien was actually batting with someone else – Alex Cusack – who thunked two fours and ably supported O’Brien in a partnership of 162 off 103 balls, after the pair had come together with Ireland requiring 218 at nearly eight runs to the over.

The pair took the Power Play at the beginning of the 32nd  over and Yardy started it with a mixture of wides and rubbish legal deliveries which cost England 16. Anderson returned, presumably to stem the flow of runs, but a short delivery was smashed over the leg side boundary to bring up O’Brien’s 50 off 30 balls, the fastest in Ireland’s history.

The innings astounded England – as I think it would have anyone – and the wheels really began to fall off as spilt catches, sloppy fielding and missed run-outs (due to some deplorable running by the Irish) were intertwined with more boundaries from O’Brien’s ferocious blade. Every decision Strauss made failed in the face of Ireland’s aggressive hitting – the mandatory ball change resulting in an over costing 17 from Anderson, and the Power Play, taken in the 32nd over had added 62 to the Irish total. Bresnan, England’s best bowler in the game against India was treated like a bowling machine as two crunching blows for a four and a six took O’Brien to 90 off 42 balls.

On 91 O’Brien offered another opportunity when he skied Paul Collingwood, but Strauss couldn’t hold the catch. Yardy dropped Cusack off his own bowling, but moments later, off his 50th ball faced, O’Brien ran two with a shot into the leg side and raised his bat for his 100 – making the previous World Cup fastest century record (by Matthew Hayden against South Africa in 2007) off 66 seem like it was previously held by Geoffrey Boycott.  This glorious innings will never be forgotten, whether the feat is eclipsed or not.

It was fitting that a run-out eventually broke the stand as Ireland’s running between the wickets was as inept as England’s fielding. Cusack’s innings ended as a result of crap running and in came John Mooney. Momentum faltered somewhat to Mooney somehow keeping O’Brien off strike, but eventually the man of the moment fell – to another piece of shocking running – after he had blasted 113 of 63 balls. Bangalore showed its appreciation with the excellent send-off it gave the match-winner-to-be.

Mooney managed to scrape a few fours along with a superb drive by Trent Johnston off a Broad full toss as the Irish survived the pressure, knocking a four off the first ball of the last over to seal a very famous victory.

Ireland’s response to quite intense pressure at the business-end of the innings was a great credit to them. Once O’Brien had plundered England and brought the required rate down to something achievable it never got away from them, even when the pace of the innings slowed.

These men in green are earning their stripes: they beat Pakistan in the 2007 Cup and should have beaten Bangladesh last week. A victory over England, though, will taste sweeter than any Guinness one can find. Except the ones being served back in old Blighty, of course. DM