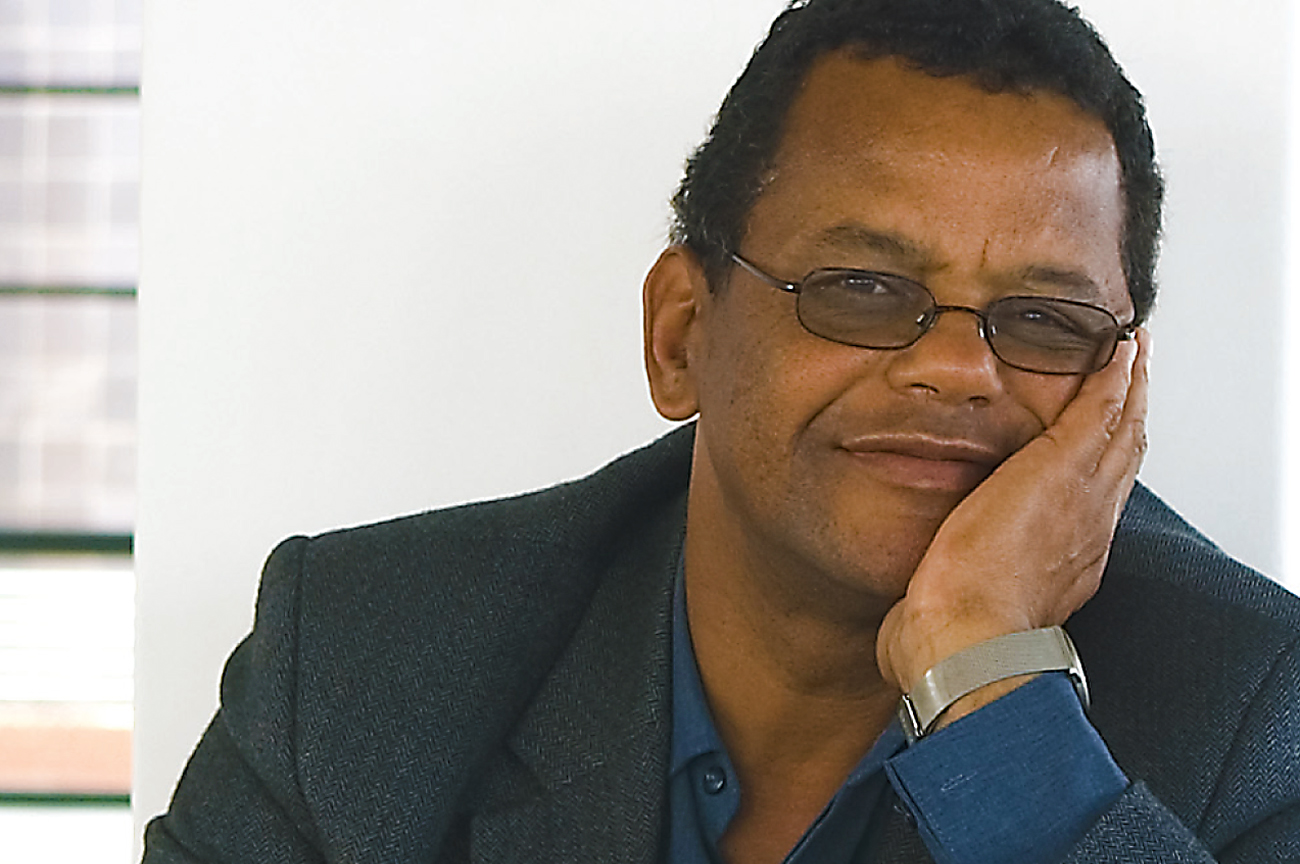 If you haven’t watched television news on the public broadcaster for a while, there may be a reason to tune back to that channel. From March, former SABC, Reuters and etv hard newsman Jimi Matthews returns to the helm of television news. His frank talk in a rare interview with The Daily Maverick may just surprise, perhaps even delight you. By MANDY DE WAAL.

There hasn’t been much positive to say about the SABC in recent years between besieged CEOs, that damaging court ruling that proved political interference and the unending board dramas. But following Zuma’s big cabinet reshuffle, which saw Roy Padayachie replace Siphiwe Nyanda as communications minister, there’s been much promise of improvement. Padayachie came in with fighting talk about improving leadership at the public broadcaster and was accessible and willing to speak to the media. He also put that ridiculous draft Public Service Broadcasting Bill on hold. You know, the one which mooted 1% of personal tax would be put aside for the SABC, brought to you by Nyanda.

If that wasn’t enough to make us all exactly cheery and reach for our remotes, the much-maligned group executive of news Phil Molefe gave people a reason to start watching SABC TV news again with the announcement of the return of veteran newsman Jimi Matthews as head of television news. No stranger to the job, Matthews worked his way up through the ranks, but proved himself with his performances as head of television news at both etv and SABC, as well as the ill-fated Telkom TV. These experiences make Matthews realistic about the challenge facing him, because, as challenges go, this one is a monster.

“Anyone who understands television will tell you it will take three to six months before any kind of difference is visible, and it would probably take the better part of a year to sort out some of the issues at SABC TV News,” says Matthews. “I think it would be unreasonable for anyone to expect that within a month of my arrival there would be dramatic or radical change. To effect change takes time, because of the complex and complicated process of producing television.”

It’s that kind of under-promise, and hopefully over-deliver, pragmatism that makes it easy to respect Matthews. That and the fact he’s under no illusion about what is waiting for him when he walks through the doors at Television Centre in Auckland Park at the beginning of March. “The public broadcaster is an important institution because for the majority of people living in this country it is their only source of news and information. The SABC has never been an easy place to work, but I think there are good people at the SABC and I am sure if we work together we can pull the place together.”

Matthews is at great pains to point out he can’t say too much from the outside looking in and has to wait to get into the SABC once again before he can talk about the job he has to do. What’s remarkable is he’s talking at all because over the past few years everyone who’s sat in the lead seat at SABC TV News have either been “schtum”, spoke by proxy via that perennial corporate spin doctor Kaizer Kganyago, or just spun their own. Matthews will be replacing Snuki Zikalala-appointee Amrit Manga, who stepped down to become economics editor. Speaking to Sunday Times, Molefe said Manga’s move was not a demotion, but had more to do with the former SABC TV News head’s contract expiring.

There’s something refreshing about Matthews’ candour which seems to echo Padayachie’s era of openness in a department of communications that is seeing an about-turn from the days of former SANDF General Nyanda and his predecessor, the tragic “Poison” Ivy Matsepe-Casaburri. A man who’s always been well liked by his peers and team, Matthews says one of the first things he’s going to do is create a space for people to be creative so they can boldly practice their craft.

“You can approach journalism as something where you regurgitate statements and documents issued to you or you can intelligently interpret the issues and events around you. I want to encourage people to think and be bold. This doesn’t necessarily mean being controversial, provocative or confrontational. But it does mean doing your job as a journalist with confidence.”

To achieve this Matthews says he will need to instil in the newsroom an ethos in which editors support and defend reporting staff, which hasn’t always been the case. Another focus for him will be giving a voice to the marginalised. “The SABC is probably the only news organisation that has the resources, the platform and the will to articulate the aspirations of the poor and the marginalised.”

Matthews highlights the recent truck drivers strike as a case in point. “The coverage on the truck drivers strike gave a sense of what the implications are going to be on the economy, and there was a lot of reporting on vandalism and thuggery, but I have yet to see the mainstream media reveal the main reasons for the strike beyond the negotiations. Nowhere do we hear about the conditions under which people work. Yes, it’s a huge disadvantage when Johannesburg runs out of petrol, but what about the truck drivers who go home to families – without a salary?”

It is Matthews’ history that locates him with the marginalised and those who sit on the fringes of the media. “The eighties was an extraordinary period for journalism in this country in that it allowed us to nail our colours to the mast. Those of us active in progressive organisations, and in what was regarded as the alternative media, developed a particular view and vision of what society could be. On a personal level, I have always located myself within the mass democratic movement.”

Here Matthews goes out of his way to explain that he’s not referring to a particular political party or an allegiance to an ideology, but rather he means people in the broadest political sense who engage with the struggle of everyday existence. One gets the sense that Matthews takes great care to make himself understood because the mere act of dialogue with someone who has a leadership role in the SABC is fraught with the possibility for misunderstanding or manipulation.

When it comes to the subject of political interference, Matthews is unflinchingly frank. “I think it would be naïve to imagine that there won’t be political pressure or interference because it comes with the territory. This is not peculiar to the government or the ANC. You’ll remember recently the DA blacklisted a certain reporter because of bias. How is that different from the SABC being accused of blacklisting people because they don’t like their bias?” Though The Daily Maverick has made the distinction between blacklisting and removing individual reporters from a preferential list, Matthews’ point demonstrates he doesn’t approach his job with rose-tinted spectacles.

Matthews says every newsroom has its preferred analysts or the “dial-a-quote” favourites journalists habitually turn to which support a prevailing newsroom ideology. “What is stupid is to exclude people simply because you don’t agree with them. It is fundamentally wrong, and part of our job should be to provide as many views as possible. Basic journalism requires that we give exposure to as many voices as possible. If we are only going to broadcast the views of people who agree with us, whether this is at the SABC or anywhere else, we only do our viewers and readers a disservice.

“And when I mention the DA in reference to the blacklisting saga, I’m not taking a knock at them. I’m just saying it is not unusual. That doesn’t mean I’m saying it’s right. I don’t for one moment suggest that it is right. I am merely explaining that it goes with the territory.”

Why’s Matthews taking this job that some might call a Sisyphean challenge? “If I didn’t think I had the ability to make a difference, there’d be no point now would there? Despite everything the SABC has been through, it is capable of producing television. It has been doing this every day. Whether that television is engaging is another matter.”

Given Matthews’ track record with etv and SABC TV news there’s room for cautious optimism about the public broadcaster’s television news channel and it’s certainly enough of a reason for The Daily Maverick to stop channel hopping at 19:00. DM

Photo of Jimi Matthews by Sally Shorkend for Maverick magazine.