Jaipur, Rajasthan: A lesson in chaos, beauty and confus...

Jaipur, Rajasthan: A lesson in chaos, beauty and confusion 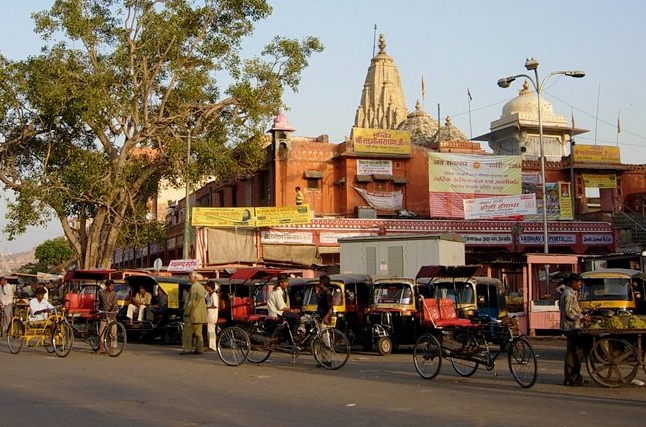 The “pink city” of Jaipur, capital of the desert state of Rajasthan, has long been heralded as one of the most beautiful on Earth – to arrive in the place from South Africa is nothing less than a full-scale assault on the senses. No wonder the most esteemed literary festival in the world is held here, and even less wonder 2011’s event was mired in controversy. By KEVIN BLOOM.

It’s obvious as soon as you leave the airport – this place resembles nothing you’ve seen before. The first clue is the traffic, which flows like a permanent interpretive dance; chaos choreographed into some higher order that only the most attuned senses can navigate or understand. Technically, drivers in India keep to the left side of the road, but the law gets bent so regularly you can’t help thinking somebody in central government has repealed it and it’s just taking a while to get to the provinces. In Jaipur, the capital of Rajasthan, there’s no such thing as waiting behind slower vehicles or pausing at intersections: you don’t stop in the hope you’ll get a gap, you create one. Still, in the face of motorbikes cutting across four lanes without indicating, tuk-tuks making sudden and unannounced U-turns, and buses overtaking on blind rises, there are surprisingly few accidents. Everybody appears to anticipate what everyone else is about to do.

Which is perfectly symbolic of the way history seems to play out here. Jaipur was pre-modern India’s first planned city; all facets of society are supposed to have their place. The structure reflects the tastes and sensibilities of the Rajputs (the elite warrior caste), and the broad avenues that carve the city into nine blocks are representative of India’s entrenched social system – each urban sector is demarcated to fulfill a specific purpose, with the central palace block serving as the focal point. Built in 1727 by Maharaja Jai Singh II, the city is in essence a homage to the principles of Indian sculpture and architecture known as “shilpa shastra”. This ancient mystic science combines elements of astrology and ayurveda, and is meant to bring happiness and prosperity to residents living within its influence. Of course in 2011, despite the tales of India’s economic boom, there’s very little visible prosperity in Jaipur; the wealth is in the paradoxes and ironies.

Like the following one, centred around the Jaipur Literary Festival, which took place here a month ago. Founded by the Scottish writer and journalist William Dalrymple, the choice of the city as a site for one of the world’s major literary events – attendees in 2011 included JM Coetzee and Orhan Pamuk – appeared inspired. As Dalrymple wrote in an article for Newsweek:

“J… is one of the world’s most beautiful cities, with rich literary and cultural traditions of its own, as well as the most wonderfully benign late-January climate. My heart always lifts as I leave fog-bound Delhi and head onto the Jaipur highway. Within a couple of hours you break through the pollution and find yourself in sunlit mustard fields. A couple of hours more and you are amid camel carts and brightly colored Rajasthani turbans. By the end of the journey, you are driving past the bastions and terraces of Amber Fort, the lake palace of Jai Mahal, the pink city walls, and the lines of courtyard houses or . It seemed the perfect venue for a festival.”

Aside from bagging some major names, one of Dalrymple’s missions for the event has been to highlight those Indian authors who write in India’s 22 non-English national languages, 122 regional languages, and 1,726 mother tongues. Although he acknowledged in the piece the “ironic proposition” of Salman Rushdie that certain people can’t bear the fact that India’s best writing since independence may have been done “in the language of the departed imperialists,” he could hardly have anticipated the wrath that was about to greet him. On January 22, the political editor of Open magazine, Hartosh Sing Bal, asked how Dalrymple “became the pompous arbiter of literary merit in India,” and claimed Jaipur worked not because of its “literary enterprise, but because it ties [India] to the British literary establishment.” Bal then added: “Getting that literary establishment to take note of India requires making use of a certain romantic association that stretches back to the Raj.”

The irony in the attack was twofold. Firstly, unlike authors of the ilk of Vikram Seth, VS Naipaul and Rushdie himself – who write successfully about India from abroad – Dalrymple has lived most of the last 25 years in India, and his home is currently in Delhi. Secondly, his own writing and actions have proved that he’s not only a committed anti-colonial, but a fierce egalitarian. The 2010 Jaipur Literary Festival was noteworthy for including 30 Dalit (“untouchable”) poets on the programme, and every one of their sessions played to a packed house.

“There are no reserved spaces for grandees,” noted Dalrymple, “no roped enclosure for our authors; they mingle with the crowds and eat with them on a first-come, first-served basis. In as hierarchical a country as India, this is rather radical.”

And writing this piece from the Diggi Palace Hotel, the beautiful 200-year-old building where this year’s festival was held, “radical” would appear to be the word. Yesterday, on the main avenue a few hundred metres away, a Dalit in rags lay face down in the dust. Motorbikes and tuk-tuks swerved dangerously close to his outstretched limbs, seemingly aware and oblivious of his presence at the same time. The only people that commented were Westerners; a sure sign that we didn’t understand. DM

Photo of Jaipur by Hiquinho Silva.