U2 in Johannesburg – the real greatest show on earth 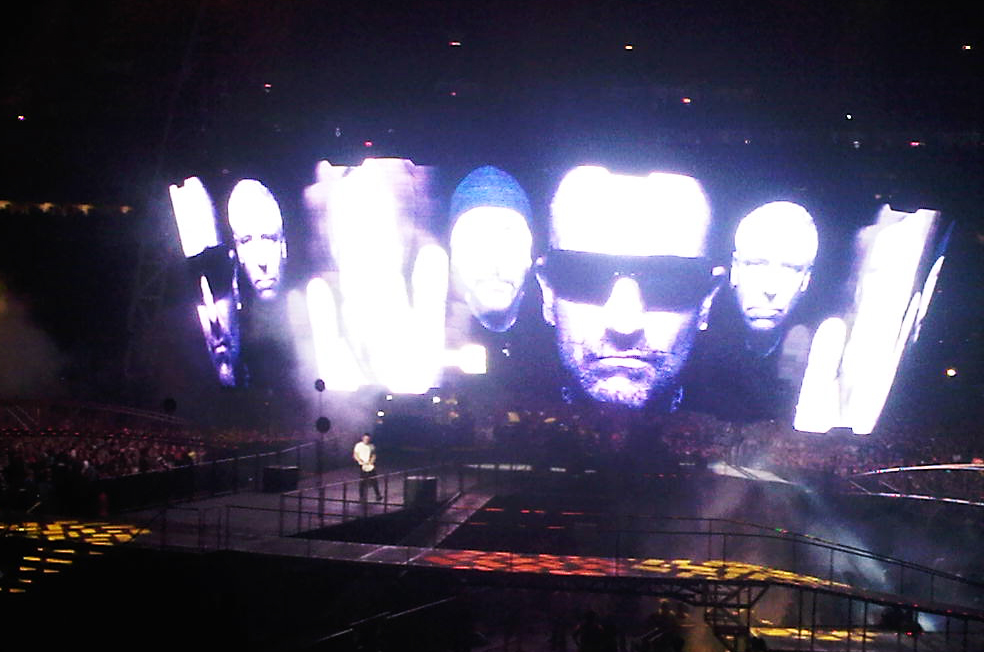 It’s not often one gets to attend an event on your doorstep that can now arguably be billed as the greatest entertainment spectacular on the planet. Putting aside the cigarette advertisement hyperbole for a second, that’s exactly what four ageing rockers from Dublin achieved on Sunday evening, under African skies: The greatest show on earth performed live, at the greatest stadium on the planet. By STYLI CHARALAMBOUS.

Many will have woken up Monday morning, having been wowed by a perfect storm of entertainment events. A beautiful late summer’s day in a venue that still provides goose bumps as hordes of dedicated fans marched upon FNB Stadium. Not even the trainspotting-equivalent public loos outside the stadium could quell the enthusiasm of the thousands that braaied and hydrated from early on Sunday morning.

Wading through the crowds of people Nasrec station expelled on to the outer grounds of the stadium, one could almost touch the excitement and anticipation in the air. It easily matched any feverish build up to a Springbok or World Cup opening game, with the only thing missing the usual South African aggression towards opposing teams. People cheerfully let cars cut into queues waiting to park and even the security guards were beaming as we smuggled half-jacks of vodka into the Calabash.

Only one aspect of the day was disconcerting. This seemed to be largest gathering of Toyota bakkies outside of a Blue Bulls vs Cheetahs match at Loftus. I could imagine just how many of these spectators had been conceived with a bottle of Klippies and “Sunday Bloody Sunday “playing on a tape deck following a pool braai, circa 1984. Given Bono’s infatuation with “the Arch”, Madiba and the freeing of the rainbow nation, I wondered out loud why there was such an overwhelmingly white audience inside the stadium. Sure, a couple of middle-aged Dubliners were never going to have the new black middle-class clambering for tickets. Maybe their supporting efforts were only noticed after the struggle had been won or maybe black leather pants and yellow shades just don’t resonate with hip-hop kultcha. Either way the almost exclusively pale crowd provided a stark contrast to the bright orange seats and postal code of the stadium.

Probably the only letdown of the evening was the queue for beers (once the vodka was consumed) and the supporting acts. Mariam and Amadou were billed as “African superstars”, which I am sure is true in their home country of Mali and some “best foreign artist a whiny voice category” at the Grammys. I understand the intention to promote African music, but local bands would have used the opportunity much better. A band with a distinctly coconut flavour like Freshlyground would have gone down a treat compared to what the promoters served up.

And the Springbok Nude Girls, improbably still together, still managed to exude a great stage presence and energy, bringing back some fond vague memories of varsity parties. But I couldn’t help feeling they reminded me of those ridiculously popular first team rugby players from high school who ended up working as photocopier salesmen and reminiscing about their glory days to anyone who’ll listen. At this point, I just hoped this wasn’t a case of the sort-of-pretty girl hanging around with fatter ugly girls, so that she would seem more attractive. I had been disappointed before by a big band on big stage, most notably the Red Hot Chilli Peppers, live in Hyde Park. Not even the worst band in the world supporting that day, could save the Peppers from a dismal show.

But there was none of that disappointment on Sunday. Once the bland starters had been concluded, the group notorious for impressive grandeur of their stages and live performances were in no mood to let down their adoring fans. The stage was like something out of a Jules Verne novel, that looked like some kind of massive spider, with a upright protruding phallus. The stage almost stole the show as the moving visual displays and booming sound kept even the seated sections on their feet. A 360° display meant every one of the 100,000 strong crowd never felt disconnected from any part of the fanfare. Bono, slightly less vivacious than years gone by, still managed to swing from a neon lit microphone as he belted out hit after crowd-joining hit. I had fully expected to use my leftover Fifa World Cup vuvuzela ear plugs when Bono’s inevitable save-the-world-and-all-its-political-prisoners’ soliloquy was being delivered. But I was so caught up in the moment and joy of the occasion I would have even bought a Steve Hofmeyr album right then if he’d told us to. While booze, drugs and groupies remain the driving force for many of the great bands from yesteryear, I will not begrudge them if campaigning and activism is one of the motivating factors that allow U2 to continue putting us in raptures with their magic and talent.

As entertainers extraordinaire, U2 certainly know how to play to the crowd, with gratuitous use of images and sound bites of Madiba and the Arch. By the time Hugh Masekela was introduced as a guest performer on stage, any controversy surrounding the “shoot the boer” hullabaloo was quickly erased from memory. It seemed as though the show was over in a flash. Of lights and superlative sound, that is. The day had passed so briskly, as all pleasurable occasions do and not even the prospect of two-hour road scrum to get home could dampen the mood of the multitude that had just witnessed the greatest show on earth.

In early 2000, Bono famously stated that U2 were reapplying for the title of best band in the world after the album flop that was “Pop”. Anyone in attendance at Sunday night’s performance will agree that no other band need apply. Position filled, and I suspect for a long time to come. DM

All photos: The Daily Maverick