Zimbabwe’s independent media brace for violence ahead of elections 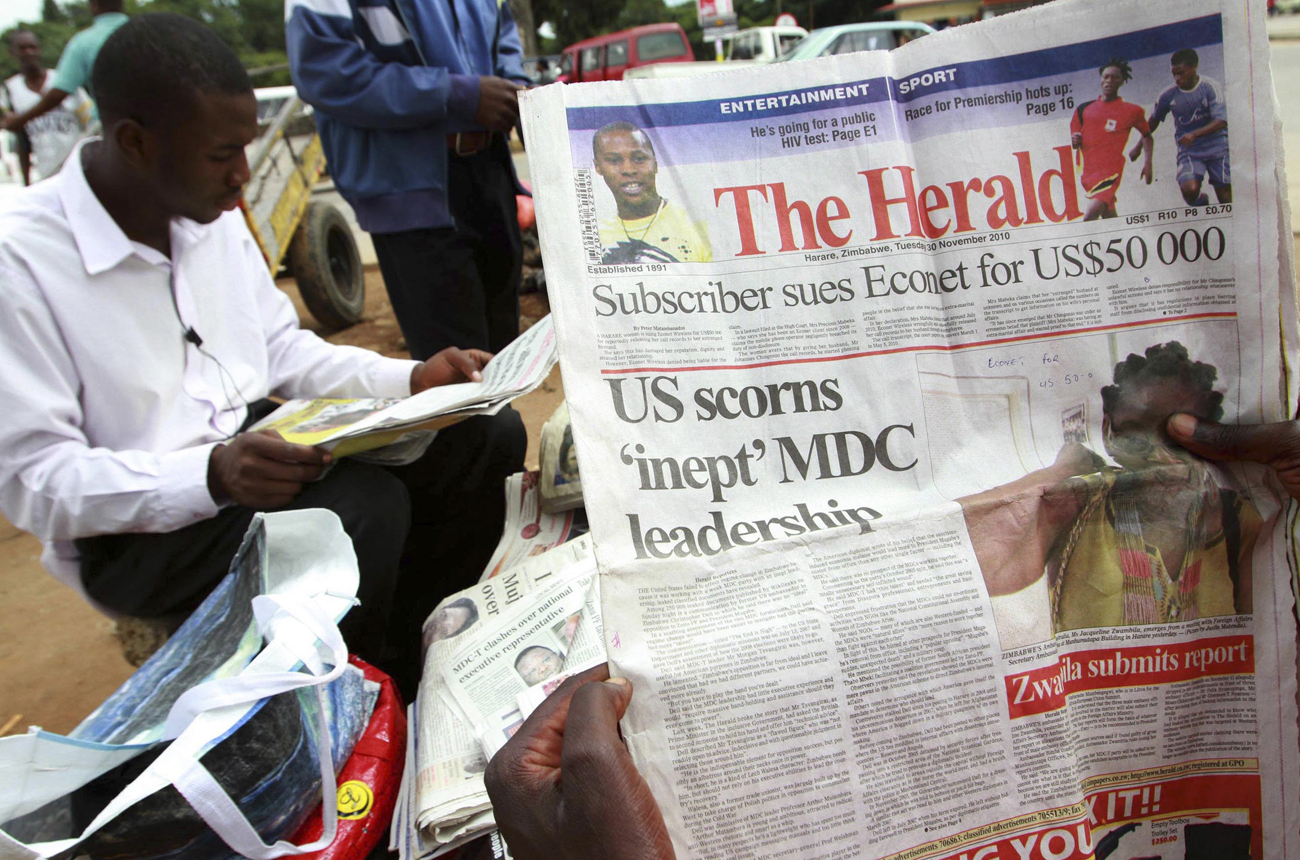 Robert Mugabe has indicated Zimbabweans will go to the polls in June when he stands for president - yet again. His regime's legal machinery still enables press harassment and intimidation, while WikiLeaked documents may yet result in Morgan Tsvangirai being charged with treason. All signs point to painful times for freedom of expression in Mugabe-land. By MANDY DE WAAL.

As Zimbabwe moves closer to elections it is becoming increasingly difficult for the independent media to do their job. Reports from media watchdog organisation Misa-Zimbabwe said soldiers recently prevented vendors from distributing weekly independent, The Mirror. The newspaper ran a story on how the army had beat up civilians which was headlined: “Soldiers run amok”. Army officials later made contact with the paper to apologise, a rare occurrence in a country that witnessed the widescale intimidation of media during the 2008 elections

“Elections in Zimbabwe over the past decade or more have been associated with violence which is the only weapon Zanu-PF knows as a way of getting votes,” said Trevor Ncube, who publishes The Zimbabwe Independent, The Sunday Standard and Newsday. “Every time you talk of elections you know violence is going to be unleashed as a way of intimidating people and making people vote for the ruling party. This goes hand in hand with intimidating the press so it doesn’t cover certain things or go to certain places. Media intimidation gives the state-hired hands free rein to operate and bully the electorate without the press covering these things.”

In the midst of the turmoil in the Middle East, Time magazine has just listed Mugabe as among it “top 10 autocrats in trouble” – though whether that has any impact on the aging and seemingly impervious despot remains to be seen.

Late last year a journalist from Ncube’s The Sunday Standard was arrested and held in Khami Prison in Bulawayo for 10 days after writing a story about the police recruiting Zimbabwean war veterans ahead of the elections. “Our journalists are being arrested on trumped-up charges really and this is the way the police settle scores with the independent press for having covered certain things that the police do not want covered,” said Ncube, who added that the problem in Zimbabwe is an undemocratic constitution and legislation designed to protect the state from criticism.

“Zimbabwe still has a constitution that is not democratic and that is oppressive. The constitution doesn’t recognise or protect freedom of expression. Zimbabwe has legislation that stifles the space for democratic discourse and is intended to serve the ruling party by insulating the president from criticism. It also protects the military and similar state structures. This undemocratic dispensation cannot be allowed to continue. To some extent Zimbabwe is a police state at the moment because the security forces and the intelligence basically do as they wish.”

As a revolution sweeps across Egypt and other autocratic Arab nations and Egyptian President  Hosni Mubarak has vowed not to run for re-election, the big question is whether the same events would unfold in Zimbabwe. In an interview with Fox TV, Morgan Tsvangirai, Prime Minster in Zimbabwe’s coalition government said people resented dictators. “There are two issues. One is the general resentment of autocratic regimes, the manner in which these governments have stayed in power forever and ever. I think people resent that, naturally. But there is also another aspect which I have pointed out before. The aspect of incumbents leaving power to their children – dynasties, as we may call it. That is resented by the people. I think what we are witnessing here is a general suppression of the people. People are demanding more freedoms and there is nothing wrong with that.”

Tsvangirai leads Zimbabwe’s opposition party, the Movement for Democratic Change (MDC) which of late expressed the fear bloodshed would occur if Mugabe pressed ahead with elections. Speaking to The Guardian during a global poverty summit in Johannesburg, MDC secretary general Tendai Biti said elections in a Zimbabwe that had not yet been reformed could see a repeat of the brutal 2008 elections during which the MDC says 253 of its members were killed.

“The chances of it being a bloodbath right now are probably more,” Biti said. “It’s not a possibility, it’s a probability. Violence is rising now, hate speech is increasing and unconstitutional statements from generals are increasing right now. There’s a lot of work that has to be done by Zimbabweans, by (South African) President Zuma, by the Southern African Development Community, by the African Union, because all the signs, all the symptoms are not good. They are reflective of a reproduction of June 2008.”

The situation hasn’t been made any easier by the release of diplomatic cables by WikiLeaks that revealed that Tsvangirai’s MDC received funding from the West, called for increased sanctions to put pressure on Mugabe’s Zanu-PF and expressed the intent to undermine Mugabe’s leadership. A “secret panel” has been assembled in Zimbabwe to assess the thousands of documents released by WikiLeaks to determine whether Tsvangirai could be charged with treason, an offence that could be punishable by death.

“WikiLeaks has been very harmful to Zimbabwe in terms of the goal for normalising the political situation, as well as for the agenda for change,” said Ncube. “WikiLeaks has served to strengthen Robert Mugabe’s government, which is using the information to hit out at members of the opposition ahead of the election. WikiLeaks has become a very useful tool for Mugabe and his government, which is very unfortunate. It hasn’t aided the agenda for democracy or accountability. In fact, it has taken the country back five years.”

News from Zimbabwe is that the “secret panel” to ascertain whether Tsvangirai will be charged with treason is filled exclusively with Mugabe loyalists. This as fresh reports of political violence started streaming in from Zimbabwe this week. DM

Photo: Zimbabweans read copies of the state owned Herald newspaper on the streets of Harare December 3, 2010, as they react to comments made by former U.S. Ambassador to Zimbabwe Christopher Dell in leaked documents published by Wikileaks. REUTERS/Philimon Bulawayo