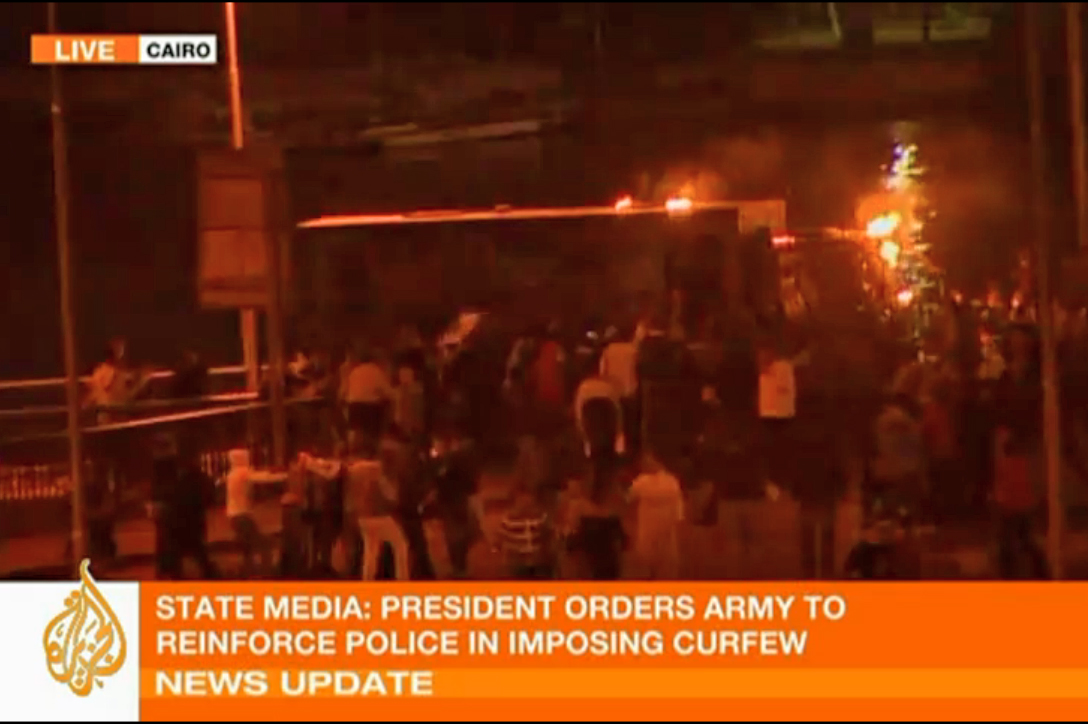 For those in television news, Al Jazeera has been a contender for the past five years. Dogged by American scepticism, it has valiantly – and to a high standard – built its reportage of Arab and Middle Eastern affairs. The 2011 revolutions have seen it assume its rightful status as the go-to news network in the region. By SIPHO HLONGWANE.

On 15 November 2006, Slate published an article titled, “Fair and Balanced: What to expect from Al Jazeera’s English-language channel”. It was this day that the Qatari satellite television network launched its English language channel. At the time, America was three-and-a-half years into Iraq, followed by the TV camera crews who were eager to replicate CNN’s coverage of the first Gulf War. Salon’s mistrust for Al Jazeera was undisguised. “The channel promises a Middle Eastern perspective on world news, but should Americans trust Al Jazeera – best known to many for airing Bin Laden’s videotapes – to be unbiased in its reporting?” they sniffed.

Until then, the network was more famous, at least in America, for airing the al Qaeda leader’s tapes than for its reporting. The worry stemmed from the fact that the network was launched in 1996 by decree of the Emir of Qatar, Sheikh Hamad bin Khalifa al-Thani, who’d loaned the network 500 million Qatari riyals ($137 million). The station was supposed to be self-sufficient by 2001, but when that didn’t happen, it received subsidies of up to $30 million a year from the emir. Due to the cash injections, many have seen Al Jazeera as an extension of the Khalifa al-Thani’s power and influence, though the network itself vociferously maintains it is editorially independent.

The cash injections have paid off. The network’s English-language channel now reaches 220 million households in more than 100 countries, and the entire network employs an army of more than 400 journalists in 65 bureaus across the world.

The independence of Al Jazeera from the emir’s influence has been tested before. Khalifa al-Thani is possibly the only person to ever stand down the Darth Vader-like former US vice president Dick Cheney and live to see another day. The Independent’s Robert Fisk recounted the incident in a recent column, “When [the Emir] visited Washington during the Bush administration and was invited to see Dick Cheney, he was astounded to see the then vice-president with a large file on his desk, marked ‘Al-Jazeera’. What’s that for, the Emir asked? Cheney told him he intended to complain about the channel’s coverage of the Iraq war. ‘Then you’ll have to speak to the editors in Qatar,’ the Emir replied – and walked out of the room.”

The network’s coverage is from an Arabic point of view and has always focused on suffering in Middle Eastern dictatorships propped up by the US. Their coverage in areas like Israel is more sympathetic and understanding of Palestinian issues any other network’s or TV station.

Al Jazeera’s coverage of the second Iraqi war may have earned it enemies in America, but what is undeniable now is that its coverage of the crises in Tunisia and Egypt is leaps and bounds ahead of any other international TV network. While Tunisia’s Burning Man revolution caught America’s major networks off guard (leading to the incongruity of networks like Fox News and MSNBC reporting on banalities while a major world news story broke), Al Jazeera already had feet on the ground providing reports. Even as the other networks struggled to find an American angle, calling the Tunisian uprising in turns the Twitter revolution, the Facebook revolution and the social media revolution, Al Jazeera was informing the rest of the world what was happening in the restless Maghreb countries.

They repeated the feat in Egypt, and have since provided the most stunning coverage of the protests in cities like Cairo and Alexandria. Al Jazeera’s coverage is not just important for what it shows to the rest of the world as much as what it shows the Egyptian people. The network is not only showing the Egyptian protesters that the rest of the world is watching, but after the government shut off communications in the country, it is coalescing and perhaps even helping drive the protests by showing reports of countrywide unrest. After running a story on bodies in Cairo’s morgues, which showed that protesters were indeed being killed by police (a direct contradiction to the government’s claim), the network was ordered to shut down. Al Jazeera has stoically refused to stop broadcasting from Egypt, even after some of its journalists were briefly detained. The network is getting around attempted news blackouts from the authorities by turning to bloggers and Twitter users who are in the streets to generate content, and by opening up a phone line which turns calls into tweets.

Inasmuch as the Maghreb protests may be the region’s Berlin Wall moment, the crises have been Al Jazeera’s rite of passage. Middle East coverage will now never be complete without Al Jazeera’s take on it. By playing such a pivotal role in sparking popular outrage across countries, it has made an indelible mark in the world and emphatically shown that where the Middle East is concerned, there is only one channel worth turning to. DM