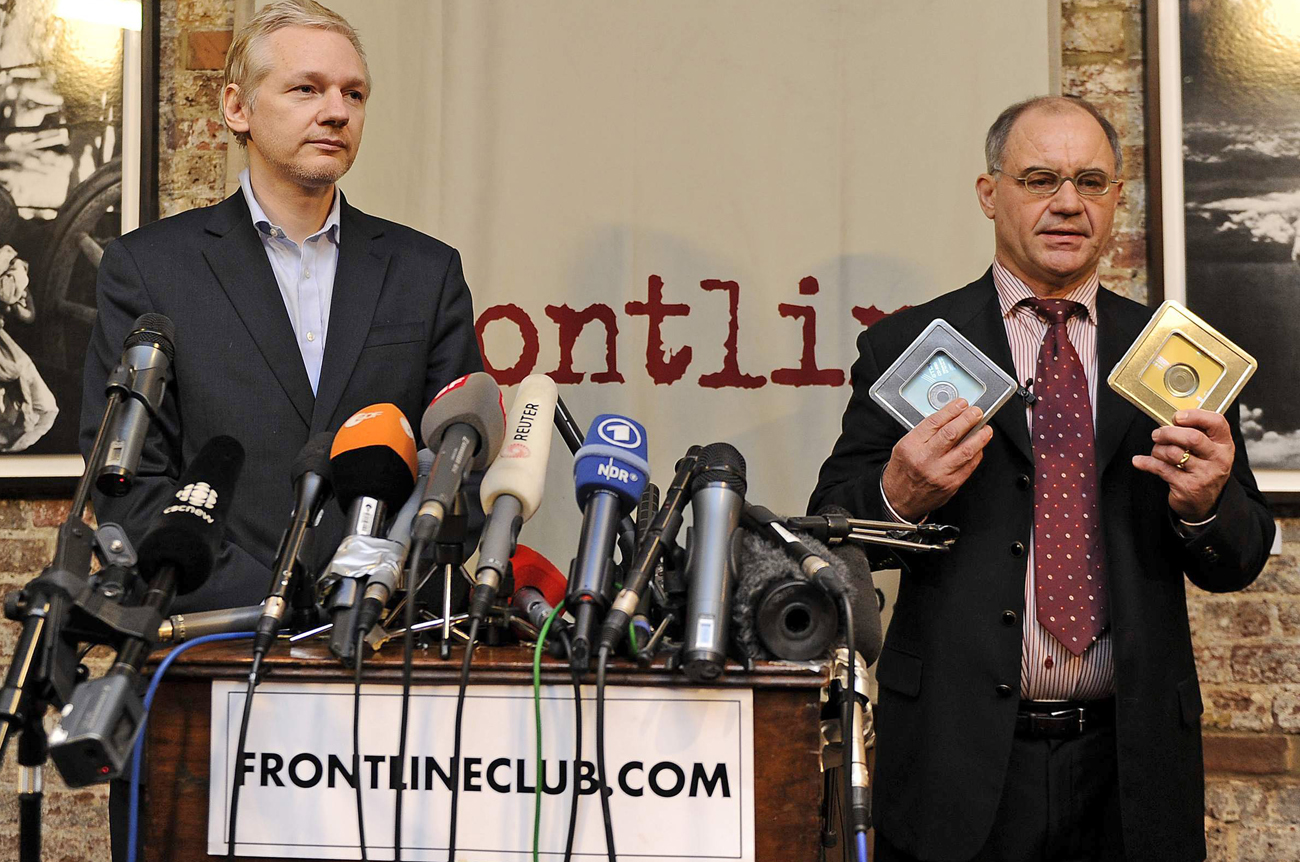 A former high-ranking Swiss banker handed over two CDs he says contain information of tax dodging by more than 2,000 “high-net worth individuals” and corporations to WikiLeaks’ Julian Assange on Monday. If WikiLeaks publishes the information, it will be signalling a return to its original whistleblowing ethos. By SIPHO HLONGWANE.

At a news conference in London on Monday, Rudolf Elmer handed over two CDs to WikiLeaks frontman Julian Assange. Elmer, a former employee of Swiss banking giant Julius Baer, said the CDs contained information on more than 2,000 people and companies who used Baer to evade taxes. “I think, as a banker, I have the right to stand up if (I think) something is wrong,” he said.

Elmer worked for Julius Baer from 1987 till 2002, where he had risen to the position chief operating officer for the bank’s Cayman Islands division. There he claimed to have found evidence of tax evasion, and his employer’s complicity in the illegal activities. The bank denies the charges, and accuses Elmer of fabricating documents and threatening two staff members.

The information given to WikiLeaks is of clients on both sides of the Atlantic, according to Elmer, who described them as “business people, politicians, people who have made their living in the arts and multinational conglomerates” in an interview with The Observer.

“What I am objecting to is not one particular bank, but a system of structures,” Elmer said. “I have worked for major banks other than Julius Baer, and the one thing on which I am absolutely clear is that the banks know, and the big boys know, that money is being secreted away for tax-evasion purposes, and other things such as money-laundering – although these cases involve tax evasion.” Photo: Ugland House (R), which houses the office of the Cayman Islands’ largest law firm Maples and Calder and is the registered office of some 18,000 companies, on Grand Cayman Island is seen in this handout released September 25, 2009. REUTERS/Alan Markoff.

The former banker lived in self-imposed exile in Mauritius after being sacked at Julius Baer and became a loud whistleblower against Switzerland’s banking industry. Elmer’s efforts have already seen him entangled with the law in Switzerland. He was held in Switzerland for a month in 2005 on suspicion of contravening banking secrecy laws. In 2008 he supplied data about 15 tax-evading customers to WikiLeaks, which were published on its site, evidence of illegal activities at Julius Baer’s Cayman Islands branch. The bank obtained an injunction against WikiLeaks (struck down at a later stage), barring it from displaying the information.

“I agree with privacy in banking for the person on the street, and legitimate activity, but in these instances privacy is being abused so that big people can get big banking organisations to service them. The normal, hard-working taxpayer is being abused also,” Elmer said.

He was arrested in 2010 and faces trial in Switzerland for contravening banking laws. If convicted, he could face up to eight months in prison.

Unlike the Diplomatic Cables leak, (which took up all of WikiLeaks’ resources without revealing much, if any, skulduggery on the US government’s part), this leak harkens back to the smaller, more traditional forms of whistleblowing the organisation embarked on (it is amusing to see WikiLeaks described as an “anti-corruption website” by The Guardian back in 2007) when it was first founded.

The most uncontroversial (and arguably, most fruitful) period of whistleblowing for WikiLeaks was from 2006 until 2009, when it published smaller caches of documents that often sought to expose individual acts of wrongdoing. The first documents published by WikiLeaks were orders for the assassination of government officials by Somalia’s Sheikh Hassan Dahir Aweys. In August 2007, The Guardian published a story on the corruption by former Kenyan leader Daniel arap Moi based on leaks published by WikiLeaks. In November of the same year, the unclassified but not-for-civilian-eyes US Army’s Standard Operating Procedures for Camp Delta document was leaked, which showed that some prisoners at Guantanamo Bay were off-limits to the International Red Cross, something the US authorities had previously denied.

The following year brought new revelations, including top secret documents of the Church of Scientology, the Yahoo email account of Sarah Palin and a list of all the members of the far-right British National Party.

Trying to keep the world’s most powerful superpower on the straight and narrow by revealing details of its wars and clandestine messages between its diplomats is proving to be a bit difficult for Assange and WikiLeaks, what with the ever-looming threat of jail and the squeeze of American companies who provide services to WikiLeaks. Trying to pry open Switzerland’s infamous secrecy surrounding banking is not going to prove to be any easier either.

Such secrecy was codified into Swiss law with the passing of the Banking Act of 1934, which made it criminal for banks to share information about private clients with third parties, including authorities. Legend has it that the Swiss passed the law to protect their clients (and the profits they generated for the country) in the wake of the public scandal in 1932 after the French MP Fabien Alberty took to the floor of the national assembly in Paris and raged against prominent members of French society for hiding money in Switzerland to avoid taxation. Alberty called the tax evaders “men of a particularly ticklish patriotism, who probably are unaware that the money they deposit abroad is lent by Switzerland to Germany.”

The secrecy that Swiss banking law allows has often been criticised as a way for individuals and corporations to hide wealth, and indeed the Swiss bank UBS has been caught by the US in the act of teaching clients how to evade tax.

It will be interesting to see whether the US uses the information given by Elmer to WikiLeaks to legally pursue any people or corporations for evading tax. As the US government is currently trying to find a way to bring criminal charges against Assange and WikiLeaks, would it not be an implicit act of legitimisation if they then used information provided by WikiLeaks to chase other people?

Like Silicon Valley companies who sue each other in one division, and collaborate in another, WikiLeaks’s interest in Cayman Island tax havens aligns it with President Barack Obama, who promised to clean up offshore tax evasion in 2009. During his election campaign, he often pointed to a five-storey building in the Cayman capital, Georgetown, which was then the registered address of more than 12,000 companies. “Either this is the largest building in the world or the largest tax scam in the world,” Obama said. The sting which caught out UBS was part of US authorities’ efforts to crack down on American citizens hiding their money in foreign countries. The irony would be rich indeed if Assange or anyone else at WikiLeaks were to face a judge in the US for leaking information while Obama urges greater transparency from the Cayman Islands and Switzerland. DM