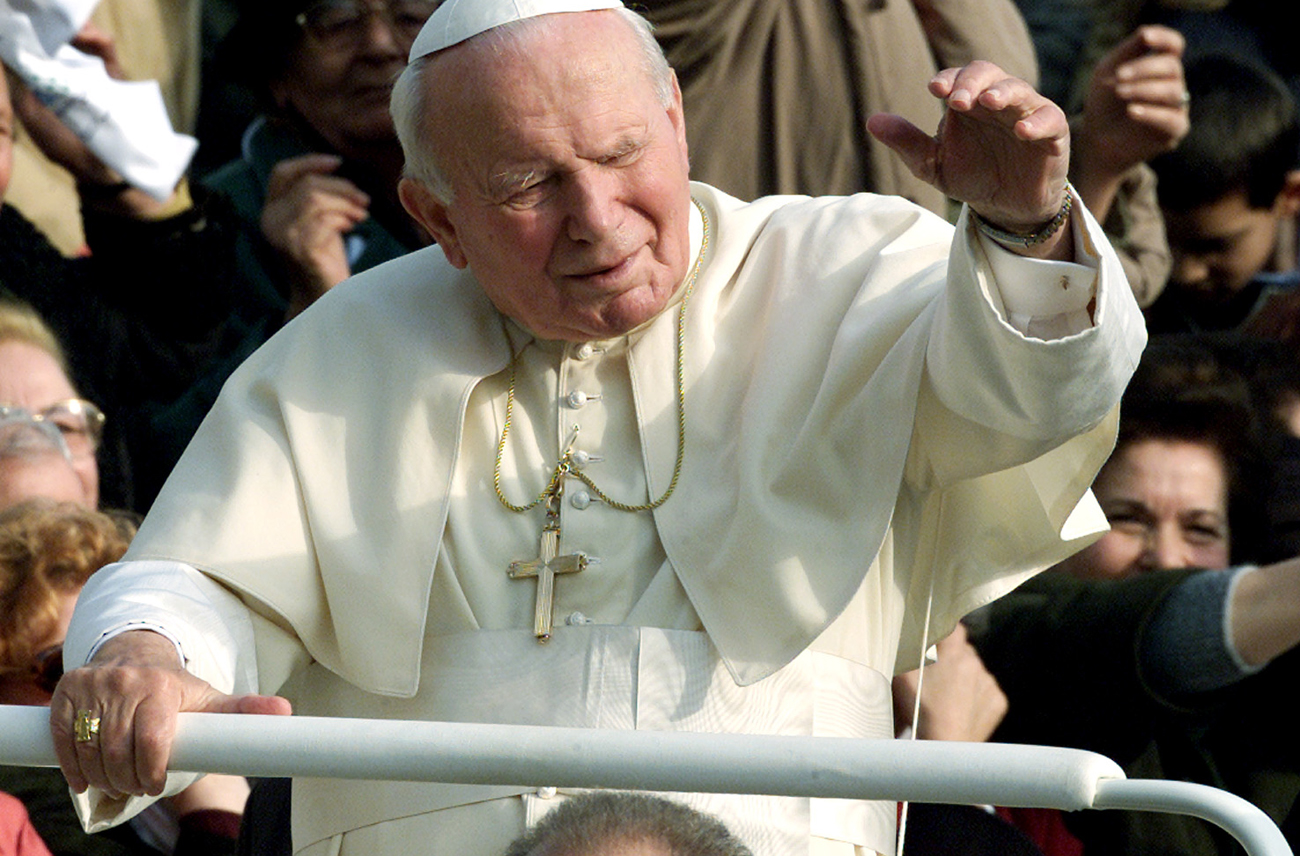 On Friday the Vatican announced Pope John Paul II will be beatified, the penultimate step to becoming a saint, on 1 May 2011. It’s exceptional because canonisation usually takes much longer – sometimes even centuries. The fast-tracking of the late Pontiff's sainthood says less about the alleged miracles he's raining down on the faithful from Heaven, than it does about political calculations of Catholic authorities here on Earth. By THERESA MALLINSON.

The Catholic Church has a strict process for canonisation. The first step is to be named a “Servant of God”, where an authority in a church, most often a bishop, will call for the person’s life to be examined. As much information as possible is gathered about the candidate’s life and, when this has been completed, the evidence is presented to The Congregation for the Causes of Saints (it sounds much better in Latin: “Congregatio de Causis Sanctorum”).

The next stage is for the saintly candidate to be declared “Venerable”, and heroic in virtue. This means they exhibit the Seven Virtues (yes, as opposed to the better-known Deadly Sins) of prudence, justice, restraint or temperance, courage or fortitude, faith, hope and charity or love to a heroic degree. The fourth stage, where things start to get really exciting, and which Pope John Paul II has now attained, is beatification – which requires the candidate to have performed a proven miracle. Upon being beatified, the saint-in-waiting is granted the honorific “Blessed”, and Catholics are encouraged to pray to him or her for intercession.

At an unspecified stage in the proceedings, but occurring before canonisation, a declaration “Non Cultus” needs to be issued, meaning (as it sounds) that a cult hasn’t formed around the potential saint, or his or her tomb. Because, you know, the Catholic Church isn’t a cult.

It’s also at this stage that the candidate’s body is exhumed and “relics taken”. A first-class relic is part of a saint’s body, so we don’t really want to think about what taking the relics involves. Suffice it to say that in this case, Pope John Paul II’s body has not yet been exhumed, because of the recentness of his death. Perhaps by the time he’s sufficiently long-dead for exhumation to be considered, this macabre practice will have been relegated to Church history; we wouldn’t bet on it, though.

To be canonised – recognised as a saint – it is necessary that the candidate has performed a second miracle after his or her death. They are believed to have achieved the state of “beatific vision” – that is, actually able to see god in a literal sense. A feast day is celebrated in their honour, and believers are allowed to venerate the saint, without worrying that they’ll be accused of false idolatry.

Canonisation usually takes a fair amount of time, perhaps a few centuries. The six people who were declared saints in the last such ceremony in Rome in October 2010, died at various dates between 1489 and 1937. There’s no strict timetable regarding how long it takes to be canonised, but there is one rule – the initial investigation be opened only five years after the candidate’s death.

This rule may be waived by the Pontiff and Pope Benedict XVI did just that in the case of Pope John Paul II. The “people’s pope” died on 2 April 2005. At his funeral Italian crowds chanted: “Santo subito!” (“Sainthood, now!”). As soon as 28 June 2005, the cause for John Paul’s beatification was officially opened. On 8 May 2007 the evidence was all passed on to The Congregation for the Causes of Saints, to continue its own investigations. On 19 December 2009, Benedict signed the decree naming his predecessor as “Venerable”. And on 14 January, it was reported that the Vatican had confirmed Pope John Paul II’s first miracle (the curing of a French nun, Sister Marie Simon-Pierre, of Parkinson’s disease), with the official beatification ceremony scheduled for 1 May 2011. That’s some fast-tracking for an institution that took 367 years to issue a formal apology to Galileo Galilei.

(For the record, it was reported in 2007 that the miraculously recovered Sister Marie Simon-Pierre had suffered a relapse, although the Church denied this. Admittedly, her miracle cure has been proven to the satisfaction of several medical personnel – albeit doctors approved by the Vatican. However, cynics have noted that the happy coincidence that Pope John-Paul II’s first miracle relates to Parkinson’s disease, from which he himself suffered, will certainly add to his purported miraculous powers.)

So why the haste? According to Catholic doctrine, canonisation doesn’t miraculously turn someone into a saint. It’s merely the recognition that said person is – and always was – a saint. So it shouldn’t really matter how fast official sainthood is granted.

The thing is, while Pope John Paul II was one of the most-loved popes in recent times, earning the moniker “the people’s pope”, his views were firmly conservative, following traditional Catholic lines on issues including contraception, abortion, homosexuality and the role of women in the church. Pope Benedict XVI sings much the same tune, but, at 83, he’s not probably not going to stick around for much longer. At a time when even some Catholic theologians are calling for a re-examination of the Church’s stance on such matters, it makes sense that Pope John Paul II, and the values he stood for, be canonised as a means of further entrenching Catholicism’s teachings. Think of it as a kind of “What would Saint John Paul do?” marketing technique.

The church is reportedly investigating several claims of other miracles performed by Pope John Paul II, and his ascension to sainthood will probably occur in a few years, rather than a few centuries. Whether this will be soon enough for the Church to retain its grip on Catholics across the world, many of whom are increasingly uneasy about key tenets of the faith, remains to be seen.

Meanwhile, we predict a run on second-class relics relating to Pope John Paul II. There are five minuscule pieces of one of his vestments for sale on eBay right now, with the lowest bid at only $3.25. Imagine what they could be worth once he’s officially Saint John Paul? DM