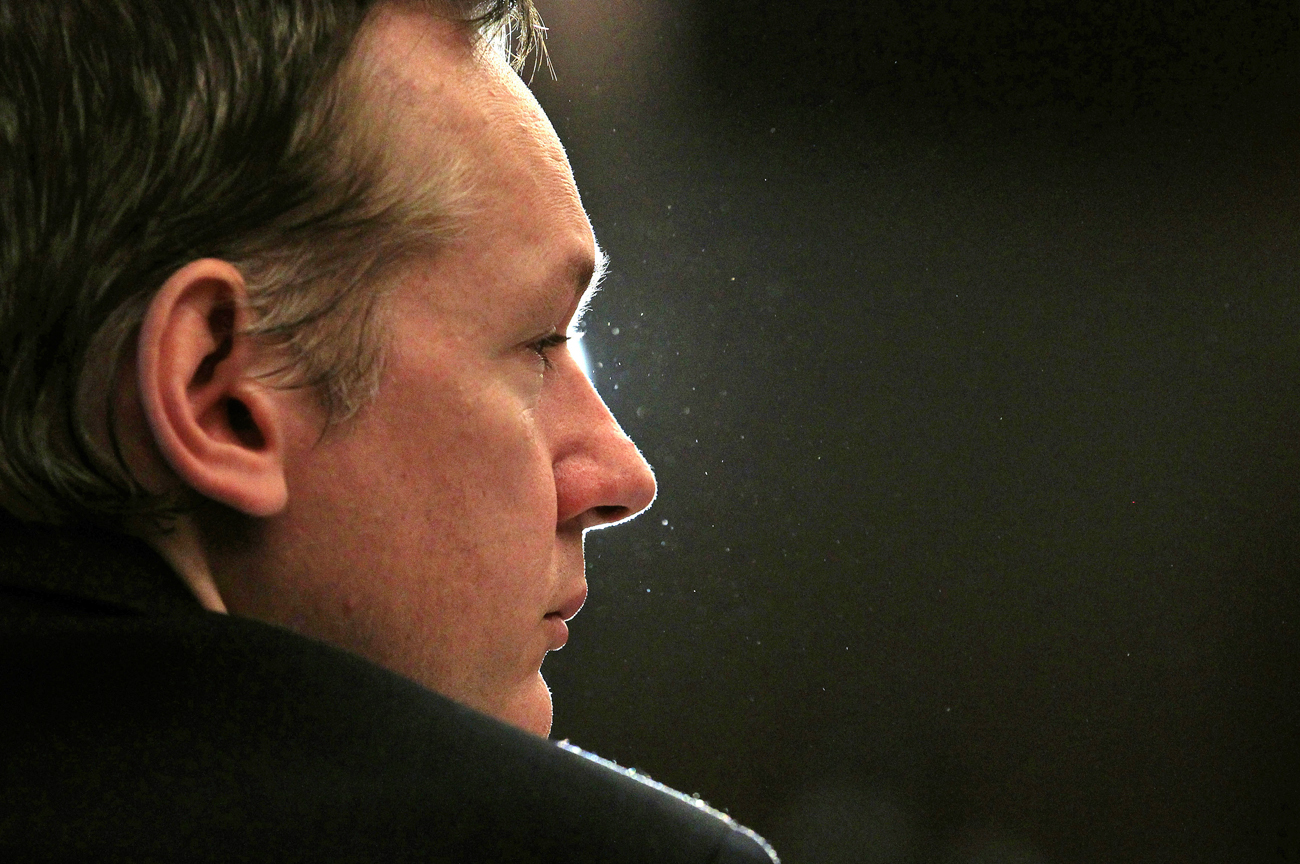 In a year of disasters, literal and figurative, and the customary cacophony of controversy they unleash, two leaks dominated headlines and conversations – one was the oil spill in the Gulf of Mexico and the other the publication of thousands of leaked secret documents distributed by Julian Assange’s WikiLeaks. For his global impact and the tectonic shift in human behaviour his organisation portends, The Daily Maverick has chosen Julian Assange as the Man of the Year for 2010. By BROOKS SPECTOR.

A few months earlier, it really seemed like the big story for 2010 would be the leak – the one in the Gulf of Mexico, that is. It was poised to be the perfect cautionary evidence about environmental disaster on a continental scale. BP’s disastrous oil spill when faulty equipment gave way was about to be the horror tale that would make a whole slew of disaster movies look unimaginative.

Ultimately, it was a disaster for BP, the company’s CEO, tens of thousands of shore birds and the livelihoods of Gulf Coast fishermen in the American south. But – miraculously, perhaps – the seas seem to be actually absorbing the vast amounts of oil as ferocious petroleum-eating bacteria feast on this temporary bounty. BP head Tony Hayward may have lost his corner office to sudden permanent retirement on his yacht, but the republic holds.

But there was that other leak as well. The one made famous and accessible by Julian Assange, the now-out-on-bail-in-the-UK, reclusive Australian computer hacker and an ostensible socio-political anarchist who just a year ago was almost unknown to the world at large. But when the Pentagon goes off and sets up an entirely new integrated defence command, you know something’s up. In May the Pentagon established the US Cyber Command, and that meant they clearly knew something was in the air.

Explaining this new command, deputy secretary of defence William Lynn went public with the comment that more than 100 foreign intelligence agencies and active military commands were trying to gain access to US computer networks. That is undoubtedly the case, but somebody seems to have forgotten that an army private, apparently armed only with some serious personal issues and a handful of high-capacity DVDs or memory sticks labelled “Lady Gaga’s greatest hits,” managed to do what all those malevolent hordes had not. Private Bradley Manning downloaded and transmitted hundreds of thousands of pages of US government and military secrets around the world by forwarding them to Julian Assange’s WikiLeaks website. From WikiLeaks, it was on to a gaggle of major newspapers that then published major excerpts of the data dump for the rest of us to ponder.

Time magazine, in its annual Person of the Year story and selection has clearly taken cognisance of a sea change in the cyberworld by naming social networking guru Mark Zuckerberg its choice for 2010. And half a billion or more Facebook users are not to be sneezed at. Curiously, and perhaps as a demonstration of the greater wisdom of crowd sourcing, the magazine’s readers’ poll gave Julian Assange the nod instead as their person of the year. Photo: Natural gas is burned off a support vessel above the source of Deepwater Horizon oil spill in the Gulf of Mexico off the Louisiana coast July 13, 2010. REUTERS/Lee Celano

Some seven years ago, The Economist (“Power to the people: Digital dilemmas”, 25 January 2003) drew attention to the trend that was still just barely beyond the horizon. The magazine’s writers argued then, “As the Internet becomes mobile and ubiquitous, it will bring about changes of its own. Precisely what these will be is not yet clear, but the earliest claims of cyber-dreamers — that the Internet will produce a shift of power away from political elites to ordinary citizens — may well become reality.”

The Economist went on to argue that the great looming trend would be the coming together of single-issue, grassroots organisations, as expressed by means of “protest politics”, such as petitions, demonstrations and consumer boycotts, and the rapidly burgeoning cyberworld. The authors concluded that, although this trend was already established before the Internet, the web’s arrival was accelerating it and “the ability to organise, proselytise and communicate at low cost has been a huge boost to such groups, be it a locally based effort to block an airport expansion or a global environmental campaigner such as Greenpeace”.

When The Economist first made this prediction, the wave was just beginning – cell phone text messaging and instant messaging were the newest big things – no one had yet given firm shape to the explosion that was to come. Now we know a bit more about what this wave looks like. Vast reservoirs of digitised material moves from places where the information’s creators have put it, even as equally vast numbers of people are in ubiquitous, near-instant communication with each other. History has offered examples of this kind of change before and that is what imbues such a new development with such predictive possibility.

In his magisterial study, “The Mediterranean”, French social historian Fernand Braudel depicted an early version of the “death of distance” as measured by the time it took to make a journey, say, between Paris and Madrid or Paris and Florence, as the trips became easier and faster in the Renaissance, contributing to the rise of the new international order of the early modern age. Then, closer to our own time, the major explosion of the supposedly dormant island volcano of Krakatoa in 1883, located between Sumatra and Java and on a crucial trade route was another. Krakatoa’s titanic eruption came just as the global telegraphic grid had come together. As a result, news of this natural disaster became known in virtually every capital of the world within 24 hours – instead of the weeks it would have taken just a few years earlier. Krakatoa gave vivid expression to a sense the world was “shrinking”. This time Assange and Zuckerberg’s revolutions, taken together, represent yet another such phase shift. Social networking now allows us to tell all our friends and followers, virtually instantaneously, the fine-grained details of our lives; both ephemeral and game-changing moments – what we’ve had for breakfast, as well as the life-shattering insights we may have had while eating it.

But riding on the back of this new climate of social networking, WikiLeaks – and the copy-cat imitators now following – has ushered in another revolution. Let’s dub this “The End of Privacy” revolution. No government, no international organisation, no business, and no individual can ever again be certain that any bit of data, no matter how secret, how hidden, how encrypted, how privileged or how proprietary, will not eventually enter the international cyber-commons and become available to anyone.

Scott Shane, writing on the implications for journalists of this trend commented in The New York Times, “Traditional watchdog journalism, which has long accepted leaked information in dribs and drabs, has been joined by a new counterculture of information vigilantism that now promises disclosures by the terabyte. A bureaucrat can hide a library’s worth of documents on a key fob, and scatter them over the Internet to a dozen countries during a cigarette break.”

The recent Foreign Policy magazine list of the world’s 100 global game changers in 2010 called attention to the importance a whole regiment of economists and international economic policy makers have had in shaping the global environment this past year, thereby casting a glance back to John Maynard Keynes’ frequently cited observation that, whether we know it or not, we are all in thrall to the ideas of some half-forgotten economic thinkers. Too true, but strangely while the editors of Foreign Policy did include leading cybernauts like Steve Jobs and Jeff Bezos in this list, they left Assange off.

But it seems Julian Assange’s website has now decisively answered Henry David Thoreau’s disparaging attitude about the utility of the mid-19th century’s newest communication tool – still quoted by those who would deride the newest technology. Just as the telegraph was stitching together the expanding American nation, Thoreau had wondered whether Texas and Maine actually had anything of consequence to say to each other over the wires. Thanks to Zuckerberg they clearly have the means to say everything, all the time. But, even more importantly, thanks to Assange, they have a whole world of things to speak about to each other. For his sheer impact on the world and the lives of ordinary people, Julian Assange is 2010 Man of the Year. DM

For more, read The New York Times, Time, Time, People and Reuters – as well as all those documents on WikiLeaks.