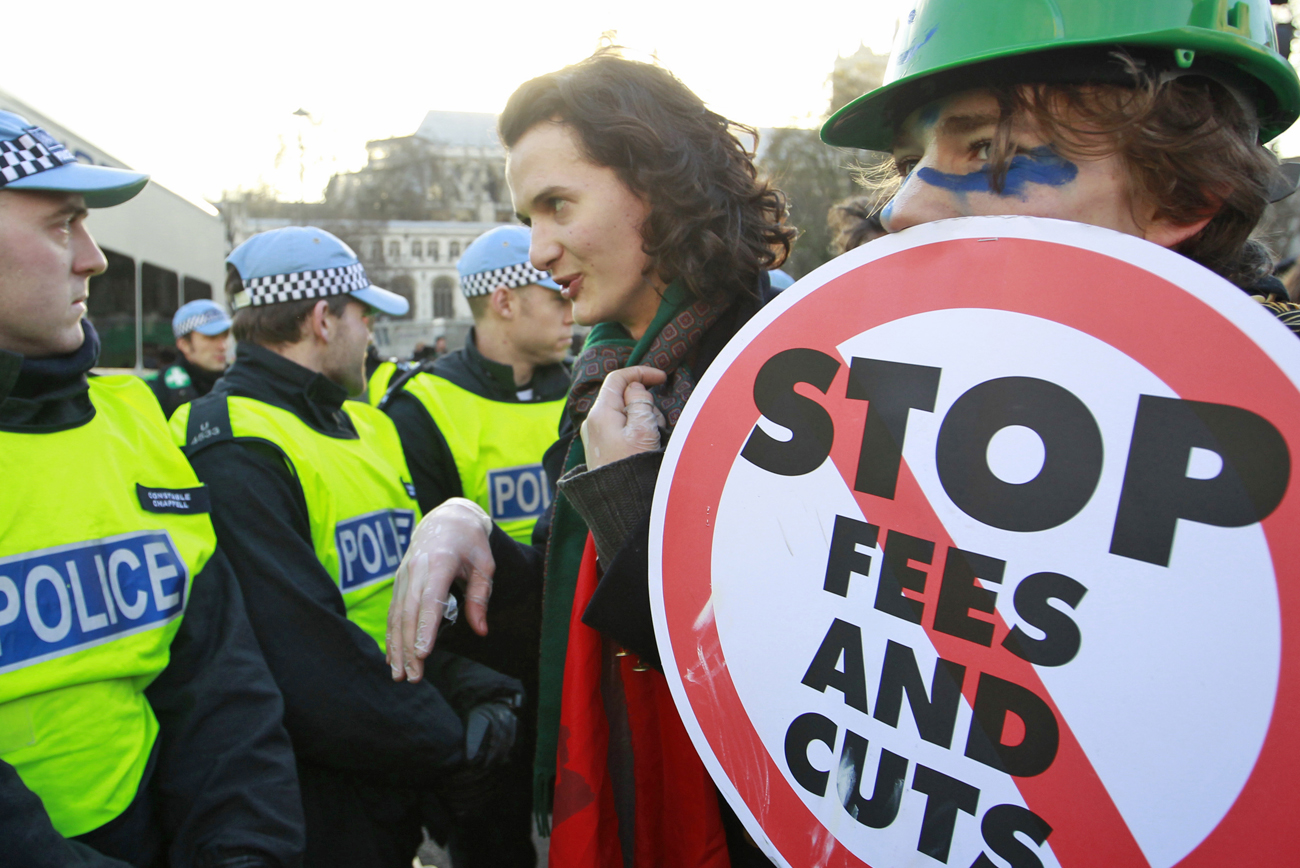 The students in London are revolting! And son of mild-mannered and unspeakably-rich Pink Floyd guitarist David Gilmour protests rising student fees by desecrating a war memorial! Or rather, exuberant young man does something silly, and is, gosh, ever so sorry. By SIPHO HLONGWANE.

It was one of those spur-of-the-moment things. A silly, studenty thing to do, natural really, when you’re in the midst of a London student protest. The protesting students (the British media call it riots – clearly they’ve never seen the Ramaphosaville informal settlement in ferment) were in Whitehall on Thursday, and a 21-year old male decided to hang off the Union Jack that flutters on the Cenotaph. But you’re not going to get away with that sort of behaviour, not when the fuzz are out in numbers and just raring to rough some students up. And definitely not when your father is prog-rock legend David Gilmour, of Pink Floyd fame.

On Sunday, Charlie Gilmour was arrested on suspicion of criminal damage and violent disorder after pictures of him hanging off the Cenotaph’s Union Jack were splashed across front pages. He issued a public apology almost immediately, saying, “I would like to express my deepest apologies for the terrible insult to the thousands of people who died bravely for our country that my actions represented.”

He called his actions a “moment of idiocy”.

His sincerity is thought to be a little threadbare, as he is understood to have defiantly defended his actions on his Facebook page. He was also photographed brandishing a massive rock and wearing latex gloves, causing some to speculate that he may have had malicious intent after all. He was also photographed trying to set fire to a heap of newspapers at the entrance of the Supreme Court.

The student protests in London were sparked by austerity plans ushered in by the British coalition government, which will allow universities to raise annual tuition fees by up to £9,000. Despite widespread and well-covered demonstrations by students in London, the House of Commons voted on Thursday to allow universities to institute the fee hikes by 2012. Things quickly soured, with 176 demonstrators already arrested, including Gilmour. On Thursday, A Rolls-Royce carrying Prince Charles and the Duchess of Cornwall Camilla Parker-Bowles was mobbed by students chanting “off with their heads”, on Regent Street, and their car was splashed with paint and a window cracked. Gilmour says that he was close to the royal entourage when the incident occurred, but didn’t get involved in that.

Charlie Gilmour is the adopted son of David Gilmour. The former Pink Floyd guitarist adopted the Cambridge student when he married his mother, the journalist Polly Samson in 1994. The young man’s biological father is the poet Heathcote Williams. David Gilmour was one of the most influential prog-rock guitarists with Pink Floyd, most famous for having written the music to “Comfortably Numb”. He joined Pink Floyd in 1968 as a guitarist during the band’s five-piece days. When Syd Barrett left (some say he was ejected) from the group in ’68, Gilmour took over as lead guitarist. However, a slow-brewing row with subsequent lead singer Roger Waters over Gilmour’s apparent underrated role in the band led the guitarist to begin solo projects from 1978 onwards. Gilmour continued with Pink Floyd, and some solo work, after Waters left the band in 1986, recording Pink Floyd’s last two albums on a house-boat he had bought and transformed into a studio. The rift was the stuff of rock scuttlebutt for many years until Rolling Stone magazine reported earlier this year: “After years of discord, Pink Floyd’s Roger Waters and David Gilmour are apparently on the road to reconciliation. After playing a short set together last weekend at a benefit for the Hoping Foundation in Oxfordshire, England, the duo plans to reunite at least once more, performing ‘Comfortably Numb’ at one to-be-determined stop on Waters’ upcoming tour celebrating the 30th anniversary of ‘The Wall’.”

According to the Sunday Times Rich List, David Gilmour is Britain’s 861st richest person, worth around £78 million. The irony of his son, who attends not-very-cheap Cambridge University,  getting arrested for desecrating a monument while partaking in a demonstration over student-fee hikes was not lost on too many people. DM

Read more: The BBC, The Guardian, Daily Mail, The Telegraph.