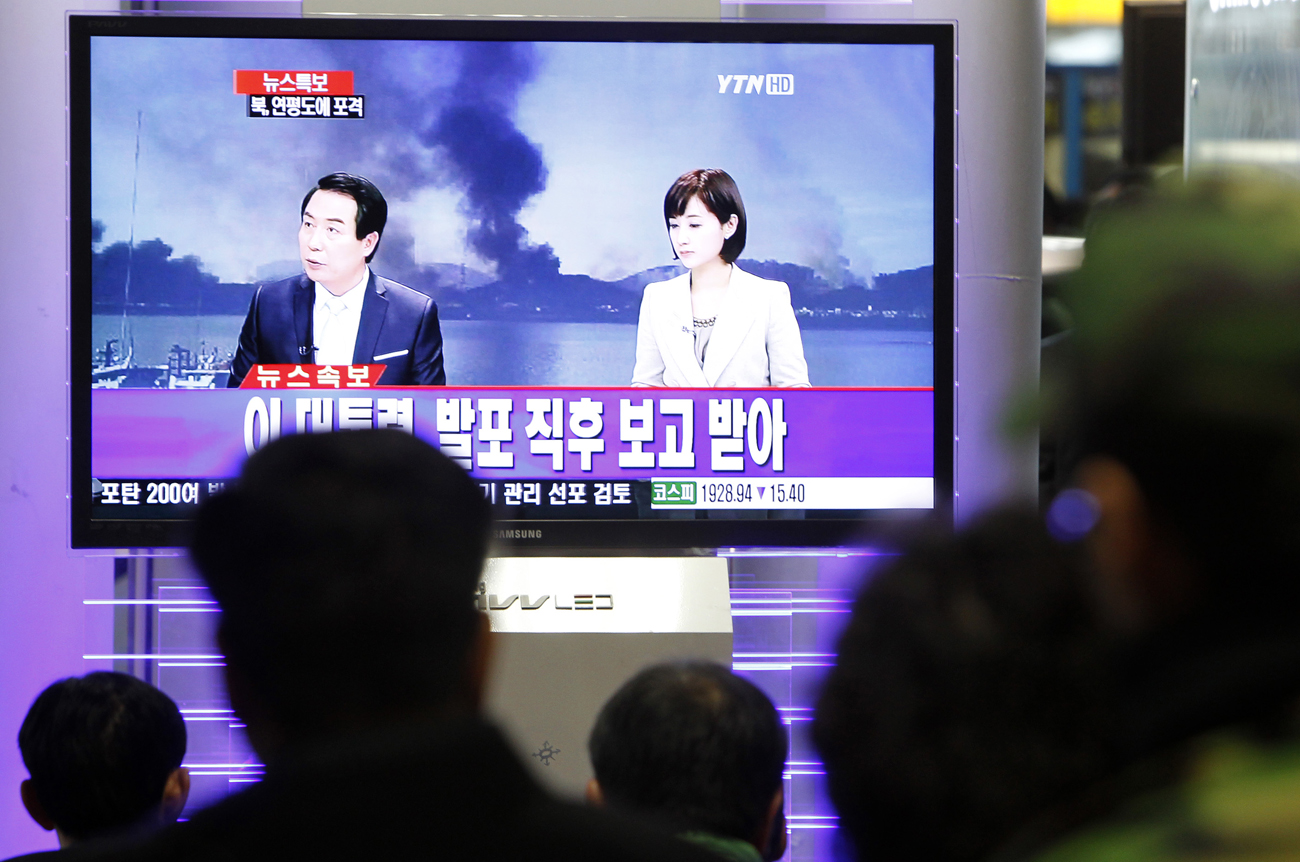 Ah, just what the world needs, another crisis on the Korean Peninsula. While global attention has been dragged towards the Irish – eurozone financial mess, the North Koreans are working overtime to regain their previous hold on world nerves. Earlier this week, the North Koreans began shelling the small island of Yeonpyeong, just beyond the 1953 cease-fire line, killing two South Korean soldiers. South Korea fired in return and analysts say that, all told, nearly 200 shells were fired off by both sides. By J BROOKS SPECTOR.

Over on Yeonpyeong Island itself, some 200 residents ran for cover and then fled by boat to the mainland town of Incheon in the South. This latest incident is one of the most serious clashes between the two sides in decades.

Yeonpyeong Island is close to where the South Korean patrol ship, the Cheonan, was sunk (presumably by a North Korean torpedo or mine) in March, killing 46 sailors. The exact course of the cease-fire line over water remains under some dispute. The overall ceasefire line was established after the three-year Korean War.

Yeonpyeong is about 3km from the Northern Limit Line, the disputed sea border of the land-based cease-fire line, a boundary the North does not formally recognise, and the island is only 13km from the North Korean coast. The island hosts a garrison of about 1,000 South Korean marines, and the South Korean navy has deployed its new class of “patrol killer” guided-missile ships in the Western Sea, as the Yellow Sea is known there. About 1,600 civilians live there as well. Naval skirmishes occurred in the same general area in 1999 and 2002. And in August, North Korea fired 110 artillery rounds near Yeonpyeong and another South Korean island. Less than a month ago, South Korea fired warning shots at a North Korean fishing boat after the vessel strayed across the Northern Limit Line.

In response to the events of the past several days, the South Korean military went on enhanced alert, what they termed “crisis status”, including readying aircraft for patrols near the area of the incident. After the North Korean attacks began, South Korean President Lee Myung-bak met with his security advisors, and his spokesman said he had ordered retaliatory strikes on North Korea’s missile base – should the North make any additional “indication of further provocation”.

Meanwhile, the North has publicly blamed the South for starting the exchange. The South has acknowledged firing test shots in the area, but denied any of these test shots actually fell on North Korean territory or crossed the water barrier between the two sides. The South Korean deputy minister of defence, Lee Yong-geul, said his nation’s artillery units had been firing from a battery on the South Korean island of Baeknyeongdo, close to the North Korean coast, but not at North Korea.

There is, of course, more to all this than an isolated, unprovoked North Korean attack. This latest incident took place as 70,000 South Korean troops were beginning their annual military drill, something North Korea had publicly condemned as “simulating an invasion of the North” and “a means to provoke a war”.  American officials brushed aside that charge, saying the South’s military exercise had been announced well in advance and should not have come as a surprise to the North. The official North Korean news agency also charged that the South had “recklessly fired into our sea area”.

All of this has come in the wake of revelations that North Korea has been secretly constructing a new, sophisticated uranium-enrichment facility, heightening fears that North Korea was planning to build a more powerful nuclear weapon than the one they have previously tested. American nuclear scientist Siegfried Hecker, a former director of the Los Alamos National Laboratory, visited North Korea earlier this month. He said he had been shown a vast new facility built secretly and rapidly to enrich uranium. Hecker said he had been “stunned” by the new plant’s sophistication where there were “hundreds and hundreds” of centrifuges that had just been installed in a recently gutted building and operated from “an ultra-modern control room”. The North Koreans claimed 2,000 centrifuges were already installed and running, he said.

Western analysts of North Korea (now there is a really rare and unusual occupational category) speculate that this newest round of tension is North Korea’s way of getting America’s attention so the US will enter into bilateral negotiations with North Korea over nuclear issues. Its overall goal would be for negotiations on North Korean terms to push the West into providing North Korea with urgently needed food aid that has been largely denied by South Korea and precluded by international sanctions.

Adding to the oddities of the North’s internal decision-making calculus, the country’s ailing leader, Kim Jong-il, has been positioning his youngest son, Kim Jong-un, as his successor. This new incident could be a way of establishing the newest Kim as a redoubtable military leader. Of course, if they really wanted US President Barack Obama’s attention, a simple phone call, email or fax might be less troublesome.

Chinese officials said they were “concerned” about developments and called on both sides to resume six-party talks that have focused on persuading North Korea to give up its nuclear ambitions. “We hope the relevant parties will do more to contribute to the peace and stability of the Korean peninsula,” foreign ministry spokesman, Hong Lei, said at a regular briefing in Beijing. The Japanese government called North Korea’s actions “unforgivable”, and the Russian foreign ministry urged restraint and a non-military resolution. Meanwhile, British foreign secretary William Hague condemned the “unprovoked attack” and urged Pyongyang to refrain from hostilities.

These developments also mean the Obama administration must now deal with yet another foreign policy crisis in which North Korea is apparently preparing to expand its nuclear arsenal, or build a far more powerful type of atomic bomb. This is a significant challenge for Obama, just as his programme for gradual, global nuclear disarmament appears imperilled at home and abroad, including the resurgent Republican Party’s challenge to Senate ratification of the new Start treaty with Russia.

Chatham House’s John Swenson-Wright called the episode “a serious escalation”, adding that “I can’t think of a recent event in the past five or 10 years that approaches this magnitude”. Obama has already called South Korea’s president to express solidarity and discuss coordinated responses. Such an effort will probably begin with leaning on China to lean on North Korea.

However, there may simply be no easy way to push the right levers and buttons in dealing with north-east Asia’s crazy aunt in the attic. The Bush administration’s point man on Korean issues, Victor Cha, says North Korea is “the land of lousy options”. According to Cha, Obama is being squeezed into picking between two unpalatable options: responding with verbal condemnations and a modest tightening of sanctions, something that has done little to halt new attacks previously; or reacting more strongly, something that could risk igniting a broader military confrontation or conflict that would turn the South Korean capital of Seoul into an enticing target. The US Navy is moving a carrier group nearer to Korea and Barack Obama has agreed to joint military exercises with the South Koreans. DM

Photo: South Koreans watch the news on television showing smoke rising from Yeonpyeong Island after it was hit by dozens of artillery shells fired by North Korea, at Seoul railway station November 23, 2010. North Korea on Tuesday fired dozens of artillery shells at a South Korean island, setting buildings on fire and prompting a return of fire by the South, Seoul’s military and media reports said. The Korean characters on the screen read, “North Korea fired on Yeonpyeong Island”. REUTERS/Truth Leem.