Land Rover Freelander SD4: Something good gets even bet...

Land Rover Freelander SD4: Something good gets even better 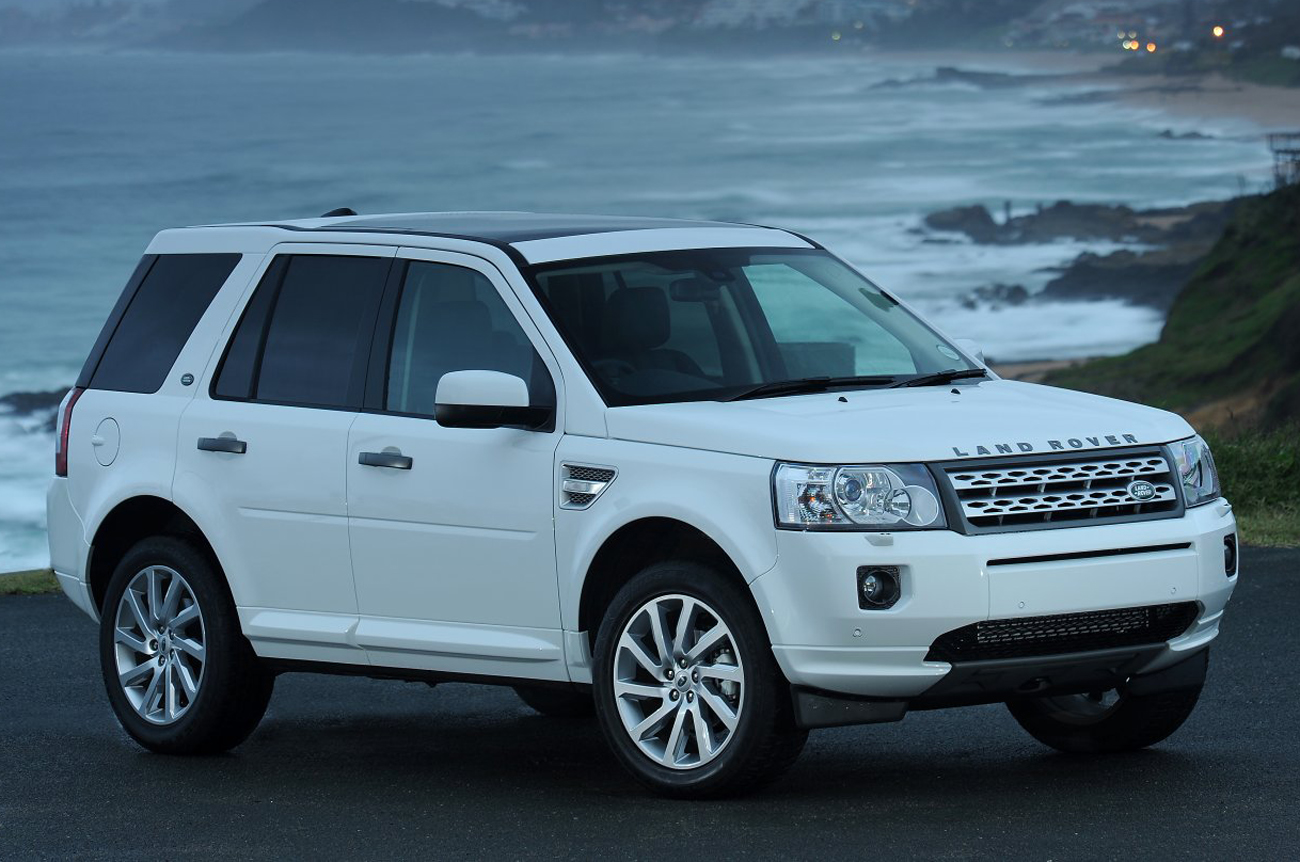 Land Rover has been riding a wave of almost unprecedented success over the past few years. The momentum for that success has largely been created by the popularity of the Discovery 3 and its successor, the further improved Disco 4. No wonder it’s easy to forget that Land Rover also produces other vehicles: Think regal Range Rover and classic Defender. For us, the most underrated member of the Landy clan is the Freelander 2. But that’s about to change. By DEON SCHOEMAN.

Land Rover’s most compact 4×4 by far is called the Freelander II – and for a very specific reason.

The original Freelander, and especially the early examples, just didn’t cut it. It  struggled with quality and reliability issues, wasn’t particularly talented in dynamic terms and didn’t fare well in resale terms either.

Thus, when the second-generation Freelander made its bow in 2007, many of us felt Land Rover would be better off calling it something completely different, rather than saddling the newcomer with its predecessor’s nomenclature – and by implication, the baggage that goes with it.

Land Rover decided otherwise, and stuck to its Freelander guns – except in the US, where it’s known as the LR2 (and the Discovery is badged the LR3). But in some ways, we still believe the Freelander II deserved a better name: like Maverick, for instance!.

You see, the Freelander II is actually a pretty decent all-terrainer. Although it employs a monocoque construction, and does without a low-range transfer case, the second-generation Freelander is vastly better than the original.

It looks like a junior Discovery, with a decent ride height and a more resolute, macho appearance. And it has a truly versatile chassis that is equally content being thrashed around a mountain pass as it is traipsing its way through mud, sand or rocks. It even gets Land Rover’s much-feted Terrain Response system, albeit in simplified form. Terrain Response is a variation on the electronic stability control system, but with multiple settings.

These effectively allow various elements of the vehicle – throttle map, steering, traction control – to be fine-tuned to best suit a number of typical driving conditions on tar and, more specifically, off the road.

That way, even the most inexperienced of off-roaders can select a mode that matches the conditions (mud and ruts, for instance) and enjoy the benefits of a vehicle that’s been optimised to cope with the terrain as best as possible. Of course, no electronic system can make up for the inexperience (or idiocy) of the driver, but it does do much to get you past that initial 4×4 For Dummies stage …

While Freelander II sales have been brisk, we’re still convinced it spends too much time in the shadow of its big brother Discovery. Which may well be the reason for Land Rover’s decision to commission a make-over for the compact SUV.

The result is a new, rationalised two-model line-up, both employing versions of the venerable TD4 turbodiesel engine. The more affordable of the two versions retains the TD4 badge, while there’s a new, more powerful derivative emblazoned with new SD4 logos. The latter’s under the spotlight here.

Don’t expect a major styling change, regardless of the derivative, however, the real improvements are under the sheet metal.

Sure, there are some subtle aesthetic improvements, but we mean subtle. At the front, the most notable change is the bolder front bumper, complete with revised fog lamp surrounds. The grille is also new and comes in two finishes – dark or bright – depending on the drivetrain employed.

Also new are the halogen projector-style headlights, while the taillight clusters get a clear lens with a black frame. Extensive colour coding creates a more cohesive appearance, while larger exterior mirrors are fitted too. The updated Freelander runs on updated alloy wheels in 18- and 19-inch diameters, again depending on model. Still, you’ll need to put the original and this latest version side by side to really spot the differences. The bigger picture – profile, exterior dimensions, wheelbase, track – all remain exactly as before.

It’s hardly surprising then that the interior also retains most of the characteristics so typical of the Freelander: The raised seating, good all-round vision and chunky but intuitive ergonomics. The changes here centre mainly around the upholstery, trim and colour choices, and have been designed to reflect a younger, more contemporary look. The instrument binnacle is completely new too.

If you haven’t stepped in and sat down in the Freelander’s cabin before, you’ll be impressed by the interior space, which is more than the all-terrainer’s compact presence would suggest.

Another welcome trait is how reassuringly upmarket everything feels, both from a quality and a comfort perspective. Those adjectives were certainly in short supply when the original Freelander made its bow, and the Freelander II is far more convincing in that respect. Passive safety is comprehensively addressed, thanks to no less than seven airbags and a host of other safety kit, such as head restraints, crumple zones and inertia-reel seatbelts with pre-tensioners and load limiters. The result is a five-star Euro NCAP rating for occupant protection.

Equipment levels are comprehensive across both models and include the likes of air-con, central locking, decent audio, cruise control and more. Split, fold-down rear seats create a versatile and capacious cargo area that’s easily accessed via the large tailgate.

However, by far the most important distinguishing feature of the updated Model Year 2011 Freelander II is to be found under the bonnet. Depending on model, there’s a choice of engines, both using common-rail turbodiesel technology, but with different outputs and gearbox pairings.

The more affordable Freelander TD4 gets a smoother, quieter and more torquey development of the familiar 2,2-litre, four-cylinder TD4 engine. Power remains at 110kW, but torque increases by 20Nm to 420Nm. A six-speed manual gearbox is the only option. The new Freelander SD4 version gets a tweaked version of the same TD4 unit, with power upped to 140kW, but torque remaining at 420Nm. This powerplant is combined with a six-speed automatic transmission.

There have been lots of detail enhancements to the entire drivetrain in the interests of greater efficiency, better refinement and improved performance. These also benefit the new Freelander’s CO2 emissions rating.

Thus, in TD4 guise, the Freelander emits 174g/km, while the SD4 is rated at 185g/km. The combined cycle fuel consumption for the two models comes to 6,6 and 7,0 litres/100km respectively.

Assisting in that respect is the start/stop system, which takes a little getting used to at first (don’t panic when the engine stops ticking over at 3 am at a traffic light …), but also helps to keep those fuel bills lower. Only offered on the manual TD4 model, it really makes a difference to fuel consumption.

Despite the reduced thirst and lower emissions of both new Freelander models, the SD is no slouch – or at least, that’s what the factory claims suggest.  The SD4 sprints from rest to 100 in 9,5 seconds, and tops out at 190km/h .

Those stats won’t impress the sports car fraternity, but for a compact 4×4 they represent pretty sprightly dynamics. Pity then that reality provides a slightly less rosy picture. While progress is brisk, the SD4 doesn’t feel as sprightly as the figures imply. Perhaps that raised ride height blunts the sensation of speed. But throttle response is tardy, and there is some turbo lag, which will be worse at the Reef’s 1,600m altitude than in the thicker, oxygen-rich air of KwaZulu-Natal, where we drove the newcomer this week.

The good news is that ride and handling are first class, allowing the updated Freelander II SD4 to show off taut chassis control. The steering lacks some precision, but there’s enough chassis feedback to keep things nice and tidy.

Off the beaten track, the four-wheel drive ensures keen grip and traction, while the taller stance and decent approach and departure angles allow the Freelander to conquer more than just shopping mall kerbs. You won’t conquer really rough stuff, but you’ll be surprised just how good the Freelander is off the road – provided it’s in the right hands.

The Freelander II is often considered cute and even feminine, compared to its larger, more imposing Discovery and Range Rover stable companions. But in reality, it’s a lot more competent than expected, while the various updates turn an already handsome vehicle into a highly desirable one.

The result?  A 4×4 with some sensible tweaks that make this updated, 2011 model the best Freelander to date. DM

See the new Freelander SD4 HSE in action on the RPM TV motoring show 1 December 2010. Full transmission details can be found on the RPM TV website.