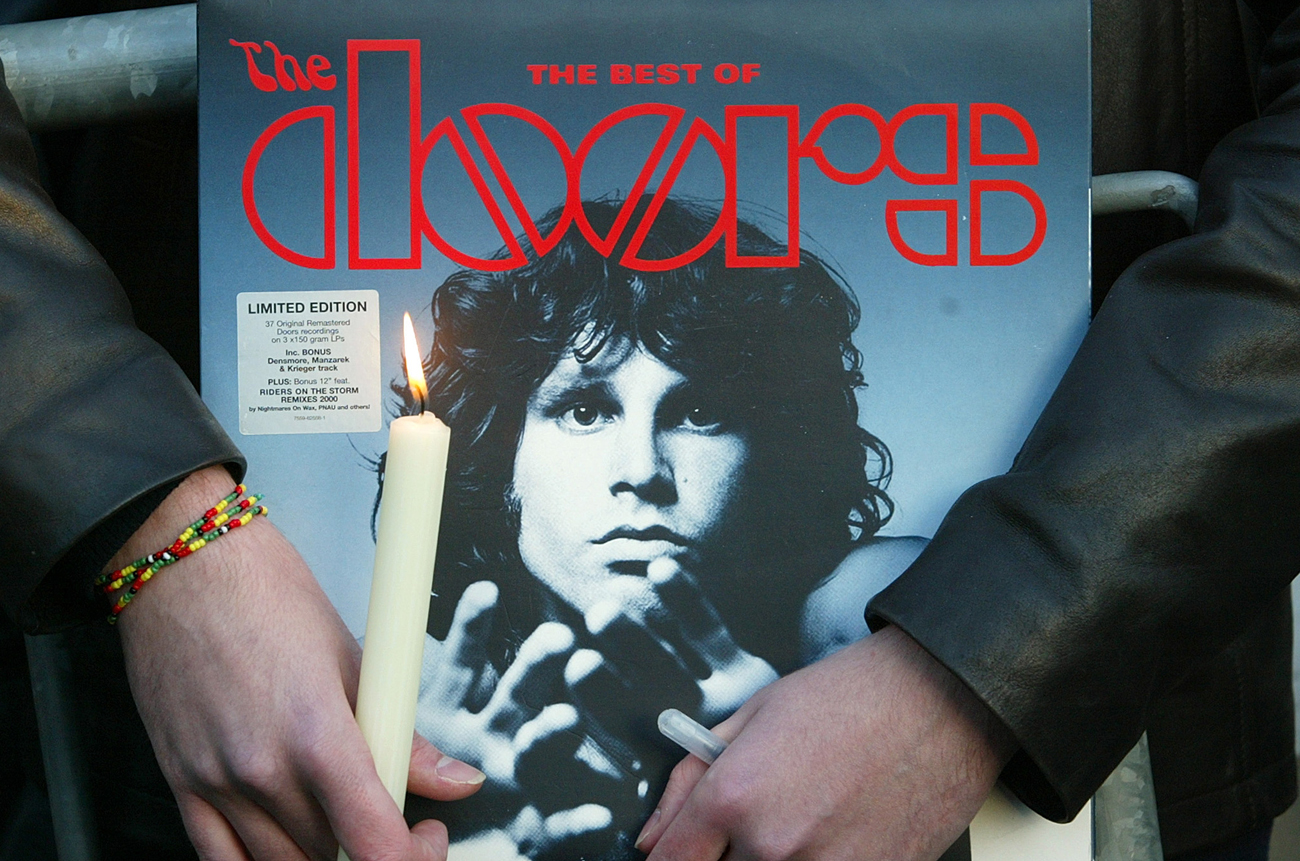 A fan holds a Doors album to commemorate Jim Morrison's death in this undated file pic.

The Daily Maverick reported in November that the outgoing governor of Florida was considering a posthumous pardon for the lead singer of The Doors, Jim Morrison. Well, nothing has been signed yet, but he said he would and now he's got the backing of the right people. A Merry Christmas and Happy New Year to you too, Governor Charlie Crist. By SIPHO HLONGWANE.

According to Florida state law, the governor needs the approval of at least two members of a four-member Clemency Board, which he himself sits on. As of Wednesday, Crist got the approval from a second board member, who was allegedly swayed by the testimony of the former members of The Doors. Ray Manzarek and guitarist Robby Krieger both said that Morrison didn’t actually expose himself, as stated in his conviction, though he did tease the crowd. The debate now is whether or not Morrison would have approved of such a pardon, with some of his more shrill fans declaring that the Lizard King would “detest” such an action. Morrison’s former bandmates welcomed the decision, saying that it would right a wrong. “Jim’s legacy is one of Dionysian madness and frenzy and of a chaotic American poet. I don’t think that the Miami episode has altered his image one iota,” Manzarek said.

According to AFP, “Governor Charlie Crist, who steps down from his post in January, must submit a request for clemency by 9 December – the date of the last clemency hearing of the year – to clear the lead singer of The Doors of indecent exposure and profanity charges.”

The charges relate to an infamous concert at the Dinner Key Auditorium in Miami on 1 March 1969, where Jim Morrison was accused of trying to start a riot in the audience, indecent exposure, desecrating public morals, profanity and other charges by the police.

Morrison was cleared of drunkenness in the ensuing trial, but was convicted of exposure (on the basis of one obscure photograph) and profanity, and sentenced to a $500 fine and six months in prison. The sentence was immediately appealed by his defence lawyers and Morrison paid bail to stay of out jail. Fearing that his appeal would fall foul of the conservative judges, Morrison fled the to Paris, where he died on 3 July 1971.

Morrison’s trial was symbolic of the times and the effect The Doors had on American popular culture. Formed in 1965 after a chance meeting between Morrison and Ray Manzarek, and later drummer John Densmore and guitarist Robby Krieger, The Doors merged blues with rock and psychedelic elements to create, alongside Morrison’s crystalline baritone, the signature sound of the late 1960s. The name of the band was taken from a line in William Blake’s poem “The Marriage of Heaven and Hell” which reads, “If the doors of perception were cleansed, everything would appear to man as it is, infinite”.

The band were frequently in trouble for their lyrics, their iconic lead singer’s stage antics and the counter-culture crowd they drew to their concerts, but what finally tore The Doors apart was Morrison’s alcoholism. During the recording of their fourth LP “Soft Parade”, Morrison would often show up to the studio either drunk or high. He was also often late for live performances, forcing Manzarek to take over singing duties.

Just before the Dinner Key Auditorium concert, Morrison attended a play by the Living Theatre, whose antagonistic style of performance art deeply affected the singer. At the concert, Morrison attempted to galvanise the crowd, and became increasingly frustrated by their lack of interest in his political messages. The show was eventually cut short by police when it became evident Morrison had little interest in actually singing.

Three days later the warrant for Morrison’s arrest was issued.

Doors fans have reportedly clamoured for years to get Morrison’s name cleared, but Crist’s predecessors in the governor’s office were unmoved. Crist himself first mentioned the possibility of pardoning Morrison in 2007, and acknowledged that there was some doubt as to how solid the case was against the frontman nicknamed the “Lizard King”. Crist will have to submit a request for clemency to the Board of Executive Clemency, which has its final meeting on 9 December (a day after Morrison’s birthday). The board, which consists of chief financial officer Alex Sink, attorney general Bill McCollum and agriculture commissioner Charles Bronson, requires a majority vote for clemency to be granted. All the board members are leaving in January, so here’s hoping that their parting shot will be that the Lizard King gets out – well, not alive, but pardoned. DM

Read more: The Hill, AFP, Time, When You’re Strange: a film about The Doors.

Main photo: A fan holds an album by the seventies rock group The Doors and a candle near the tomb of late singer Jim Morrison during a ceremony marking what would have been Morrison’s 60th birthday at the Pere Lachaise cemetery in Paris, December 8, 2003. REUTERS/John Schults.