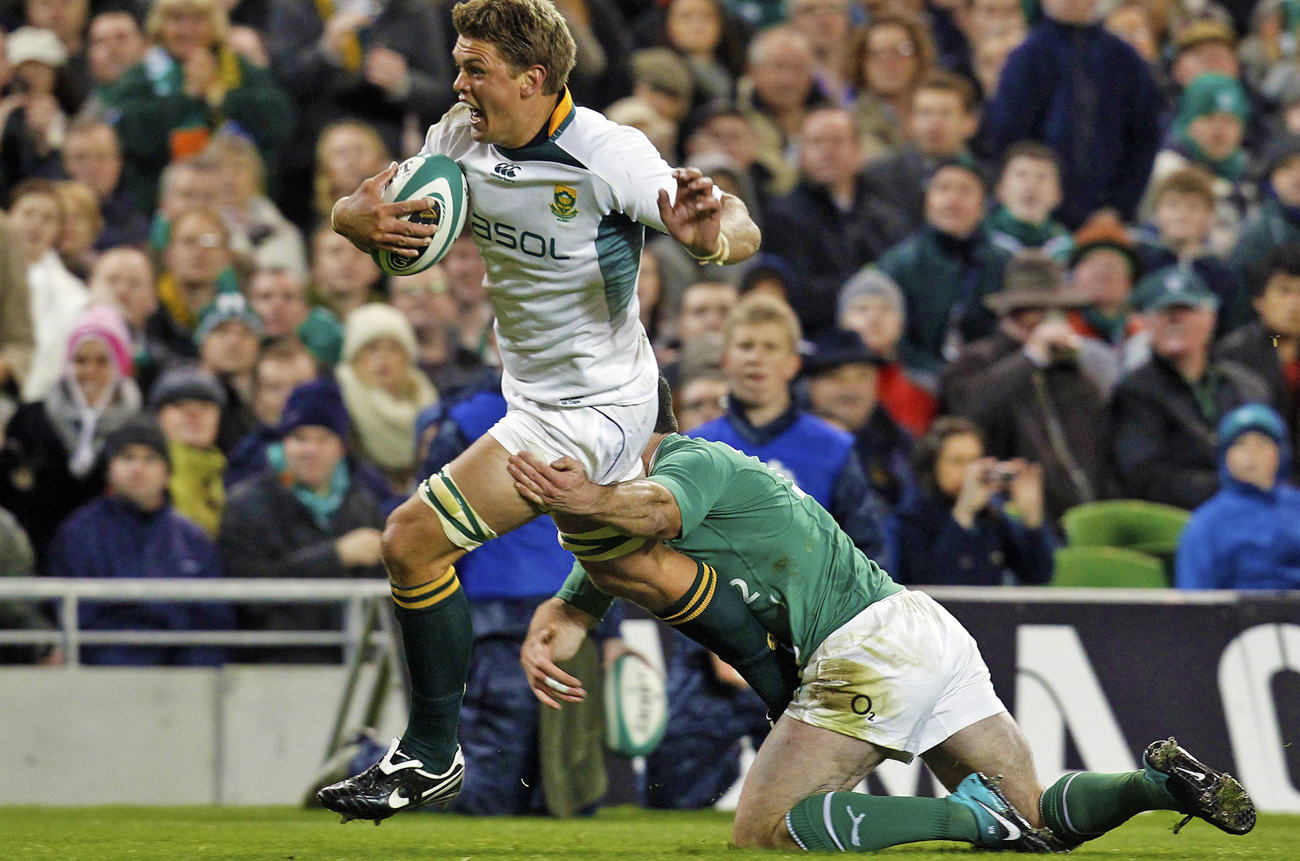 The Springboks held out against a late surge by Ireland to win 23-21, forcing our rugby correspondent, along with most other rugby writers, to eat humble pie - something Bok fan TOBY SHAPSHAK is pleased to do.

Unlike Springbok coach Peter de Villiers, I can admit when I am wrong. I’m very pleased to say I was wrong, because the end result was the most rousing display by a Springbok team this year.

Suddenly the Boks have passion, determination and commitment, and are playing, well, like New Zealand. Where was this team during the Tri-Nations? Multiphase play, retaining possession (most of the time) and a commitment at the breakdown. The pack held up, the lineout wasn’t swamped as it was last year against the same opposition.

Why then are we still concerned?

Because it could’ve gone the other way, just as easily. And the cause was the same technical naïveté  that has threatened Springbok results all year. With 20 minutes to go, the game far from won, coach Peter de Villiers pulled off key players, robbing the Springboks of momentum.

Ireland were able to score two late tries and, had Ronan O’Gara not hit the upright with his final conversion attempt, the match would’ve ended as a draw.

While the Springbok coaches did their charges no favours, the Irish mentors did. Selecting Jonathan Sexton ahead of the vastly more experienced O’Gara, they brought fluidity and continuity to the Irish attack. Coupled with P.Divvy’s suicidal substitutions (anyone remember the almost-lost first Test against the Lions last year and John Smit’s almost-won 100th Test in Soweto?), the Irish staged a late surge that almost, almost proved me right in my preview that the Springboks would lose.

If the Springboks hadn’t beaten this hopeless Irish side, it would’ve been even more embarrassing. South Africa hasn’t beaten Ireland at home for six years and in Dublin for a decade, so it will be a handy psychological way maker ahead of the World Cup next year. Hopefully, this result will be the beginning of a run of form towards the Grand Slam.

After a Morné Steyn penalty, the game turned on a moment of magic from an unexpected source. With intercept kings Jean de Villiers and Bryan Habana in the team, it was even more remarkable that Juan Smith snatched a wayward pass from Eoin Reddan and ran 70m to score. Remarkable too is that it’s the first international try for the ever-green Smith in his 66th Test.

Steyn kicked another penalty before half time and was replaced on the hour mark by talented newcomer Pat Lambie, who promptly missed his first penalty at goal as a Springbok.

But not long afterwards he showed why so much faith is being put in him with a skip pass to Zane Kirchner, who offloaded to Gio Aplon to score. Lambie converted for a healthy 23-9 scoreline.

But O’Gara, who had to suffer the ignominy of coming off the bench for his 100th cap, brought life to the luckless Irish. First his vast experience came into play with a chip-kick for winger Tommy Bowe to score. O’Gara converted, before a long pass put fullback Rob Kearney away. O’Gara hit the upright and spared the Springboks their blushes.

But between these scores, as the Springboks were losing momentum, Irish number eight Jamie Heaslip blew an overlap with Luke Fitzgerald and Brian O’Driscoll on each shoulder.

It could’ve gone against the Springboks, and suicide substitution Pete really needs a history lesson. His own suicidal history of throwing players on when it weakens the side and robs it of momentum.

The rugby gods appear to have smiled on the Springboks (but not this reporter). Long may it last. DM

Photo: South Africa’s Juan Smith goes over for a try against Ireland during the Guinness Autumn Series 2010 rugby international at the Aviva stadium in Dublin November 6, 2010. REUTERS/Cathal McNaughton