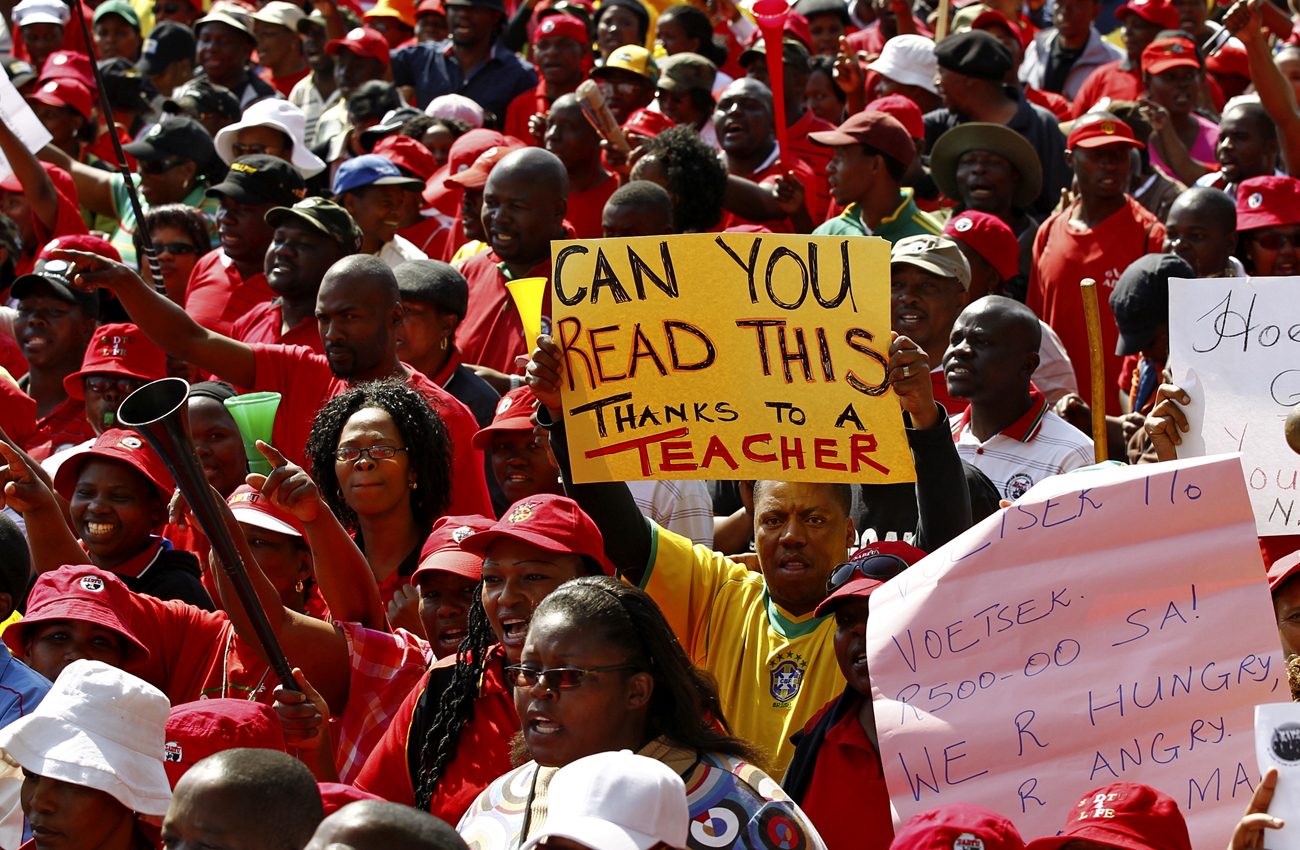 The first day of the SA Democratic Teachers’ Union conference in Boksburg was, predictably, a place of fiery rhetoric. And it wouldn't take a political genius to predict who was the target. Pity they did not talk much about education, though. By STEPHEN GROOTES.

Sadtu can sometimes be public enemy number one to parents. They’re the ones who barge into classrooms and traumatise children when they go on strike. Famously, after being on that long World Cup school holiday, its members celebrated their return to work by closing schools to hold a meeting in Soweto. Even Cosatu, to which they are affiliated, condemned that cheap and stupid stunt. Sadtu members are fiery; they’re the ones most likely to hold out for a bigger wage offer after the public servants’ strike.

So it’s no surprise that it’s their conference that’s seen some of the more stinging criticism levelled at President Jacob Zuma’s government so far. The opening moments saw some members openly booing basic education minister Angie Motshekga. We presume she was expecting it and didn’t seem to be too miffed. But the soundbite that’s getting the most airplay came from Sadtu president Thobile Ntola. This government’s “priority is classifying and declassifying information” he said. “They are not worried about poverty… they are worried about hiding information about tenders… they are worried about the fact that the media will expose all these things so they must be gagged.”

It’s funny, that’s exactly what so many other people on the other side of the political line have been saying, but to hear it in such direct terms from a member of the alliance somehow makes the point so much stronger. Ntola wasn’t finished there, and delivered a blunt critique of service delivery problems. All in all, he must have sounded a little like Helen Zille. (Don’t tell him that though, he’d probably become ill.)

Sadtu is not the biggest Cosatu member, but at times it’s the most troublesome. On this issue, the unions are once again playing the role of trying to keep the ANC on the straight and narrow. Some of what Ntola said might have been inspired by the anger he feels at government over the strike. Certainly his members are still furious about what happened and government’s stance on the issue. This would have been part of his calculations as he had thousands of members who may think he and his fellow leaders sold out by “suspending” the action. He has to channel that anger somehow. Without being too Machiavellian about it, perhaps he thought a little bit of booing at Motshekga might soothe some breasts. And the way to continue that process is to have a real go at the Zuma government, in a way that is picked up properly by the media.

But his real enemy seems to be old friends the ANC Youth League (yes, Zwelinzima Vavi was there too). “We must vow that no leader of the communist party or no leader of Cosatu speaking on behalf of their organisations will then be taken to the disciplinary committee of the ANC,” he said. And then the bite that broadcasters would love, “Over our dead bodies”. (You may remember that Julius Malema said last week he was expecting the ANC’s leadership to “take action” over Vavi’s “political hyenas” comment, which incidentally was made in the same hall; did Sadtu and Nehawu get a job lot we ask).

What we are really seeing here is the skilful use of political organisation by Vavi and company (does that include Mantashe? – Ed). By speaking in the way he does, he puts constant pressure on Malema. And while he probably does sail gaily past that line drawn in the sand by Zuma at the national general council, so long as he doesn’t become too insulting, it’s very difficult to prosecute him, without causing a huge rupture in the alliance. But Malema is being forced to respond publicly, making sure the issue continues to be in the public eye. And Malema is fighting with one hand tied behind his back because of that pesky suspended sentence. All in all, this is probably good politics by the unions.

To add to the political triangulation Ntola has made, he suggested, rather indelicately, that the ANC is not the only political party there is. He told his members to “swell the ranks of the SACP… because this government is not interested in socialism”. While we’re not expecting the SACP to suddenly become more powerful, it is a shot across the bows. He’s suggesting the ANC isn’t the only game in town, or in the alliance, for that matter.

But Ntola (and Vavi) aren’t really that angry at the ANC. They’re fighting a battle with some of the party’s darker recesses. What they really want is an ANC that works for the people and works properly. It’s about stopping the hyenas from becoming top dogs.

Interesting though, there wasn’t a huge amount of time spent on improving educational standards for our children on the conference’s first day. There was a bit, but not much. Some parents will not be amused. DM

Photo: A worker carries a placard during a strike by civil servants outside a hospital in Soweto August 19, 2010. Strikers blocked the entrances to two hospitals around Johannesburg and teachers vowed to blockade a main highway as a stoppage by more than 1 million civil servants expanded on its second day on Thursday. Reuters/Siphiwe Sibeko.