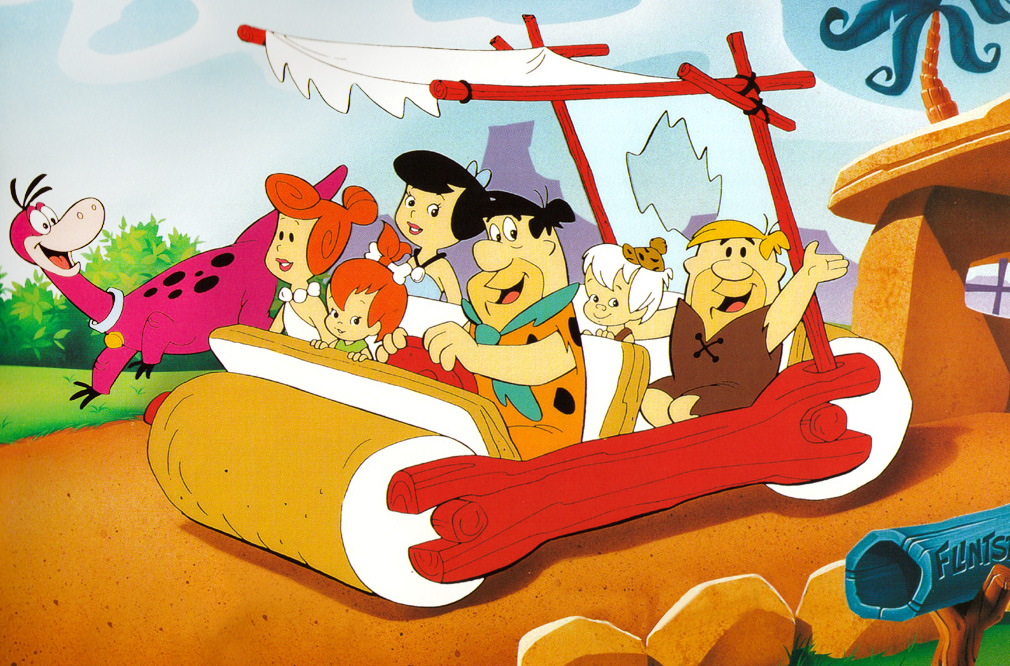 It’s only half a century since the “modern Stone Age family” trundled onto television sets in their foot-powered vehicles, but already The Flintstones seem, well, prehistoric. What’s changed since then? Quite a lot, actually. By THERESA MALLINSON

The cartoon was first broadcast in an age where cigarette advertising was still okay (with even Fred and Barney puffing away on Winstons), the US had only three national television networks (ABC, CBS, and NBC), and satire and animation had not yet been introduced, let alone in a meaningful relationship.

The series, originally conceived as the Flagstones, was produced by comedy team and business partners, William Hanna and Joseph Barbera, and first aired on ABC on 30 September 1960. The Flintstones were always just a bit more technologically advanced than viewers expected, and one can imagine the family being pretty chuffed at receiving the honour of a Google Doodle on their 50th anniversary.

In case you’ve been living under a rock (sorry, couldn’t resist), The Flintstones featured Fred and Wilma and, later on, their daughter Pebbles. They were joined by neighbours Barney and Betty Rubble, and their adopted son Bamm-Bamm. One of the main sources of humour in the series is the interplay between the prehistoric backdrop and the introduction of anachronistic modern technology – with a twist. Fred’s job is operating a crane, with the machine being powered by a dinosaur, the Stone Age equivalent of a vacuum cleaner is a woolly mammoth that uses its trunk to suck up all the dirt and the dishwasher is an octopus who can wash eight dishes at once.

While the Flintstones was originally pitched at adults, after its third season it became more family friendly. And today, the reruns on cable and satellite (Cartoon Network, if you have DSTv), primarily attract the young ‘uns. Watching the show as an adult in the 21st century, it seems fairly quaint, drearily predictable and about as funny as being hit on the head with a rock.

But despite its Stone Age setting, there was much that was new and modern about The Flintstones when it originally aired. It was the first cartoon that ran for a full half-hour episode with one storyline – before then a cartoon show would comprise three or four short animations, with a continuity presenter making up the rest of the time. It was also the first animated series to be screened during prime time. With six seasons it became the longest-running prime-time cartoon series until The Simpsons smashed this record in the 1990s (and are still creating new ones). And, of course, Fred and Wilma Flintstone were the first animated couple to be shown on prime-time television actually sleeping in the same bed. One small bed for the Flintstones, one giant leap for public mores.

These facts (well, at least the first two), go a long way towards explaining the show’s popularity. Back in the day, there were just three networks on US television, cable was only a fledgling industry, and channel hopping had yet to be invented as a national sport. The Flintstones was able to claim a prominence in popular culture that would probably not be as easily won today.

Fred Flintstone may indeed have been modelled on The Honeymooners’ Ralph Kramden, but today’s television viewers may be more interested in Fred’s progeny than his forebears. By opening up a space for animation on prime time and marketing it at adults, The Flintstones paved the way for The Simpsons, South Park and Family Guy. It doesn’t take much imagination to picture Fred Flintstone uttering Homer Simpson’s classic: “D’oh!” or, for that matter, Homer exclaiming: “Yabba dabba doo!”

Perhaps what marks The Flintstones most firmly as being from a prehistoric era is its relationship with tobacco advertising – which was de rigeur on 1960s television and radio. In the US cigarette advertising via these media was banned only in 1970, when the Public Health Cigarette Smoking Act came into effect. The Flintstones, obviously, was not subject to this stricture, and the first two seasons of the show were sponsored by Winston cigarettes.

Watch: Fred and Barney do some moonlighting for Winston cigarettes

Fred and Barney even lent the brand their character endorsement, featuring in advertisements portraying the two cavemen puffing away on their Winstons (And what did Wilma and Betty think of this? Don’t be silly, they weren’t thinking, they were doing the housework.) We wonder how long before some bright spark at an advertising agency comes up with an anti-smoking campaign featuring The Flintstones. The payoff line? Yabba dabba don’t!

Unlike those dastardly smokers, The Flintstones remain popular today. And sans cigarettes, the series is healthy entertainment for the kids – as long as you don’t let the rabid evolutionists scare you off. Last year UK educationalist James Williams from Sussex University made headlines (in The Daily Mail, if those count) when he claimed that shows such as The Flintstones (not to mention that purple horror, Barney the dinosaur) that portray dinosaurs and humans as living simultaneously, could unduly influence children into believing in pseudoscience.

Williams didn’t state whether he thought five-year-olds should be deprived of laughs to make an ideological point. We hope not. They’ve still got plenty of time to grow up and figure it all out for themselves. And if the Flintstones spurs an above-average interest in rocks, that’s a pretty damn good starting point. DM

Read more: The Telegraph, The Museum of Broadcast Communications, Wikipedia, The Daily Mail.