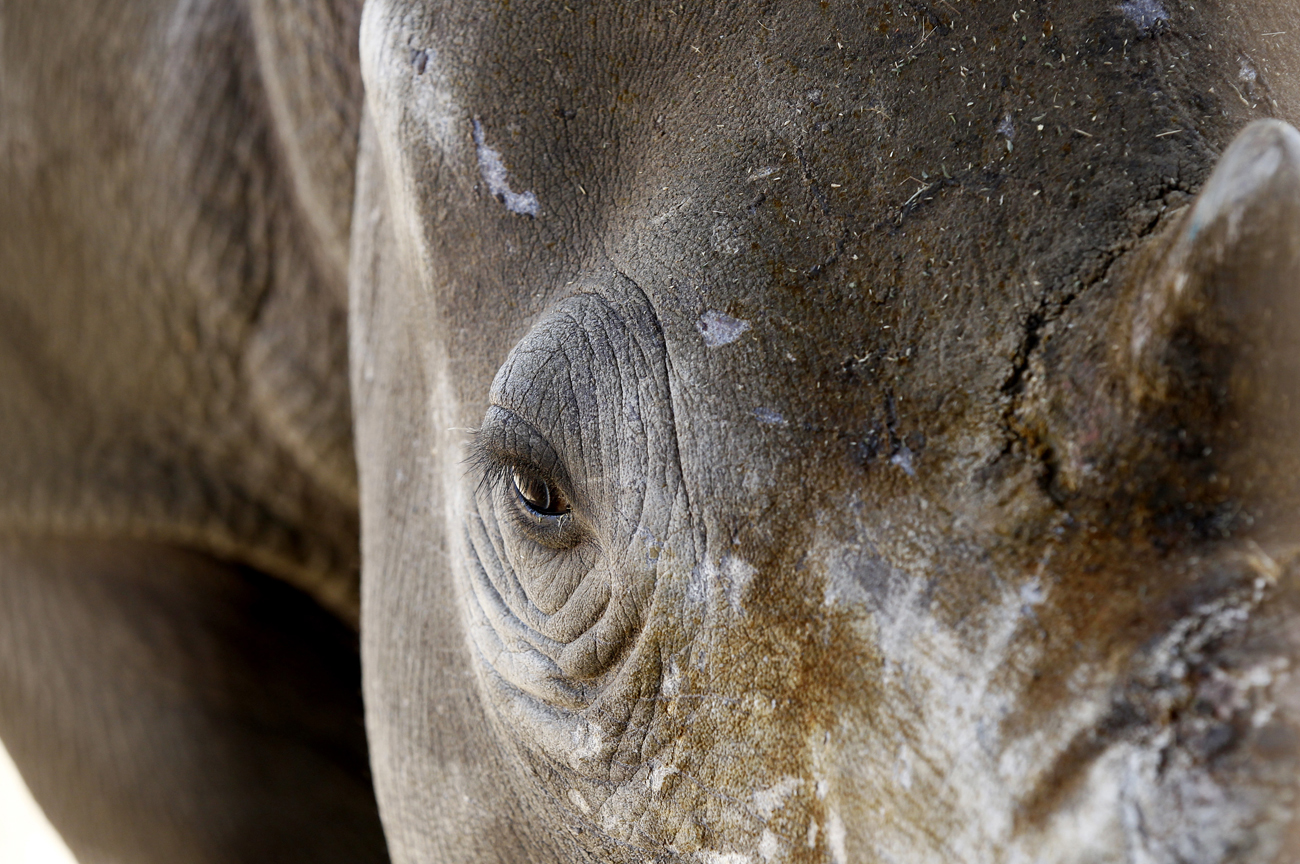 Rhino poachers, a phrase that evokes images of swarthy mercenaries in leather jackets, leading groups of natives into the still African night, AK-47 assault rifles and machetes clutched close. But as a few high-profile arrests in the last weeks show, a few otherwise trustworthy individuals have been implicated, including two vets and a game farmer. How will SA solve this huge problem once and for all? By SIPHO HLONGWANE.

Crazy as it may sound, it’s the growing middle class in East Asia that’s fuelling the demand for rhino horn, which they believe contains medicinal properties. A rumour that a Vietnamese cabinet minister was cured of cancer by a rhino horn concoction probably added to the sudden growth in demand for what is nothing more than highly compressed hair.

That, of course, resulted in the sharp spike in rhino poaching in South Africa. According to Matthew Lewis, the World Wildlife Fund’s senior programme officer for African species, previous annual averages saw 10 rhinos poached within South Africa’s national parks and hardly anything on private game reserves. Speaking to the Christian Science Monitor, Lewis said, “Thus far in 2010 alone, more than 200 rhinos were poached within South Africa, with a lot of those poached outside national parks. So that’s a more than 2,000% increase in just three years.”

Although the latent rhino poaching activities have always been carried out by opportunistic groups, organised crime syndicates are now into the game, with poachers using helicopters, night vision scopes and veterinary drugs to track down and kill rhinos.

On 19 September police in Limpopo arrested Dawie and Sariette Groenewald, a game ranching couple on a farm near Louis Trichardt. Tielman Erasmus, a contracted hunter, was also arrested. The police made the most shocking arrests in Modimolle, three-and-a-half hours to the south east of Louis Trichardt, where they took Karel Toet and Manie du Plessis, well-respected veterinarians in the area, into custody. Police arrested nine people in total, and charged them with various offences related to rhino poaching.

Local farmers were instrumental in the arrest of the Groenewalds. They tipped off the authorities about a helicopter that was spotted at a number of the poaching sites, which was traced to a company of which Sariette Groenewald is a director.
Renita Prinsloo of the Makhado district farmers’ union told the Mail & Guardian local farmers had established an information-sharing network in an effort to combat rhino poaching, and were livid to find out that the enemy was actually one of their own. “Farmers are gatvol. They’re very enthusiastic about catching the perpetrators,” Prinsloo said. “Toet and Du Plessis are well-known specialists with a good reputation in the area. Farmers are livid. They trusted these people to come on to their farms and nurse their animals. Because of their work they knew how many animals there are on each game farm and where the bomas are. They knew which farmers are businessmen and would be away from their farms. And they knew the farms’ borders.”

A South African National Parks official confirmed that some of the rhino on the farm were bought from the Kruger National Park. An expert, quoted by Rapport said rhino horn costs at least $20,000 (R140,000) a kilogram and a rhino bull’s horn weighs about 5kg – meaning one horn can fetch about half a million rand. A live rhino was valued at between R130,000 and R300,000 in South Africa. Just from these numbers, it appears that harvesting horns from legally bought rhinos is a lucrative speculation, without the fuss of tracking down, killing and hacking the horn off someone else’s animal.

It is obvious that Africa’s rhino population is under siege, and drastic measures are needed.

One such measure is the purchase of specialised sniffer dogs brought in from Ireland by Mechem, a division of Denel. These dogs are trained to sniff out rhino horn and ivory, and will be used in this country as well as Mozambique and Tanzania.

Reinhardt Holtzhausen, operational manager of Wildlife Ranching South Africa, an organisation that has proposed a controversial solution to the rhino poaching problem – the unbanning of trade in rhino horn. “We are proposing that ways to legally trade in rhino horn should be explored,” Holtzhausen said. “The emphasis would be on strict trade controls. We would never support the option of private game owners trading in the horns themselves. Horns should be handed over to government, and the government would take full responsibility for the trading in the horn. The farmer who hands over the horn can then get a compensation for the horn, even if it’s only half of the horn’s value.

“Under the current system [of completely banning the trade in rhino horn], the people involved in trading horns have been driven underground, which means that they have to rely on poachers for stock.

“There is so much [rhino horn] stock in private possession now, which farmers get from dead animals, and they don’t know what to do with the horns. It’s a liability for these people.”

However, what would stop rhino poachers from using the legal trade system to launder illegally-poached horns? “We’re very lucky in this respect,” Holtzhausen said. “In the last year or so, we’ve made massive strides in DNA identification technology of rhino horn. A year ago, we couldn’t link a horn to the animal from which it was taken, but we have that capability today.”

Efforts to launch a rhino DNA database are currently under way, said Holtzhausen. This innovation would allow authorities not only to link even small scraps of rhino horn to an individual animal, but also to isolate and investigate suspicious horns.
Holtzhausen envisions a two-step phasing in of trade in rhino horn. The first phase would be to accept horns from farmers who already hold stockpiles collected from dead animals. The second phase would be the harvesting of horns from live animals, or “rhino horn production farms”. Holtzhausen was quick to add that the feasibility of such farms has not yet been tested, and a lot of work and scientific research were still needed before any thought of implementation is entertained. “I don’t think that dehorning a rhino would be a problem if you only had two cows and a bull on your farm,” Holtzhausen said in the interview. “But we need studies to see what the effects would be in larger herds with competing bulls.”

The issue is a very emotional one, Holtzhausen admitted to The Daily Maverick, but perhaps such measures will save the rhino.

However, Morné du Plessis, CEO of WWF South Africa, said that his organisation could not support the legalisation of the trade in rhino horn. “The recent string of high-profile arrests shows that people within the private game farming industry are involved in poaching,” he said. “The issue is, therefore, a little more complicated than simply legalising the trade in rhino horn. For example, it would allow poachers to launder illegally gotten rhino horns. What we also have to realise is that it is not only South Africa that has a rhino population. And even with our level of sophistication, we’re finding it very difficult to get to grips with poaching.”

Du Plessis said education programmes were currently in place in Asian countries to combat the demand for rhino horn products from the top down, and these programmes have succeeded in other countries. He said, “In 1970, the black rhino population on the continent was numbered at 70,000. In just 22 years, the population numbers dropped to 2,500. This drop was due to the demand for rhino horn daggers that men in Yemen wore. But through education programmes in that country, the trade in these daggers is now practically zero.”

The trade in rhino horn is illegal in South Africa, as well as all 10 southeast Asian countries. In China, it’s been illegal since 1993.

However, there have been recent efforts to reintroduce rhino populations back to areas where they have been eradicated. In KwaZulu-Natal, initiatives such as the Black Rhino Range Expansion Projects, which is a partnership between the WWF, Ezemvelo KZN Wildlife and the Mazda Wildlife Fund, seek to conserve black rhinos within community-owned reserves.

The solution of educating the people who create the demand for rhino horn products involves the least amount of angrily-worded letters to the government from various conservation groups. And Yemen demonstrates that educating people can produce results. However, there’s every chance that it won’t work. Reality has a way of roughening well-intentioned, but idealistic plans. At the very least, government could upgrade the technology available to anti-poaching units and game wardens. When all else fails, perhaps we should be asking ourselves the gruesome question: Would we rather have dehorned rhinos, or no rhinos at all? DM