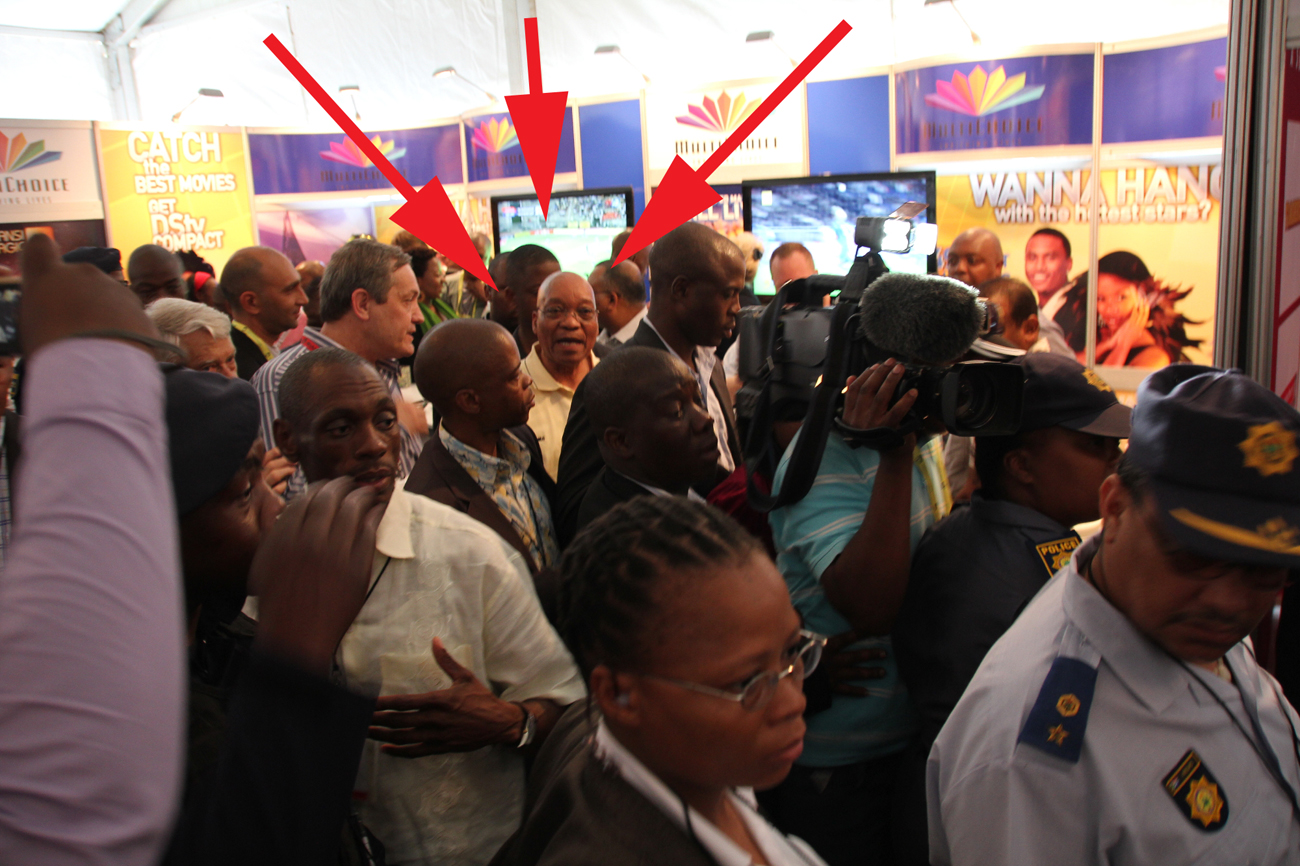 You won't find a more accurate illustration of the nature of the ANC's national general council meeting in Durban. On Wednesday morning a walkabout by President Jacob Zuma was by far the most exciting media-accessible thing to have happened at the NGC since Zuma's speech on Monday. The ANC may not like the speculation its attempts at secrecy engenders, but it sure does give Zuma centre stage. By PHILLIP DE WET.

By the time Jacob Zuma went for a walk through the ANC’s Progressive Business Forum that had been considerably spruced up; the couple of dozen companies had decorated their tiny booths with fresh flowers and had broken out the good shoes, the ones you can see your reflection in. What they got to see instead was the brief dazzle of a smile as Zuma shook each hand, and a drawn-out tussle between security and the big media scrum trying to capture the event. And perhaps the beads of sweat on his forehead, as temperatures soared inside the temporary venue.

You really can’t blame the photographers for their hunger. Since being booted out of the main NGC conference venue on Tuesday, they have had to settle for boring press-conference shots of whatever officials deigned to visit the media ghetto. Similarly, journalists have been spending much of their time on the phone to sources, even the more reluctant sources, trying to gain some insight into the discussions happening just metres away. The result has been articles that had ANC spokesman Jackson Mthembu deliver a lecture on speculative reporting and demanding retractions.

“You are just creating unnecessary problems where none exist,” Mthembu told a press conference called to discuss gender issues. Though some parts of the conference would always have been closed to outsiders, to allow more open discussion, the media was barred from others specifically to prevent trouble. One perhaps unintended consequence is that any manufactured high-profile event, like Zuma’s visit to the business outpost, becomes important. Zuma’s visit to the forum was by the way of payback; after shelling out for exhibition space, companies like DSTv, MTN Business and Top TV have apparently seen very little foot traffic, besides delegates winding their way past to reach the bar in the centre of the exhibition area. But even that is not nearly as much of a drawcard as its predecessor in Polokwane some years ago, which had the distinct advantage of being an outpost of good booze and fine cigars where none else could be found. Among the less boring of the platitudes Zuma expressed during his visit were comments on how well business and the ANC get along, which seems to be painfully true; on Wednesday the rand was creeping towards R7 even to the US dollar, despite what is expected to be a firm ANC resolution for an interventionist monetary policy. Perhaps that good relationship between the party and the business sector means currency traders just aren’t taking such intentions seriously. DM