No news is bad news for The New Age

No news is bad news for The New Age 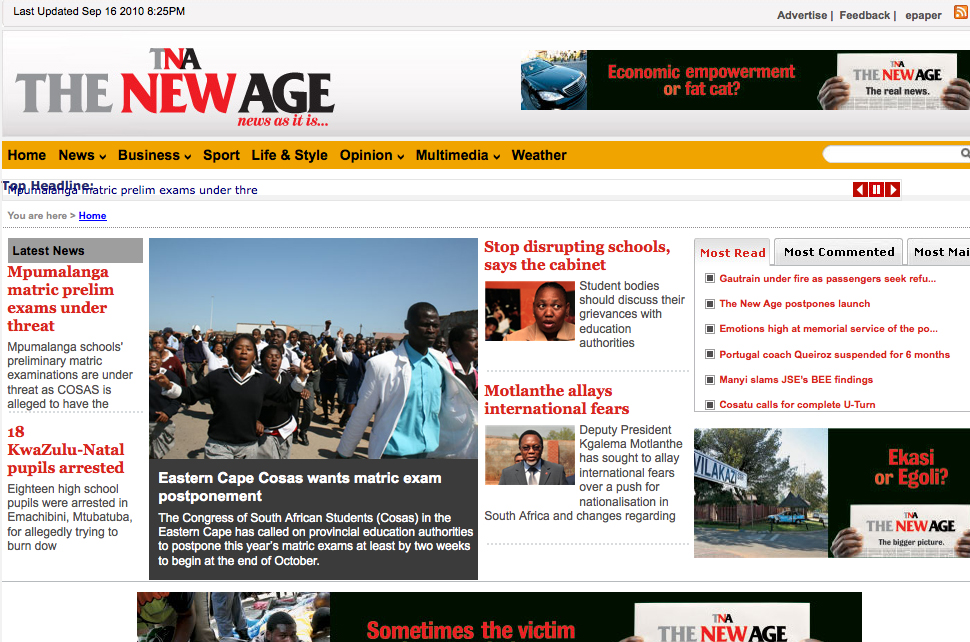 The delay in the launch of the Gupta’s sunshine press may have raised some eyebrows, but didn't really surprise anyone. It may, however, impact on their chances with crucial advertisers. By MANDY DE WAAL.

The New Age’s new editor-in-chief Vuyo Mvoko developed a case of media shyness after announcing the postponement of the daily newspaper’s launch which had been scheduled for the end of September, but which will now apparently only roll off the presses on the 20 October. “Unfortunately at this time Vuyo is unavailable for interviews until after the launch of The New Age,” the daily newspaper’s spin doctors said. “Vuyo is the only person who can comment, but as stated earlier he is unavailable.”

Spokesperson for TNA Media Gary Naidoo was also reluctant to engage, repeatedly referring to the company’s media release, but he eventually relented and said the cause of the delay was the fact that staffers were having difficulty coming to terms with The New Age’s new content management system. “We are using NewsWrap, an editorial system that we’ve brought in from India and it’s a completely new system for the people working on the paper. The team at The New Age worked on completely different editorial systems at the media that they’ve come from so it’s taken much longer than expected to bed down,” said Naidoo.

Earlier a media release distributed on behalf of Mvuko read: “We have also purchased some of the latest editorial software and other technologies, much of it new to the South African scene. These will need to be tested extensively and over a period of time to guarantee our ability to produce consistent quality on a daily basis. We also have to train our staff on the use and management of our new systems. We are confident that once these processes are complete, we can deliver to our readers an aesthetically pleasing, editorially sound and fresh product that will be relevant to their lives and add to the diversity of voices in our country’s media.”

Media buyers, however, are less than impressed. Mike Nussey of Mediaedge:cia said the pro-government daily would need to deliver strong audience figures and keep its promise of providing compelling regional news if it is to attract advertising attention. “The New Age came to see us and was aggressively selling advertising for the daily’s Heritage Day supplement planned for the 24 September. This is the first I hear of them postponing the launch which doesn’t bode well. As a media agency we recommend advertising based on a title’s credible record, good audience figures and excellent print product. Our response to The New Age was: ‘Bring us the paper, and not a dummy, before we can even think of advertising.’ There’s no ways we could make a decision without seeing the end product.”

Nussey said audience figures and circulation were crucial in decision-making in the media buying process and that The New Age would have to prove its reach before they’d be considered by advertisers. “It doesn’t just cut it to say to us that the newspaper will be distributed to government departments. From what I’ve seen on television and witnessed during the strikes, government departments hardly hold value for advertisers. The newspaper business is tough and increasingly isn’t being bought by younger people. Younger demographics are interested in mobile phones and the Internet. It’s a declining market where only the strongest players are surviving and actively growing.”

ThisDay was a ghost in the market, said Nussey, who added that the demise of the title still loomed large in marketer’s memories and had spooked the industry somewhat. “Look at ThisDay which hung in there month after month before eventually collapsing. Although it’s a while back, this made advertisers more reticent about readily investing in new titles that haven’t been established,” he said.

Nussey said The New Age’s postponement would be detrimental to the brand because it would make advertisers wonder whether they have the mettle to stay the distance. “Advertisers need to be assured that The New Age has what it takes to run a daily operation. The fact that they pushed advertising sales without a product and then announced a delay looks really bad, and may raise questions about their ability to deliver.”

This view was shared by The Media Shop’s Harry Herber, a veteran in the media industry who said that delays in the print news sector weren’t uncommon. “The New Age hasn’t come to see us yet, but the fact that they’ve postponed isn’t unusual for the industry. It’s a difficult market although there have been successes as witnessed with The Daily Sun. What will be a factor is the big advertising spend for the 2010 Soccer World Cup. The market has been very buoyant because of the World Cup and of course now there’s a correction and a tapering off of advertising spend which won’t be good news for The New Age which is launching during the tail end of that. The other question advertisers will ask is whether the launch will be delayed yet again, and whether delays are related to getting advertising support,” Herber said

One person who’s been through the punishing routine of establishing a daily press that delivers is Sunday Times editor Ray Hartley who spent many months setting up The Times which launched in June 2007. “A lot of the people working with us to launch The Times had sound experience on daily papers, and even with this behind us one of the toughest challenges was developing a daily news culture,” said Hartley. “On a daily beat you can be led by the nose by breaking stories that rearrange content priorities very quickly.”

Hartley was reluctant to be drawn on The New Age, but said sticking to announced publishing deadlines did affect credibility. “At The Times we set a launch date months ahead of the daily newspaper becoming a reality, and then did everything in our power to launch on that given date, even to the detriment of our personal lives. It’s important to a daily newspaper’s credibility that it does what it says it will do to assure the market that it can sustain the operation, create a viable audience and become attractive to advertisers. We were very fortunate in that we had the subscription base of the Sunday Times to work with which gave us immediate reach.”

Although you’ll have to wait until the 20 October to get the print version of The New Age in your hands, the online version is in beta and sporting Sapa stories such as Kgalema Motlanthe’s view that the world cup was good for perceptions about SA, that the SABC was under fire for selling news coverage to the DA and that The New Age had postponed its launch.

The NewsWrap, cross-channel editorial management system that has been blamed for the delay, can publish to various mediums including print, television, web and mobile. Used extensively in India, NewsWrap is owned by ERP and solutions company 4CPlus whose clients include a wide range of Indian local news titles as well as the Emirates Post, Qatar Tribune and The Himalayan Times. The technology company was founded by Sanjaya Gupta and it is not clear whether he is related to Atul Gupta, the man with the deep pockets behind The New Age. The Guptas are reportedly family friends of Jacob Zuma and have business dealings with Zuma’s children. DM