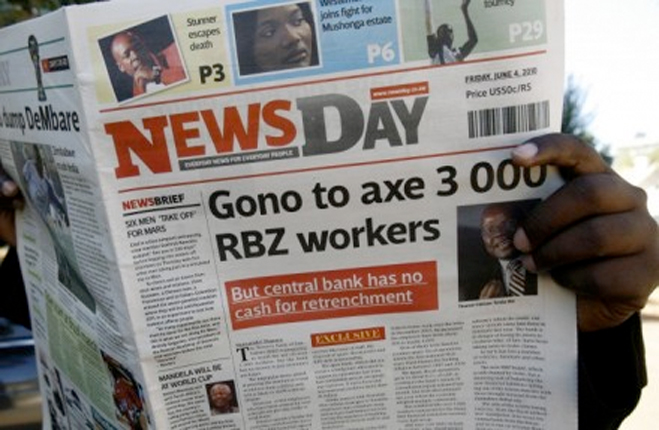 NewsDay has tripled its circulation and surpassed advertising expectations, but more importantly Zimbabwe’s only independent daily newspaper has become a much-quoted agenda-setting title in Southern Africa. By MANDY DE WAAL.

Zimbabwe’s only independent daily newspaper is giving its competition, the state-owned Herald, a good run for its money, showing that locals don’t have a strong palate for government propaganda. And that advertisers favour integrity of content too. “Given the difficult economic environment in Zimbabwe and the political turmoil, we expected that during the first six months advertising would constitute around 10% of the newspaper,” publisher Trevor Ncube said.

Results 85 days after launch have been more than pleasantly surprising. “Advertising content averages anything between 27% and 40% of the paper,” said Ncube. This is likely due to NewsDay being published by Ncube’s Alpha Media Holdings which also has five years of experience in the market, and owns the Zimbabwe Independent and The Standard. “We know the players in the market. We know the advertisers and our track record is proven. People know us as being credible and independent, and that has helped a lot in terms of making it easy for us to convince advertisers to come on board.”

After a fragile coalition government, the Zimbabwe Media Commission granted licenses for a handful of new publications and media competition in the country greatly increased. Deputy chairman of the Zimbabwe Advertising Research Foundation, Pilate Machadu, recently told BizCommunity that advertising had taken a huge blow from the economic crisis and devastated local industry, but was fighting back. “We’re not yet back to the normal levels before the economic crisis. We’re currently operating at between 40% and 50% capacity,” Machadu said, indicating that the growth had come largely from the telecommunications and retail sectors. Ncube feels there has been a revision in market attitudes and that the fear that pervaded the Mugabe era prior to the coalition government was shifting. “There was a time when advertising in an independent newspaper in Zimbabwe was risky because it meant you were supporting a publication that was critical of the government. If you wanted government contracts and so forth, that could be held against you. But that’s not the case anymore in Zimbabwe and that’s interesting for us.” Ncube said brands were looking for platforms that were independent and which had integrity. “The editorial content at NewsDay has integrity and is credible, and we believe this is why advertisers have offered the good support we’re currently seeing.”

Earlier Vincent Kahiya, NewsDay’s editor told The Guardian that despite going head-to-head with Mugabe Media Inc’s Herald, a “long-time cheerleader” for the president, the independent daily would be neutral and not favour Zanu-PF or the Movement for Democratic Change. “The media in Zimbabwe has tended to take sides. We’ve seen a damaging alignment: You are left or you are right. We want to avoid that. We shall be a different paper. Both Zanu-PF and the MDC should be able to read us without feeling offended. The people of Zimbabwe should enjoy reading us. We are focused on telling the story of Zimbabwe in an unbiased way,” Kahiya said.

What’s been heartening for Ncube is that aside from the buoyant advertising support, NewsDay is increasing circulation and becoming an agenda-setting title. “The paper is selling well. We are now printing 30,000 copies a day and our return is anything between 10% and 15%, but mostly around 10%. The majority of our sales are through street vendors across the country, but we also use retailers and put copies in shops.” When NewsDay launched, the title was printing 10,000 copies. NewsDay is also often quoted as a source of news by brands inside and outside of Zimbabwe.

A publisher long associated with influential titles and proprietor of Mail&Guardian, Ncube said the only reason he got involved in the media was because of the agenda-setting role it can play. “I am conscious of the fact that for the media to be seen to be useful in society we should play a role in shaping society in a positive manner. That is what gives me a kick and that is what excites me. We have to provide a constructive platform for debate, shape opinion and shape the way society is operating.”

Despite the issuing of licences to independent media, the political mood in Zimbabwe could change at any time and the existence of laws like The Public Order and Security Act, The Access to Information and Protection of Privacy Act, and the Criminal Law (Codification and Reform) Act showed that from a legislative and constitutional perspective, Zimbabwe was not yet a democracy. “As long as you have those pieces of legislation, you cannot but be cautious because it takes one little thing for those laws to be used against you. Right now Zimbabwe seems to be far away from an election, and the political temperature is not that high. I would think that if the political climate was high, if we were close to an election and if there were a lot of issues that were likely to be contested, then the media space in Zimbabwe could turn very ugly in a short space,” Ncube said.

Given his experience in Zimbabwe, where journalists from his titles have been imprisoned and where he’s fought for years to bring an independent daily to market, Ncube warned against the tranche of repressive bills mooted by the South African government, and the much talked-about media appeals tribunal. “It is important to realise that the moment we condone such actions we are condoning the erosion of our freedom and the erosion of our liberties. There is no knowing where politicians will stop. Once you have given them a hand, they will go for an arm. It is important to be vigilant at all times when it comes to our freedoms to ensure they are not eroded, and politicians have no right to do so. The most important thing to understand is that an attack on the media is an attack on the entire South African public. The media is simply a platform or a medium through which people express themselves. You stifle the operation of the media at the expense of peoples’ freedoms.”

Ncube didn’t have much to say about ANC national spokesperson Jackson Mthembu’s rather nonsensical attack on the Mail&Guardian. Ncube paused for the briefest moment when asked about it, and then said: “Well, I don’t know what he’s talking about so I can’t respond to that.” DM