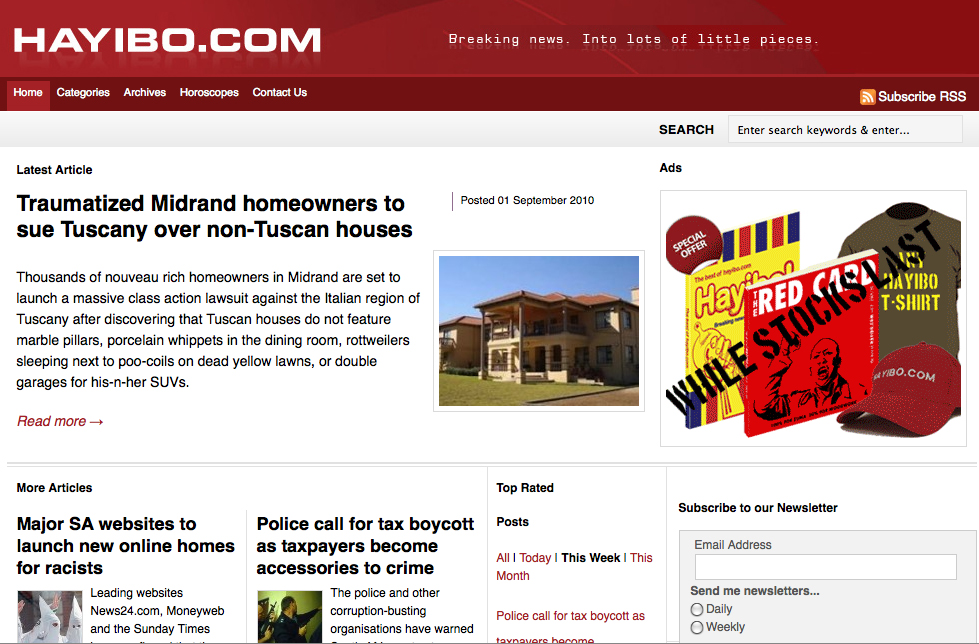 South Africa’s popular satirical site has shut shop, citing dismal advertising revenues and a fall off in syndication deals. As readers mourn the loss of bitingly brilliant content, pioneering parodists say satire is the hardest commercial sell from which to make a living. By MANDY DE WAAL.

“There’s been an outpouring of what I could only call grief, but we expected there to be extreme disappointment,” said Anthony Pascoe one of the founders of Hayibo.com. Together with friends Steve Porter and author and former Mail & Guardian columnist Tom Eaton, Pascoe delivered “South Africa’s second best source of satirical news after the SABC”. Other writers at Hayibo.com included Sam Wilson, Rebecca Davis and “Moxyland” author Lauren Beukes.

“Maybe we were very naïve; we certainly didn’t draw up a big business plan and all of that kind of stuff. We just did what we thought we had the ability to do. Our primary goal first and foremost was just to make people laugh,” said Pascoe. Pascoe said although the site achieved critical mass, advertising found the humour a little too “dangerous” for their brands. “We sat in boardrooms with advertising agencies and media buyers who loved the site and found it hugely funny, but the over-riding response was that Hayibo was too maverick and too left-field for advertisers. In recent times we lost a couple of syndication deals which were our lifeblood. The recession made buying external content more difficult and we reached a point where we were just breaking even. We don’t want to just tread water, we want to grow the site and we’ve been treading water financially for a while now so we had to take that difficult decision. We’ve reached a massive audience and we’ve had fun. We wanted to quit while we were at the top and still producing brilliant content.”

Web researcher and author Arthur Goldstuck said Hayibo.com’s demise shows the cruel reality of Internet content businesses in general and satire in particular. “It’s sad because it was such a brilliant site, and the commentary and humour was so sharp. It was a very popular site and the traffic was very healthy, but unfortunately traffic doesn’t translate directly into revenue. Eyeballs only equal value when you can translate traffic into value through advertising. And the dirty little secret of South African advertisers is that they are terrified of satire.”

Goldstuck said he learned this when he started a satirical magazine called Laughing Stock with writer Gus Silber in the 1980s. Other talent at Laughing Stock included Stephen Francis, Harry Dugmore and Rico who went on to create Madam & Eve. “The magazine ran for a year, but never sold a single advertisement. We had meetings with advertisers who loved the product, but were terrified of advertising in it because they didn’t want to offend their customers. South African advertisers are terribly conservative when it comes to satire, and are way too risk adverse to support an edgy product like Hayibo.”

“In South Africa it is hell of a difficult to find a viable market for a satirical offering,” said Silber. “People in this country are scared to tie their brand to something that is politically contentious. In the US there’s a greater appetite for satire. Look at The Onion which is highly contentious and sometimes tasteless, yet attracts big brand advertisers like Jack Daniels and Levi. In South Africa people are really scared of ruffling feathers and being associated with something that could potentially be offensive.”

Silber said another problem was that many South Africans don’t understand satire. “Only a small niche of sophisticated readers gets it. ‘The Onion’ is frequently misunderstood or misquoted as real news particularly by mainstream newspapers outside the West. A famous example of this was when The Onion ran a very funny story about Harry Potter being the tool of the devil. It was completely over the top, yet a South African right-wing religious spokeswoman found this story and kicked up such a fuss about it. When it was pointed out that ‘The Onion’ is a satirical site and this was humour it didn’t lessen the fury of this woman, it just changed the direction of her anger. Satire is a hell of a difficult field to make a living from.”

To make satire financially viable in South Africa, Silber said a publisher would need “a big benefactor with a huge sense of humour and a great sense of civic duty because brands aren’t going to do it.” Sadly this is what Hayibo.com has discovered and the site will run its last story on Friday unless a parody-loving philanthropist steps forward. DM

Read more of South Africa’s best satire (outside of the SABC) at Hayibo.com.