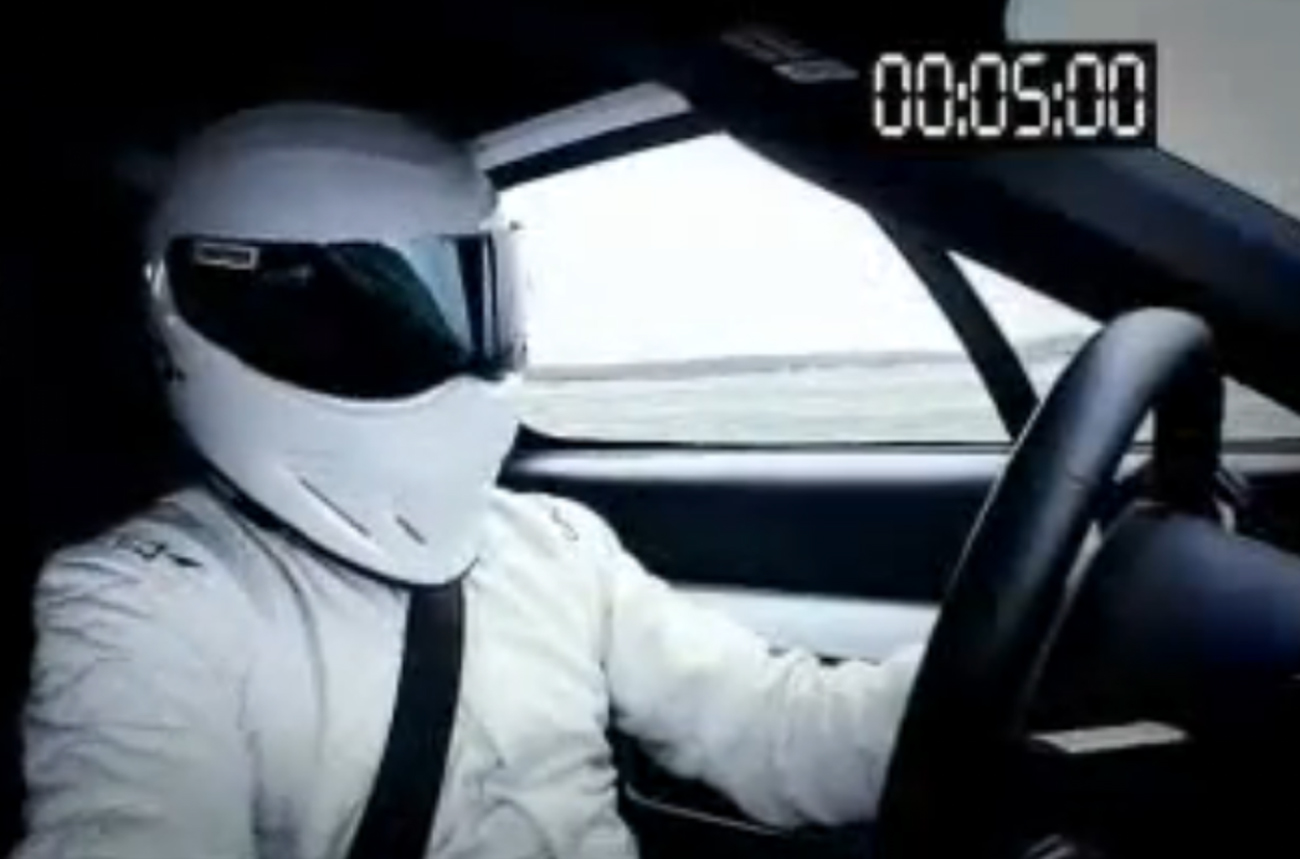 Some say he designed the Jabulani World Cup soccer ball. Others say he is the secret love child of Susan Boyle and Wayne Rooney. All we know is he may be a former race driver from Bristol.

To the uninitiated, The Stig is the anonymous test driver on the greatest TV show on earth, “Top Gear”. He appears on “Top Gear” clad in a white full-body racing suit, white helmet with blue visor, white gloves and white boots. His duties on “Top Gear”, hosted by Jeremy Clarkson, James May and Richard Hammond, include testing new cars on the show’s test track, coaching star guests for their lap in a Reasonably Priced Car and participating in sundry challenges. There are several incarnations of The Stig, like Big Stig (American), Rig Stig (complete with portly belly and lorry drivers’ tan), Vegetarian Stig a.k.a. Janet Stig-Porter and Stiggy Ray Cyrus who sports a very fetching mullet.

His true identity is the BBC’s most closely guarded secret.

Watch: The Best of The Stig:

However, we may have come as close to knowing the true identity of The Stig. The Daily Mail said in an article that records show that the anonymous racing car driver is in fact, Ben Collins, a former Formula 3 driver. According to records obtained from Collins Autosport, a company owned by Collins, it went into a commercial relationship with “Top Gear” in December 2003. The relationship consisted of “driving services provided for the BBC, mainly in the Top Gear programme”. The Collins Autosport documents show that the company believed the services provided to the BBC offered “long-term prospects for continuing income”.

The date, December 2003, offers very strong evidence to the claim that Collins is The Stig. “Top Gear” underwent a dramatic change in 2002, introducing several changes to a show that had become rather staid and tweedy. Producer Andy Wilman and presenter Jeremy Clarkson successfully pitched a new format for the show, introducing segments like the Cool Wall, the News, the Reasonably Priced Car, and the Black Stig. Like the current white Stig, Black Stig had no identity and did not talk on the show. However, in 2002 former racing driver Perry McCarthy revealed in his autobiography Flat Out, Flat Broke that he was the Black Stig, which got him sacked from the show. In perfect “Top Gear” style, Black Stig was killed off by shooting him off an aircraft carrier in a Jaguar XJ-S and into the sea. Then in November 2003, and this is the point where the astute tap their chins and say “aha”, the new white Stig was introduced.

The BBC has been very strict about keeping The Stig’s identity a secret since. Despite that Ben Collins has been fingered as a possible Stig before, amongt other names including Julian Bailey, Chris Goodwin, Damon Hill, Heikki Kovalainen, Tim Schrick , Michael Schumacher and Russ Swift.  In one famous episode, Michael Schumacher entered the “Top Gear” studio wearing The Stig’s costume, and then unmasked himself before a live audience and TV cameras. It was later revealed that Schumacher had been brought on to be The Stig in that episode because his personal specialised Ferrari FXX was driven around the track by The Stig. Jeremy Clarkson has also revealed that they often use body doubles to shoot scenes where The Stig is not required to drive.

The feverish speculation about the true identity of The Stig will seem a little silly to those who don’t watch the show, but the BBC is taking it all very seriously indeed. The Beeb’s reportedly brought lawyers in to stop The Stig from revealing his true identity in a planned autobiography. The Stig, whoever he may be, has also brought in lawyers of his own, which could make things very ugly indeed. The Stig, whoever he may be, may simply quit.  Or even more tragically, the fight could go to court, which would pretty much mean the producers of “Top Gear” would axe The Stig from the show. This has reportedly greatly upset Jeremy Clarkson. Photo: Ben Collins, maybe aka The Stig. He does look much better with his helmet on, doesn’t he? (Source: Wikimedia)

James May has said that Black Stig was released by a clause in his contract that states that, should his true identity ever be revealed, through his own willingness by a member of “Top Gear”, he would automatically be fired. Presumably, a similar axe dangles over the white Stig.

One thing is certain, the show will not be the same if the current Stig should go, given Clarkson’s particular fondness for him. There may indeed be another Stig after this one, but “Top Gear” would never be the same.