The most influential Muslim writer of them all 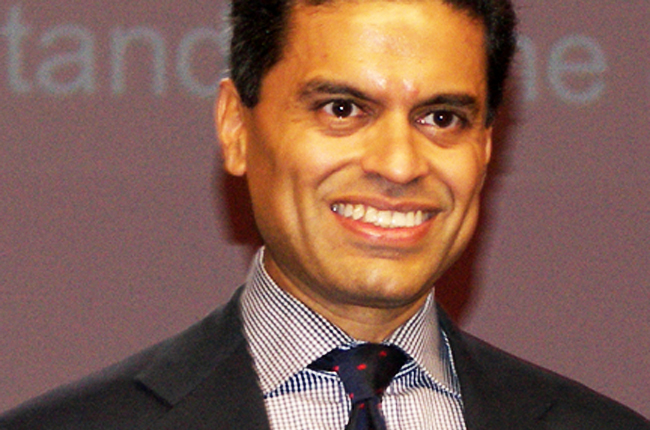 To most South Africans, Fareed Zakaria is largely unknown. Yet he is the West’s most influential Muslim writer and his work has a marked impact on the way America and the world understand Islam.

It must have come as a shock to the White House that, according to the most recent Pew Research national survey, almost 20% of Americans still think that Barack Obama is a secret Muslim – sort of like a mid-eastern Manchurian candidate. White House senior staffers were so shocked they actually felt the need to issue a media release that said Obama is a Christian who prays every day.

Mix the continuing debate about the appropriateness of building a mosque and cultural centre a few blocks from New York’s Ground Zero (site where the Twin Towers of the World Trade Centre stood) with the contretemps about Obama’s spiritual life, and it is easy to read this as a full-on debate about the place of Islam in American society. And to see this debate as being increasingly – and cynically – used by Republican politicians, candidates and their media cheerleaders as a wedge issue to take on Obama and the Democrats in the upcoming November midterm elections.

So it may also be surprising to note that one of America’s most influential and thoughtful journalists actually does have a Muslim heritage – Fareed Zakaria. Besides writing cogently about international developments, Zakaria’s career path has just made news with the announcement he is moving from Newsweek to join rival Time’s stable as its newest editor-at-large, with a biweekly column. In beating its corporate chest and hollering about this, Time managing editor Richard Stengel (also well-known as one of Nelson Mandela’s biographers) called Zakaria “one of the world’s premier public intellectuals” and a “kind of a spokesman for a post-American world”.

Zakaria’s move now brings all his efforts into one corporate tent – he already hosts the very influential and much-watched “Fareed Zakaria GPS” on CNN, which is also part of the Time Warner empire. According to Time Warner, Zakaria will also be expanding his presence on the company’s varied media platforms with his growing involvement in CNN specials as well as becoming a consultant for HBO’s documentary unit.

Zakaria commented, “All of my work will now appear at one company and, instead of a kind of awkwardness, there is a very real synergy. There is a level of sophistication in this building about content, about the ways to promote it, that’s exciting.”

By contrast, Newsweek, already rocking from other, earlier star-journalist defections, is probably in a state of acute cardiac shock. Since the magazine’s sale from The Washington Post stable, editor-in-chief Jon Meacham and senior writer and editor Evan Thomas are poised to go and the publication’s top investigative journalist, Michael Isikoff, has already defected to NBC News. Since 2000, Zakaria had been overseeing all of Newsweek’s international editions and his Newsweek cover story “Why They Hate Us” remains one of the magazine’s most decorated cover stories. His move will be a real loss to Newsweek as it attempts to restructure and rebuild.

More than a decade ago, Esquire magazine had already labelled Zakaria “the most influential foreign policy adviser of his generation”. And in 2008, Foreign Policy and Prospect magazines both named him one of the 100 leading public intellectuals in the world. In the past two years, Zakaria’s CNN show has featured in-depth interviews with leaders as varied as the Dalai Lama, Barack Obama, Manmohan Singh, King Abdullah II, Dmitry Medvedev, Muammar Gaddafi and Lula da Silva, along with many other intellectuals, business leaders, politicians and journalists.

Even before joining Newsweek, Zakaria had been managing editor of Foreign Affairs for eight years, a position he assumed when he was just 28 years old. Ouch. Among all these relentlessly time-consuming activities, Zakaria also managed to find the time to write several readable, accessible, but scholarly books that sold extremely well with the larger public. Clearly he doesn’t need much sleep or rest.

Zakaria was born in India 46 years ago, but came to the US to study at Yale and Harvard, before launching his public career.  Zakaria’s books are relentlessly supportive of fundamental American values of freedom of expression and intellectual freedom, but they simultaneously focus closely on the rise of the BRIC nations as well as various non-state players such as al Qaeda, and the challenges they pose to American hegemony. Perhaps uniquely, Zakaria brings a real non-American perspective to his evaluations of events, trends and possibilities that are still tied to that profoundly pro-American sensibility. A key element in Zakaria’s analysis comes from evaluating and interpreting the importance of ideas and ideologies in shaping the perceptual map of international populations.

If you don’t read or watch Fareed Zakaria’s work already, make time for it. With his growing international Time Warner footprint, it will be even harder to avoid him and his work. Ignoring Zakaria would be at the risk of understanding how the world is going to fit together from now.

And just maybe someone can find out the name of Zakaria’s hair stylist. Whenever he’s on TV there is never a hair out of place. Just like the words in his writing.

For more on Zakaria, go to Fareedzakaria.com and the Huffington Post. For more on the Pew survey, go to Pewresearch.org.