The New Age launches; underestimate it at your peril

The New Age launches; underestimate it at your peril 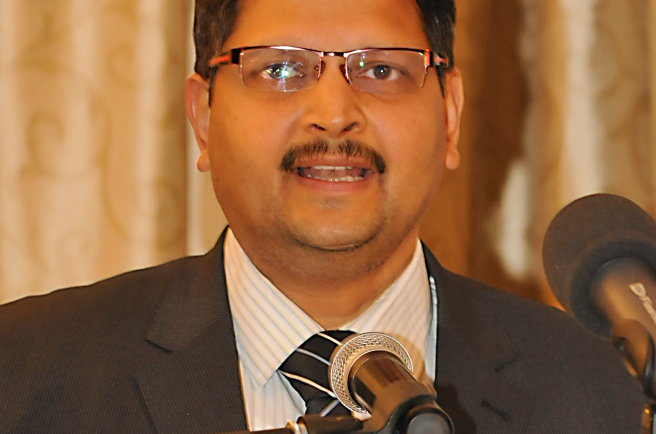 As of mid-September, SA will be getting a daily dose of good news courtesy of the Gupta family, friends to Jacob Zuma. It's easy to laugh off their positive spin, but it's equally foolish to under-rate their ability to impact the market.

When the Gupta family launched The New Age in Johannesburg on Thursday night, it was with the production values of a Bollywood movie. Backdrop: the swanky Summer Place. Elegant drinks in fluted glasses waiting at the door, hushed whispers amongst journalists about the presence of President Jacob Zuma’s son Duduzane, Atul Gupta standing on the steps facing the rolling lawn, bemoaning the negativity of local press who are chasing away investment and depressing South Africa’s indigenous.

The launch itself had Gupta, editor-elect Vuyo Mvoko and former minister in the presidency Essop Pahad facing a sea of journalists like a newly betrothed bridal party. But they were momentarily upstaged by Zuma’s son who entered the room and sat off centre, pulling a flock of photographers toward him.

The New Age’s new lifestyle editor, and former Miss South Africa, Claudia Henkel, acted as mistress of ceremonies, trying valiantly not to mispronounce anyone’s name and joking about Jimmy Choo shoes. The media contingent was massive and included everyone from Bloomberg and Business Day right through to Heat Magazine. Rousing music and familiar stock footage of happy South African faces and local infrastructure set the editorial tone, before lanky models parading mock-ups of the new broadsheet completed the scene. It created a surreal environment pregnant with the expectation that everyone would break into song and tightly-choreographed dance.

It is easy to lampoon Atul Gupta’s vision for a glass-half-full tabloid that would be press prozac for South Africa’s masses, but it would be horribly foolish to underestimate it.

Gupta has forged a strategic alliance with Bennett Coleman & Co. Ltd (BCCL) which is India’s biggest and most successful media company. BCCL is the owner of the Times of India (India’s largest daily), The Economic Times (India’s largest financial daily) and Navbharat Times (the largest Hindi daily in New Delhi and Mumbai). It owns television, radio, magazine and syndication interests. The company also has stakes in internet and mobile value-added offerings. Basically think of it as Naspers with a stronger print, as opposed to internet, division.

Reading between the lines it’s clear that The New Age has Naspers’ The Daily Sun in its sights. Speaking to Mvoko, the anointed editor, it’s clear that recent history has given the new player hope. “If you look at the later entrants [to the newspaper market] they have continued to grow while everyone else is falling. We won’t talk about sex and scandal; we’re a serious newspaper, but we believe there’s room for one more amongst what is out there,” he said. Mvoko’s talking about the Sun, which is SA’s print news wunderkind, with a circulation of close on half-a-million, and which is read by almost 3.8 million people. In an overall declining market, The Daily Sun has continued to perform very well.

According to Mvoko, the new paper is set to be just about everything for everybody. “We are talking LSM 4 to 10, which is a wide range but we believe this is doable because of the mix of the content we are going to carry and how we are going to present it. This is a newspaper for a new South Africa and it is going to do something that no other newspaper in this country does, which is to cover provinces. At least a page will be dedicated to each of the nine provinces.” In other words, Mvoko is saying he expects The New Age to be read by a young male who has some high school education, lives in a rural house and earns about R2,500 a month, who typically listens to Umhlobo Wenene FM and watches SABC 1 (LSM 4). And that the very same paper will also appeal to a university graduated city slicker who watches DStv, earns around R30,000 a month, goes to movies, loves the internet and listens to commercial radio (LSM 10).

While the reader divide might be a bit of a problem, it appears that technology could resolve the distribution issues that have typically challenged local newspapers in the trade off between cost vs reach. India’s BCCL which was here this week, nosing around at least one of Naspers’ local titles, has a decentralized press model with 11 publishing and 15 printing centres. Mvoko hinted that The New Age would be going the same route when he said: “Our newspaper will be able to reach its targeted areas as state of the art machines will be brought in from Germany and we will be printing not only in Johannesburg but other parts of the country.”

Atul Gupta talked about investing in what could be South Africa’s most sophisticated (and possibly expensive) content management and printing systems. The printing hardware will come from Germany’s Manroland AG and the primary software from SAP which will integrate with other editorial management systems. Will the editorial approach – dare we call it propaganda? – fly in SA? Speaking to Gupta before the event he said he was fed up with local media negativity. “The media is damaging South Africa by deterring investment and making people depressed with critical stories that are at times without credible sources. On the first day of the World Cup we had stories about crime in South Africa, which was terrible.” Gupta said by contrast his paper would be positive, affordable, relevant, to the point, and easy to read.

With 32 pages, the daily tabloid will cover national news, provincial news, African news, international news, entertainment, sports, lifestyle, features, opinions and business news. The initial print run is 170,000 and the first copies are supposed to be out mid-September.

TNA Media, which owns The New Age, will have Essop Pahad and former Chamber of Mines and Kumba boss Lazarus Zim amongst its board members. That will come as no surprise to people familiar with the Gupta’s mining interests. When Duduzane Zuma was asked whether he’d be involved he laughed, and said this hadn’t been made clear to him yet. Zuma’s son is involved in the Gupta family’s mining interests, while his sister Duduzile sits on the board of the Gutpa-owned Sahara Computers.

When this reporter asked Gupta how long he planned on investing in what could be an expensive business that could be slow to yield financial returns he pointedly said: “Forever.”

Canvassing journalists about why one of the country’s most successful business families would invest heavily in South Africa’s most troubled and competitive media sector the response was unanimous: “He’s buying influence.”