The Boks have a gigantic mountain to climb

The Boks have a gigantic mountain to climb 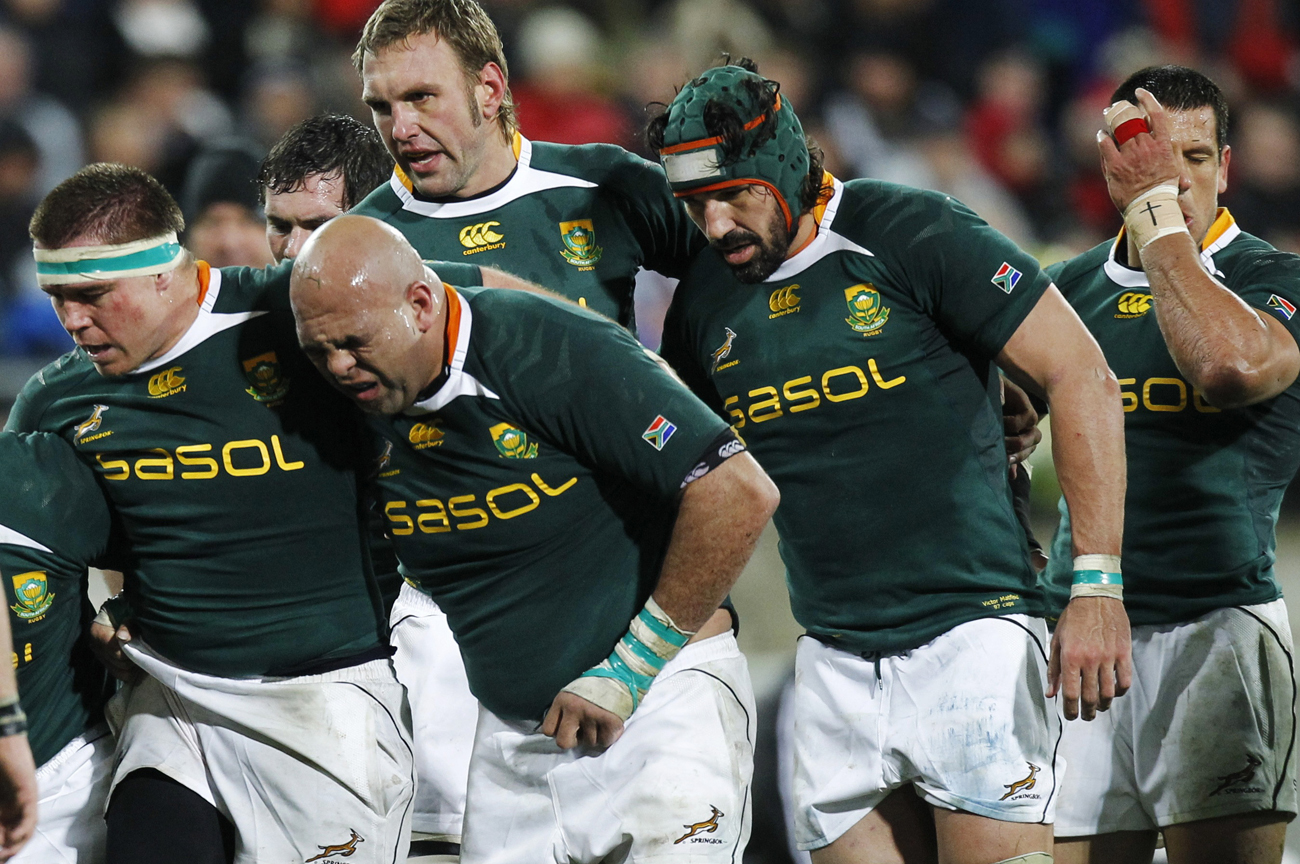 Bereft. It's a word so often used about the Springboks in match reports the last couple of weeks. Bereft of ideas, bereft of plans, bereft of passion. And here we are again...

After another failed weekend performance, we’re all trying to make sense of what happened to the Rugby World Champions in another away-Test against the All Blacks and divine the ways it can all turn out for the better.
Saturday was like watching schoolboys against men, as former coach Jake White once lamented after a Tri-Nations thrashing.

On Saturday it was 31-17 against the old foe who looked even more masterful in the face of another inept showing by the Boks, who were thrashed 32-12 in the previous week’s opener. It was almost a carbon copy. The number 4 lock did something stupid and petty (Bakkies Botha’s over-televised headbutt on Jimmy Cowan was repeated by Danie Rossouw’s slap and toe-nudge on Richie McCaw), again spending 10 minutes in the sin-bin and handing the All Blacks a 10-point margin. That Daniel Carter missed four sitters was the only reason the Boks were only down 13-7 at halftime.

All the problems from last week were still there. No penetration by the midfield (which is a crying shame considering the best inside centre in the country was out on the wing), Rickie Januarie lumbering around at scrumhalf, chipping possession away with aimless kicks, and the perennial inability to adapt at the breakdown.

Sure the referee Alain Rolland proved to be a total disaster, doing all he could to ingratiate himself with the New Zealanders in one of the worst home-town refereeing displays this millennium. He gave McCaw two official warnings when both were yellow-card offences, totally missed Rene Ranger’s no-arms tackle (that would’ve seen a South African sin-binned, and wasn’t picked up by the one-eyed citing commissioner) and any number of other match-turning calls.
Speaking after the game, Smit summed up the frustration the players, and Springbok fans, feel about how refs turn a blind eye to McCaw’s tactics: “I suppose if it had been my first year of playing against the All Blacks I’d be surprised. But it’s not my first year.”

But, as is the worst-kept secret in world rugby, South Africa has a coach who was chosen not necessarily for “rugby reasons”, as SA Rugby president Oregan Hoskins said at the time.

Peter de Villiers has no Plan B. Based on the last two weeks, it’s hard to see if he has a Plan A.

Wynand Olivier hasn’t stepped up, but now Jean de Villiers is not available, having been found guilty of a spear tackle and banned for two weeks. Gio Aplon has taken his place, but for once I agree with White about his lack of bulk counting against him. The Springboks desperately need some attacking nous at the back. Why not bring back Frans Steyn – the most gifted of players, who can also boot drop goals over from 60m out? Why is such a talent still in Europe when the Boks need all the inspiration they can get?

Januarie’s sloppy service compared to Ruan Pienaar’s polished display when he came on as a replacement have finally necessitated a change at scrumhalf, while Fancois Louw, pedigreed as he is, can’t expect his grandfather’s famous name to protect him forever. Indeed he’s replaced by Ryan Kankowski in the squad for the game against Australia, although that perhaps means the faster player is being used in a horses for courses against the mobile Australians. Dewald Potgieter takes Kankowski’s place on the bench.

Unusually, the new team was announced on Tuesday. Highly unusual. Does that sounds like panic to you? Most coaches wait until Thursday if they can, but perhaps P. Divvy is trying to see off any further speculation.

The Springbok management knows it needs to significantly change pace and direction if this year’s Tri-Nations campaign isn’t to go the way of so many before it and leave South Africa ignominiously fighting for the wooden spoon.

What to do about the hopelessness in midfield? Perhaps bring Butch James into inside centre (something must be done, for pete’s sake), while Francois Hougaard’s dream Super 14 season must count for something (at least he’s on the bench).

How did it happen that three weeks ago, after the rousing Super 14 final and the Bulls’ and Stormers’ domination, the Springboks and SA rugby were being lauded (including by this humbled reporter) and are now playing like schoolboys? How can your Super 14 teams perform so well and our national team be such a disaster?

Look no further than the compromise situation with a coach who is an embarrassment when he speaks at press conferences (where captain Smit, remarkably, is forced to play a more active role and do much of the talking) and an organisational structure designed to prop up his inadequacies.

We all thought it would be exposed during last year’s British & Irish Lions tour. And it nearly was, when he did his best to ignore Heinrich Brussouw’s match-winning qualities and only Rossouw’s concussion in the second Test got the little flanker on the field; and a last-gasp Morné Steyn penalty saved the Springbok blushes.

P. Divvy’s ineptitude is laid bare for everyone to see, the year before a World Cup. Who at SA Rugby has the balls to do something about it?

Photo: South Africa’s Springboks players react as they prepare for a scrum against New Zealand’s All Blacks during their Tri-Nations rugby union test match in Wellington July 17, 2010. REUTERS/Anthony Phelps