Bheki Cele vs the British media, a big scuffle over pre...

Bheki Cele vs the British media, a big scuffle over pretty much nothing 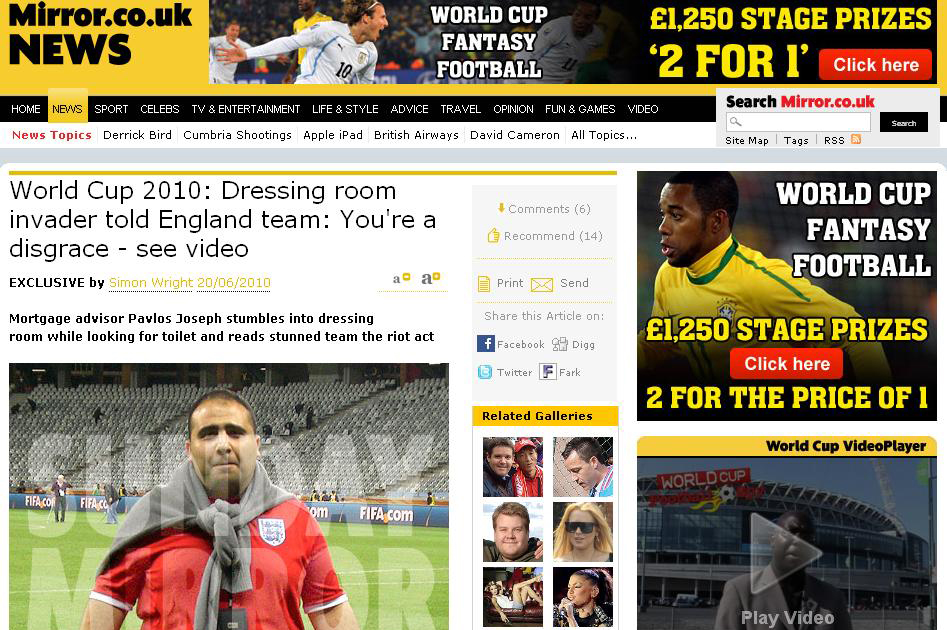 While almost none of the pre-World Cup security threats have materialised (that we know of), it does appear as if cases that embarrass The General the most are getting the lion’s share of police attention.

The Sunday Mirror’s Simon Wright appeared in Cape Town’s special World Cup court on Wednesday on charges of defeating the ends of justice and contravening the Immigration Act. This little lot follows his release on R3,000 bail, but gave General Bheki Cele enough reasons to call a media conference at which he declared that Wright was part of a conspiracy to undermine global perceptions of security at the 2010 soccer World Cup.

Times Live reports that this morning’s court play was brief as Wright’s lawyer William Booth said he intended to “make representations for the withdrawal of charges against his client” even though he had yet to see a charge sheet. The case was postponed by Magistrate Grant Engel to 7 July 2010.

Earlier the SAPF announced that the 44-year-old Wright was arrested in Cape Town on Monday evening in connection with “change-room invader” Pavlos Joseph gaining access to Team England’s changing room after the England-Algeria match in Cape Town on 18 June. Joseph was subsequently let off the hook after paying a R750 admission of guilt fine.

Joseph’s breach of security at Cape Town’s stadium caused considerable embarrassment to Cele and the police force when news reports of the security own-goal circled the globe. Frog-marching Wright to court Fifa-esque could smack of revenge more than real justice and it is likely that, if Wright is guilty of anything, it’s unethical journalism or staged reporting.

“It is ridiculous. I don’t think it is appropriate and is probably going to be counter-productive,” said Nic Dawes editor-in-chief of Mail & Guardian, saying that Wright could have set up a media “sting”, but that this required specific procedures to be fair and ethical. “South Africa doesn’t have much of a tradition of stings. I don’t think they are a bad thing per se, but you have to follow certain rules when you conduct them. When you do a report of that nature and conduct a sting you have to say so in the report, you can’t conceal it.”

Wright, who usually reports on celebrity loves affairs  for the Sunday Mirror, did post an exclusive exposé on the “dressing-room invader” featuring a tell-all interview with Joseph.

The story doesn’t mention anything about a media sting, but it did say: “And, as South African police hunted high and low for Pavlos (Joseph), unaware of his name and scouring CCTV for his face, the man at the centre of it all was calmly sitting down to breakfast with the Sunday Mirror.”

In the story, Joseph describes speaking to a security guard who pointed him to the player’s tunnel. “I walked across the grass and up through the tunnel. Eventually, I took a right, down a corridor and before I knew it I found myself in the dressing room. There was no door. The next thing I knew, there was David Beckham standing in front of me. He was wearing his grey England three-piece suit, wandering around with his hands in his pockets and looking at the floor. I froze and looked round the room. I couldn’t believe where I was.”

Dawes says, “If Wright didn’t say in his report that the story was set up, then that is very problematic. Then it is manipulating the story and not a sting anymore and is unethical journalism on his part. But I would still be disturbed if the cops are going after him just to cover their embarrassment with a whole lot of spurious charges. It will look very silly if the police are trying to cover up their embarrassment by cracking down on him. On the one hand the police want to show the world that they are being tough on security, but it sounds like the police are trying to find anything they can hang him on – which may do more harm than good.”

The SA National Editors’ Forum’s Raymond Louw said, “Of course, there is a proper way of going about a media sting from an ethical perspective. You have to abide by normal ethics. One doesn’t create a situation to create a story. That’s the implication behind the police commissioner’s accusation. Then there’s the allegation of some type of ulterior motive in running the story. On the face of things it appears to be quite an outlandish charge, although it’s difficult to comment because the charges haven’t been presented in court yet.”

The Daily Maverick contacted media company Trinity Mirror, owners of the Sunday Mirror. Trinity declined to comment, but offered a short prepared statement that read: “Sunday Mirror reporter Simon Wright was arrested and charged in Cape Town last night. He is currently on bail and will appear in court tomorrow (Wednesday). He was engaged in a legitimate story for his newspaper and any suggestion that he or the newspaper was involved with Pavlos Joseph before he entered the England dressing room is entirely false.”

SAPF spokeswoman Brigadier Sally de Beer refused to be drawn on the evidence, but said, “The national commissioner mentioned CCTV material, but the evidence must be presented in court.” De Beer said the charge of defeating the ends of justice related to Wright “concealing the whereabouts of a person knowing that the police are looking for that person”.

What the court will need to decide when it reconvenes on 7 July is exactly what Wright is guilty of. What the international media will decide is the world’s perception of South Africa and its police. As the event unfolds it is likely the SAPF may be found guilty by the global press of desperately trying to save face and of a naiveté of how the media works. This could cause another round of embarrassment for Cele and a police service which has yet to find deputy police minister Fikile Mbalula’s burglars.

For more read the BBC, Times Live, The Guardian, and Telegraph.